Freshmen Step Up to the Plate

By Tristan Lee and Jake Gilstrap 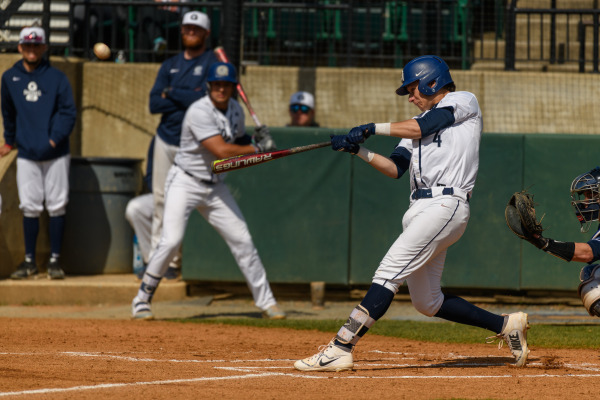 When the Georgetown baseball team opened their season on February 16 at Wake Forest’s Couch Ballpark, freshman shortstop Eddie McCabe took the field for the first time in a Hoyas uniform. McCabe was penciled into the cleanup spot, starting at shortstop, yet went 0-4 and struck out twice. Fellow freshman outfielder James Gabor flew out in a pinch-hit appearance, and freshman catcher Ryan P. Davis entered as a defensive replacement late in the game. After the Hoyas’ opening day, there weren’t many positives to take from their new batch of freshmen.

Fast forward about a month later to March 14 at Georgetown’s Shirley Povich Field. McCabe has moved up a spot. He is now batting third, but still patrolling shortstop. In the third inning, he came up to bat with runners on second and third. McCabe, on a 3-1 pitch, sent the ball into the left-center field gap, scoring both runners and extending the Hoya lead to 9-4 on a two-run double. At the end of the day, McCabe was 3-6 with six runs driven in, providing the offensive spark in a 16-9 Georgetown victory over Coppin State.

McCabe and the other freshmen quickly grew comfortable with the college game and have catalyzed Georgetown’s recent momentum. The now 16-23 Hoyas started off the year 7-20, but have won eight of their last 11 games, in part due to the freshman group’s growing comfort and improved play.

Along with McCabe, other freshmen have stepped up for the Hoyas. Freshmen pitchers Owen Lamon and Jacob Grzebinski have started a combined 14 games. Gabor, with his speed on the base paths, and fellow freshman outfielder Kai Nelson, with consistent hitting performances since recovering from Tommy John surgery, are integral bench pieces and occasional starters.

McCabe and Davis have made the greatest contributions among the freshmen thus far. McCabe cemented himself in the three-hole and started at short in every game so far this season.

“Eddie early on was a little shaky, especially defensively he was still settling into the important role that he’s done really well in,” said head coach Pete Wilk in regards to McCabe. “His first five to 10 games was still kind of an adjustment period for him.”

McCabe started the season slow, batting .200 with just two RBIs through the first eight games. Over the course of the season, though, McCabe has turned into an intimidating hitter. He sports a .295 batting average and has driven in a team-leading 28 runs, putting his RBI count at fourth in the Big East: impressive numbers for any player, even more so for a freshman.

“It’s a lot to ask of a freshman in the three hole, which is what we’ve been doing with Eddie, but he can handle it,” Wilk said. “He’s been handling it really well.”

Despite the freshmen’s success, they admitted that there was a significant difference between playing high school baseball and competing at the Division I level.

“It was the speed of the game. Not so much the pitching and how hard the balls are being hit, but the pace of the game,” McCabe said of the contrast. “Even though we’re playing nine instead of seven innings, it flies by especially playing the infield. You have to really be on top of everything all the time.”

McCabe said that forgetting about added pressure has helped him play better. “[I’ve tried] to mentally prepare for every game the same way. The support system around us is really good, and the coaches and other players tell me to just relax and do what I do,” McCabe said.

While shining offensively, McCabe is still developing his defense. He holds a .932 fielding percentage, the second lowest among starters, and has committed eight errors, tied for second most among the Hoyas. And while McCabe was an immediate starter, the other members of the talented freshman class grew more gradually into their roles.

Freshman Ryan P. Davis has also made his presence known on the diamond this season. Even after a bland 1-4 in his first start almost a month into the season, and despite joining a Georgetown team with a crowded catching staff, Davis began to see more starts behind the plate. Like McCabe, the more Davis has played, the better he has performed. Davis batted .319 in his shared playing time with seniors Richie O’Reilly and Sammy Stevens. Once O’Reilly went down with an injury, the freshman was thrust into the full-time starting job, and Davis has not disappointed in his new role.

On March 17 against Princeton, Davis put on a hitting clinic. In the bottom of the second inning, with men on the corners, Davis ripped a first pitch fastball up the middle for an RBI single, giving him his second hit of the day and Georgetown a 2-0 lead. Then, in the bottom of the fifth inning on a full count, Davis cranked a double to deep center to finish the day 3-3. Davis scored later in the inning, giving the Hoyas their third and final run in a 3-1 win. This game was no fluke for the freshman, who has a respectable .300 average and gets on base at a .389 clip, both the highest of any Hoya with as many at bats. However, like McCabe, Davis is still growing defensively. Baserunners have successfully stolen 21 of 25 attempts on Davis, resulting in a subpar 16 percent caught stealing percentage.

Davis’ improved play has not gone unnoticed by the coaching staff. “RD has just stepped in, he’s played really well and in that position, you need to be vocal and take leadership,” Wilk said. “He’s done that because that’s who he is. He’s done a great job.”

Davis has said that his catching counterparts have helped to smooth his transition to college ball.“[O’Reilly and Stevens] are aware everyone is looking at them on the field and they remain calm and collected. They don’t panic,” Davis said of his fellow backstops. “They’re in charge behind the plate and stay on top of school. They set the model for how we should act off the field.”

Davis, McCabe, and the rest of the class of 2021 had a rocky start and still have room to grow. But the recent contributions from freshmen are encouraging, not only for the conclusion of the season, but for seasons to come.

“I don’t know where we’d be without them,” Wilk said.