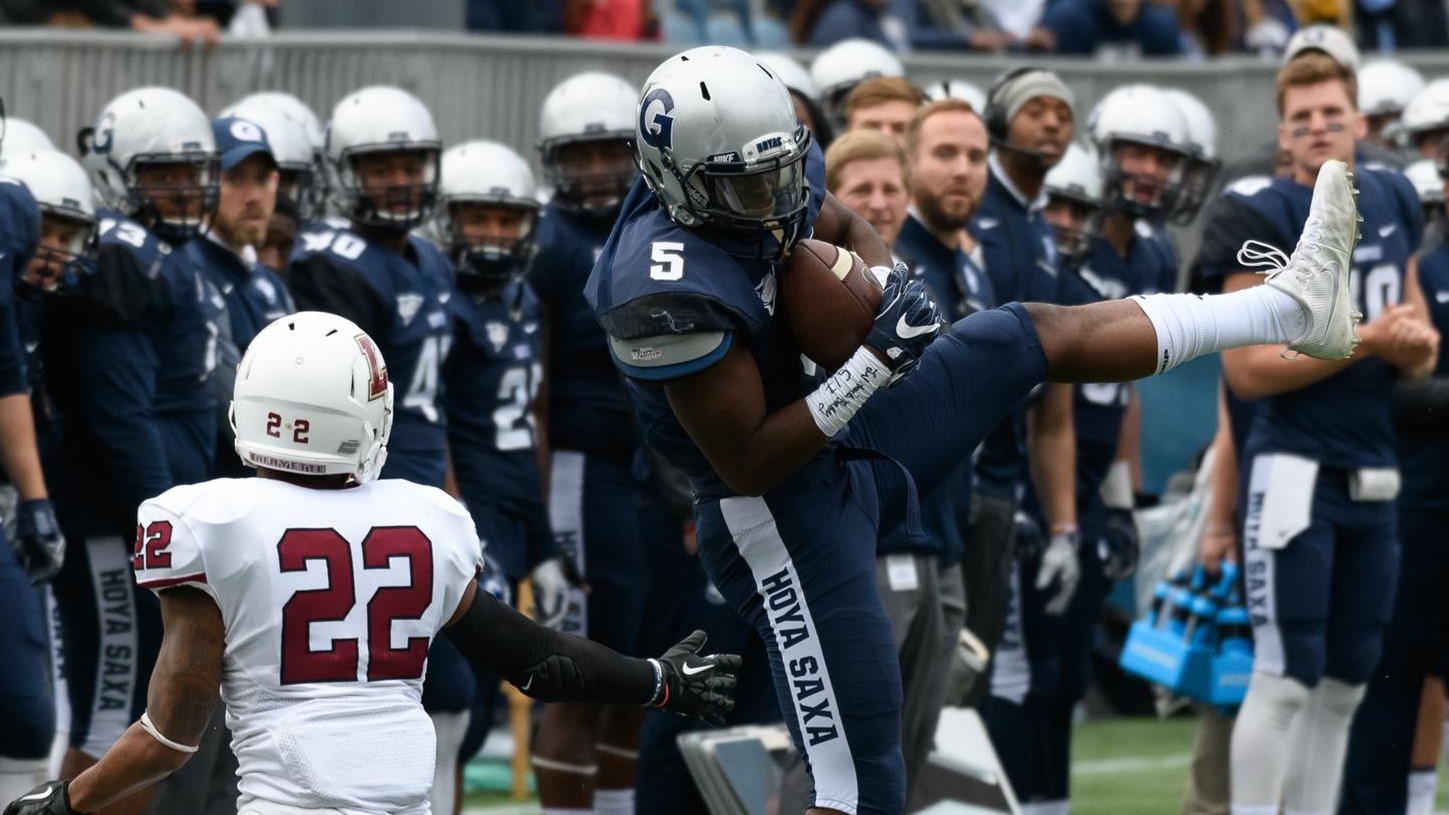 Georgetown received the opening kickoff to start the game. Their first play from the line of scrimmage was a wheel route that took the Hoyas into the Camel redzone, but Campbell promptly forced a 3-and-out, setting the tone for the rest of the game. Each team’s defensive played extremely well, as the game was scoreless until the last 58 seconds of the first quarter, when Campbell kicked a chip-shot field goal.

The second quarter was much of the same for both teams, as neither offense was able to muster much production. However, the Hoya offense showed flashes at times, advancing into the red zone twice, but were only able to come away with a pair of field goals from junior kicker Brad Hurst. The first field goal was a 45 yard laser from Hurst at the 5:34 minute marker, and his career long. Georgetown scored the second field goal just one minute later, capitalizing off of an interception from sophomore linebacker Owen Kessler.

The Hoyas looked like they had a chance to increase their lead during the two minute drill, but poor time management and a lack of timeouts led to the Hoyas running only two plays in the last 30 seconds of the half. This included the last play of the half — a long pass from junior quarterback Gunther Johnson to junior wide receiver Michael Dereus that came up just shy of the goal line.

Campbell received the ball to start the second half and was in the midst of a solid drive before Georgetown’s sophomore linebacker Paul Duval delivered a huge hit to redshirt sophomore quarterback Daniel Smith, forcing a fumble that was recovered by Hoya sophomore defensive lineman Kingsley Umemba. Georgetown was unable to take advantage of the turnover, as they were forced into a 3-and-out by the Campbell defense.

The Camels quickly recovered their offensive momentum, gaining one first down before scoring the first, and only, touchdown of the game off of a brilliant 70 yard pass from Smith. This gave Campbell a 10-6 lead. Neither team would score again until Campbell kicked a field goal with 7:06 left in the fourth quarter.

The rest of the game was much of the same for the Georgetown offense, as they either punted or turned the ball over on each of their remaining possessions. In fact, their only points of the second half came off of safety in which the Campbell long snapper snapped the ball out of the back of the endzone. This gave the Hoyas the ball back, down 13-8 with 4:07 on the clock. Georgetown was building a steady offensive drive, but ultimately Johnson was hit hard on a Camel sack, fumbling the ball and sealing the victory for Campbell.

One of the few bright spots for Georgetown was its strong defensive performance led by sophomore linebacker Wesley Bowers who racked up 18 total tackles. The Hoyas (1-1) will look to continue this defensive production and hope to jump start its offense this week against Dartmouth (0-0, Ivy). Follow @GUVoiceSports on twitter for game day updates and breaking news.