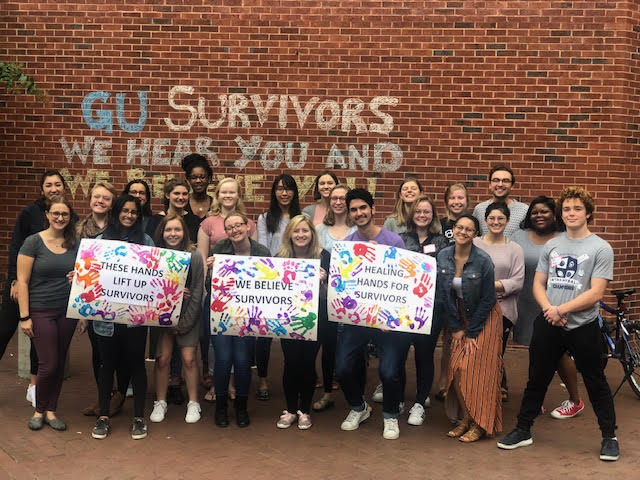 This year, Sexual Assault Peer Educators is celebrating its 10th anniversary of offering workshops, trainings, and speaker events on issues surrounding sexual assault. Undergraduate students have entirely led the program, commonly known as SAPE, through its decade of existence on campus.

According to Jennifer Wiggins, the program’s staff advisor, recent years have been SAPE’s most successful. “Although SAPE has been around for 10 years, I believe it has had its greatest impacts in the last three academic years,” Wiggins wrote in an email to the Voice.

Susu Zhao (COL ’19), a member of SAPE’s student advisory board who has been involved since her freshman year, said Wiggins played an important role in SAPE’s growth. In 2015, Wiggins’ first year with the program, SAPE’s membership rose from 55 to 100 peer educators. With more peer educators, SAPE was able to reach 1,800 students through their programming this past year.

Wiggins emphasized the student-driven nature of the group as one of its greatest strengths. “Having peers educate peers, we remove the barrier of discomfort that students experience in engaging with staff around topics that are difficult to unpack,” she wrote. “Students can relate to each other through shared experiences which allows for greater learning and engagement.”

“My hope was that we could offer a month of programming that would broaden how Georgetown critically addresses issues of sexual assault,” Wiggins wrote.

SAPE also launched its first fellowship program this year. In the program, 30 undergraduate fellows will undergo extensive training in peer education advised by Wiggins and Claire Bernstein, another staff advisor to SAPE. The fellowship aims to offer an in-depth customized approach to training, particularly for students with a background in sexual assault education. Stuer believes this will provide a more thorough education to students than SAPE has offered in the past.

“There’s a different need in our community than what SAPE’s original model was intended to address, and so we want to be able to take that deeper dive and be able to have those more nuanced conversations in order to be providing something that the Georgetown community isn’t already getting,” he said.

In November, SAPE is hosting the District’s first student-led conference centered on sexual violence, the Working to End Rape Culture Summit (WERC). At the event, taking place on Georgetown’s campus, students, administrators, and community members from around the D.C. area will gather for 18 different workshops on topics such as social media activism and the Title IX process. The planning committee is advised by Wiggins and includes leaders from SAPE and other student groups.

Tickets for the summit sold out three months in advance. Stuer said this level of interest reflects the Georgetown community’s desire to address and discuss these topics. He hopes the program will expand to include as many participants as possible.

“What WERC is trying to do is recognize here we are, and we’ve made some progress, but we still have a long way to go. It’s trying to think about how do we take stock of where we are and [how] all of us move it to the next level,” Stuer said.

In conjunction with SAPE’s recent efforts to expand its reach, the program’s leaders hope to continue to prioritize engaging diverse communities on campus. Recently, SAPE held a workshop with this year’s cohort of the Community Scholars Program, which provides support for first-generation college students in their transition to life at Georgetown.

“We need to give a space to those who haven’t had the social capital to take up space in the conversation,” Zhao said. “I feel like we’ve really been putting in a lot of effort to reach those different voices and make sure that everyone has a seat at the table around conversations of sexual assault on campus.”

As SAPE continues to evolve in its 10th year, so does the world that it finds itself in. As accounts of sexual assault make headlines, Stuer believes that SAPE’s work is especially important. “We know that this is impacting survivors in our community, and so one of the things SAPE sees as part of our mission is how do we get people think ing about how they can be supporting survivors even in just their day-to-day life.”