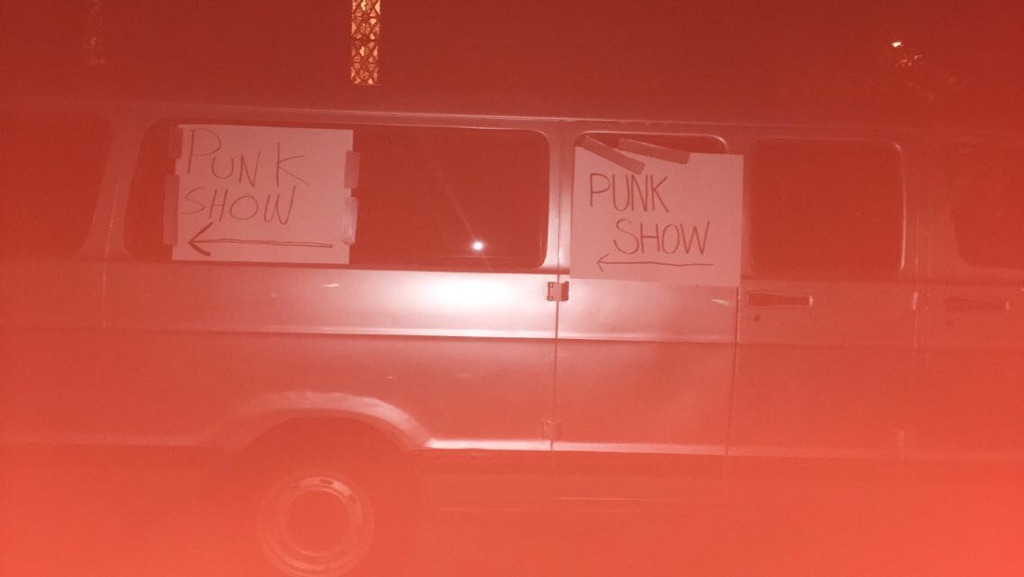 “Punk show?” said the man standing in the opening to the nave of St. Stephen’s church. “Around back,” he continued.

Still confused by the sanctified venue of the hard rock show, a group of emo rockers walk around the corner, following the signs on the church vans and stained glass windows that said “punk show.” Dozens of concert-goers were lined up outside, waiting to get into the church reception room. Bikers with a plethora of tattoos smoking Marlboro Reds stood behind middle-aged women straight out of a Sundance catalog. The people in line seemingly had nothing in common except for the fact that they were all huddled up waiting to get into see Ian MacKaye and his new group perform, and the diverse demographics countered the popular idea that punk is only for troubled teens.

MacKaye is the local owner of Dischord Records, one of the last DIY independent labels, as well as the frontman of several punk and indie groups such as Fugazi, Minor Threat, and the Evens. Sunday marked the first time he and his new band, comprised of MacKaye, his wife, Evens’ bandmate Amy Farina, and Fugazi bassist Joe Lally, played in front of a crowd. The show was supposed to be lowkey and under the radar—until Rolling Stone picked up on it. According to the music magazine, Dischord confirmed that the unnamed group would be a new project. That said, the show was extremely informal and as MacKaye stated at the show, nothing more than another rehearsal, except this time in front of people.

The relaxed, practice-like atmosphere made the show all the more enjoyable for those in the audience. There was no charge, save for donations to the Loaves and Fishes initiative, and the small open floor space left everybody standing, laughing, and conversing throughout the show. MacKaye, Farina, and Lally all spoke directly with the audience in a very personal way, as a great number of people were local friends of the band. The whole experience was so informal that it would have left any outsider unaware of the fact that MacKaye and Lally were in one of the biggest punk bands of the ‘80s and ‘90s.

Then came the music, a mystery to the audience seeing as all of the ten or so songs played were written in the past three years and had never been performed live. MacKaye, for one, has played in a wide range of styles, so fans were unsurprisingly murmuring before the show, questioning what type of music the new group would yield. Would the songs be softer to adhere to a more pious setting, or would MacKaye go full punk? Would it be laid back like the products of the Evens or obtrusive and loud like Fugazi?

Their opening song answered all questions, starting out with a sweet, melodic tune before transforming into a much more hard-core sound. The song was a microcosm, representative of the rest of the show, a combination of soft-spoken poetry and high energy screaming that showed MacKaye’s depth as a singer and songwriter.

Accompanying the softer sounds were the backing vocals of Amy that complemented MacKaye’s own voice beautifully, alongside Lally’s slow bass patterns. When the band would get more punk, MacKaye would step away from the mic and start shredding raw, yet pure sound waves off the walls of the gym. The sound was truly original, and no two measures sounded the same all night.

The guitar, bass, and drums each personified their own distinct character, but at the same time fit together like a puzzle. They combined as a unit for a truly indescribable sound that resembled something of the ideal cross between Fugazi and the Evens—which would make sense since the personnel was half of each. The soft-spoken back and forths between MacKaye and his wife represented the duos group, while MacKaye’s shouting and Lally’s heavy bass brought fans back to the two’s older stuff. The juxtaposition of the two unequivocal sounds resulted in a new band that deviates from past projects, while at the same time holds onto the essential elements of them. The “to be determined” group showed promise in their whole set and proved that the middle-aged musicians are far from done.