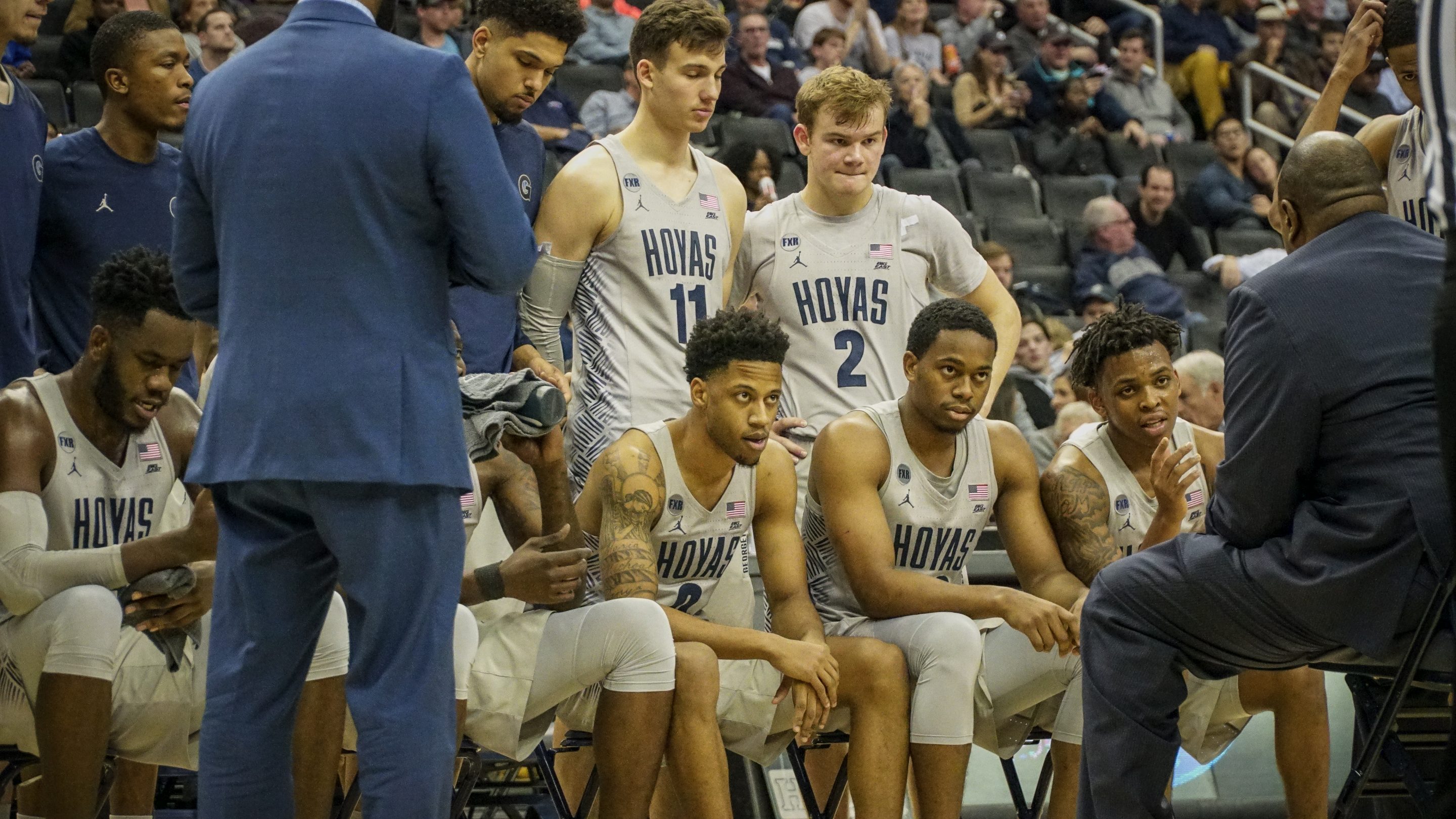 The Georgetown men’s basketball team (7-2, Big East) lost a nail-biter to rival Syracuse (7-2, ACC) for the second straight year on Saturday. As in last season’s matchup at Capital One Arena, the Hoyas led by double digits in the second half at the Carrier Dome, but allowed the Orange back into the game. This time, Syracuse finished it off in regulation, 72-71, on a game-winning pull-up jumper from junior guard Tyus Battle with three seconds remaining.

Georgetown’s freshman guard duo got the Hoyas off on the right foot as James Akinjo found Mac McClung for a 3-pointer on their first possession. McClung missed his first 17 three-point attempts to begin his college career, but that has yet to stop him from looking for his shot early and often. He was especially aggressive on Saturday, going 3-of-11 from three, and notched his fifth straight game with at least one 3-pointer.

The Orange responded with five straight points, but freshman forward Josh LeBlanc tied it up at 5-5 after grabbing a rebound off his own miss and going back up with a layup. From there, Georgetown went on an 8-0 run, capped off by a steal from senior guard Greg Malinowski which led to a McClung fast break layup on the other end. At the 8:36 mark of the first half, head coach Patrick Ewing was forced to call a timeout after Battle missed his second of two free throw attempts, but grabbed his own rebound and put it back up to bring the Orange back within four.

After that point, the Hoyas clamped down and outscored Syracuse 20-11 for the remainder of the first half. Syracuse scored only 22 points in a first half in which they shot 25 percent from the field and 1-of-14 from three. McClung and senior center Jessie Govan combined for 22 of Georgetown’s 35 points as the Hoyas were riding high going into the break.

The second half was an entirely different story as the Orange began to find the gaps in Georgetown’s defense and improved their field goal percentage to 60 percent. After graduate student forward Trey Mourning made a layup to start off the Hoyas’ second half scoring, Syracuse took over. The Orange used a mix of improved half court play and an opportunistic fast break offense to go on a 17-4 run in the opening five minutes of the second half. Battle led the way with 10 points during the run that quickly brought the Orange back into the game.

After a 3-pointer from McClung and a short jumper from Govan, the Hoyas quieted the crowd, but the momentum had clearly shifted in favor of the home team. At 11:11, Syracuse retook the lead on a 3-pointer from junior forward Elijah Hughes. From there, the Orange eventually took a six-point lead, but Malinowski kept the game within reach with three 3-pointers in the span of three minutes, each coming off solid Georgetown ball movement. The Hoyas went back on top with 5:15 to go after sophomore guard Jahvon Blair converted on a 3-pointer.

It remained a close game down the stretch, with neither team holding more than a one-possession advantage. With 2:02 to go, Govan made another short jumper in the paint, where his elite scoring touch was on full display throughout the afternoon. On the next possession, sophomore forward Oshae Brissett found the red-hot Battle for his second 3-pointer of the game and the Orange took a two-point lead. Again, Govan responded, this time with a 3-pointer from the left side off an assist from Blair. With a one-point lead, the Hoyas grabbed the subsequent Syracuse miss and had a chance to run some clock and increase their lead, but junior guard Jagan Mosely was called for an offensive foul after running into sophomore forward Marek Dolezaj. With 11 seconds remaining, Battle dribbled the ball up the court and pulled up at the right elbow to make the shot over Mosely. Blair was just off on a half-court attempt at the buzzer and the game ended in heartbreak for the Hoyas, with Syracuse on top, 72-71.

Battle led all scorers with 26 points, including 21 in the second half. Hughes added 15, including four 3-pointers. For Georgetown, Govan had 22 points and 12 rebounds, while McClung had 18 points. Akinjo struggled throughout the game notching just four points, along with five turnovers.

The Hoyas return home next Saturday for a matchup with Southern Methodist (6-4, AAC. Tip-off is scheduled for 12:00 p.m. ET and the game can be watched on Fox Sports 1 with live stats available at guhoyas.com. For live coverage of the game, as well as coverage of all of Georgetown’s athletic programs, follow @GUVoiceSports on Twitter.