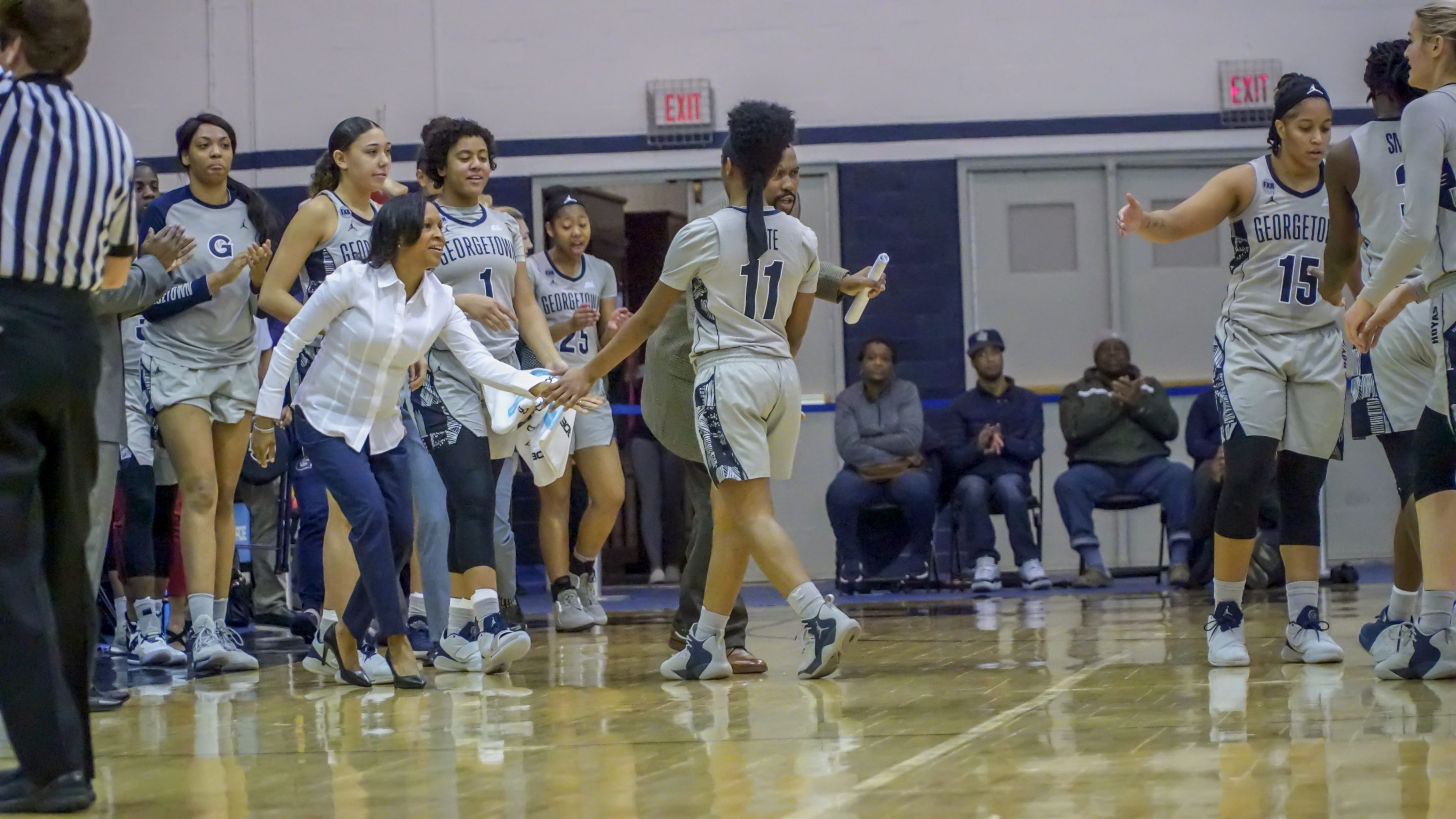 The Georgetown women’s basketball team (7-5, 1-0 Big East) overcame an eight-point halftime deficit to defeat Xavier (9-3, 0-1 Big East), 68-61, Saturday evening at McDonough Arena. In their opening game of Big East play, the Hoyas trailed by as many as 16, but senior guard Dionna White willed the Hoyas to victory with a masterful all-around performance. She led both teams in points, rebounds, assists, and steals.

The Musketeers began the game hot from outside, with two 3-pointers from sophomore forward Deja Ross to take an early 6-2 advantage. White helped keep it close in the first quarter with a fast break layup and assist to senior guard Brianna Jones for a jumper, but Xavier continued to shoot well. Sophomore guard Princess Stewart made a 3-pointer on a fast break and then found freshman guard Lauren Wayslon a minute later for another three to put the Musketeers up ten. Sophomore forward Tatiana Thompson helped stop the bleeding with a 3-pointer off another White assist, but Xavier would hit again from outside just before the first quarter buzzer. Head coach James Howard was not happy with his team’s slow start.

“I kind of saw finals and Christmas break in us where we looked slow out there tonight,” Howard said. “I hope we can get that off of us and come back and play well.”

In the second quarter, the Musketeers continued to fire away and threatened to put the game out of reach. Midway through the period, redshirt junior forward Tierra Floyd hit a deep 3-pointer in transition, and after graduate student guard Dorothy Adomako pulled Georgetown back with five straight points, Floyd again hit from well outside the arc to put her team up 14. Howard was quick to point out his team’s struggles to defend the 3-point line in the first half.

“We gave up a lot of threes,” Howard said. “They had seven threes at the half and that was one of the things we had in the scouting report that they like to shoot the three and that we had to cover out. And I didn’t think we got out and it hurt us a little bit.”

Just before the break, however, junior forward Anita Kelava grabbed her fifth offensive rebound of the half and made two free throws after being fouled to cut the lead to ten. On the next possession, White drew a charge and then finished a layup at the other end to give the Hoyas some momentum going into the second half.

The Hoyas began the second half looking strong and brought the margin to just two points after a jumper from Jones less than three minutes into the third quarter. It looked like the Musketeers might secure their lead as they went back up six, but scores from graduate student guard Mikayla Venson and White tied the game at 47. The momentum had swung and the Hoyas were quick to take and build the lead. With 30 seconds to go in the third, White pickpocketed the Xavier ball handler for a second straight possession and finished with a layup at other end to put her team up seven going into the fourth. After the game, Howard spoke about White’s versatility.

“She’s a triple threat type of player,” Howard said. “She does it all for us. She can defend, she rebounds the ball, and she also scores… She is the engine that starts the team.”

On the opening play of the fourth, White found Adomako inside for a layup to put the Hoyas up 56-47. The teams went back-and-forth throughout the final period until Ross hit her third 3-pointer of the game to bring the Musketeers within three with 3:26 remaining. They would not get any closer though, as the Hoyas clamped down and made their free throws down the stretch to finish the game on top by seven.

Howard was pleased to see his team begin conference play with a solid victory.

“It sets the right tone because the Big East is very tough this year,” he said. “Any win is going to be a good win right now. We’ve just got to take care of home court and then we’ve got to try to get better each and every day out.”

It will be a quick turnaround for the Hoyas who face Butler (10-1, Big East) on Monday at McDonough Arena. The game will be broadcast on the Big East Digital Network with live stats available at guhoyas.com. Follow @GUVoiceSports on Twitter for more updates and coverage of all winter sports at Georgetown. 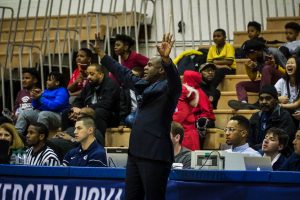 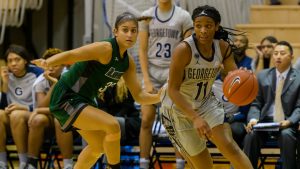