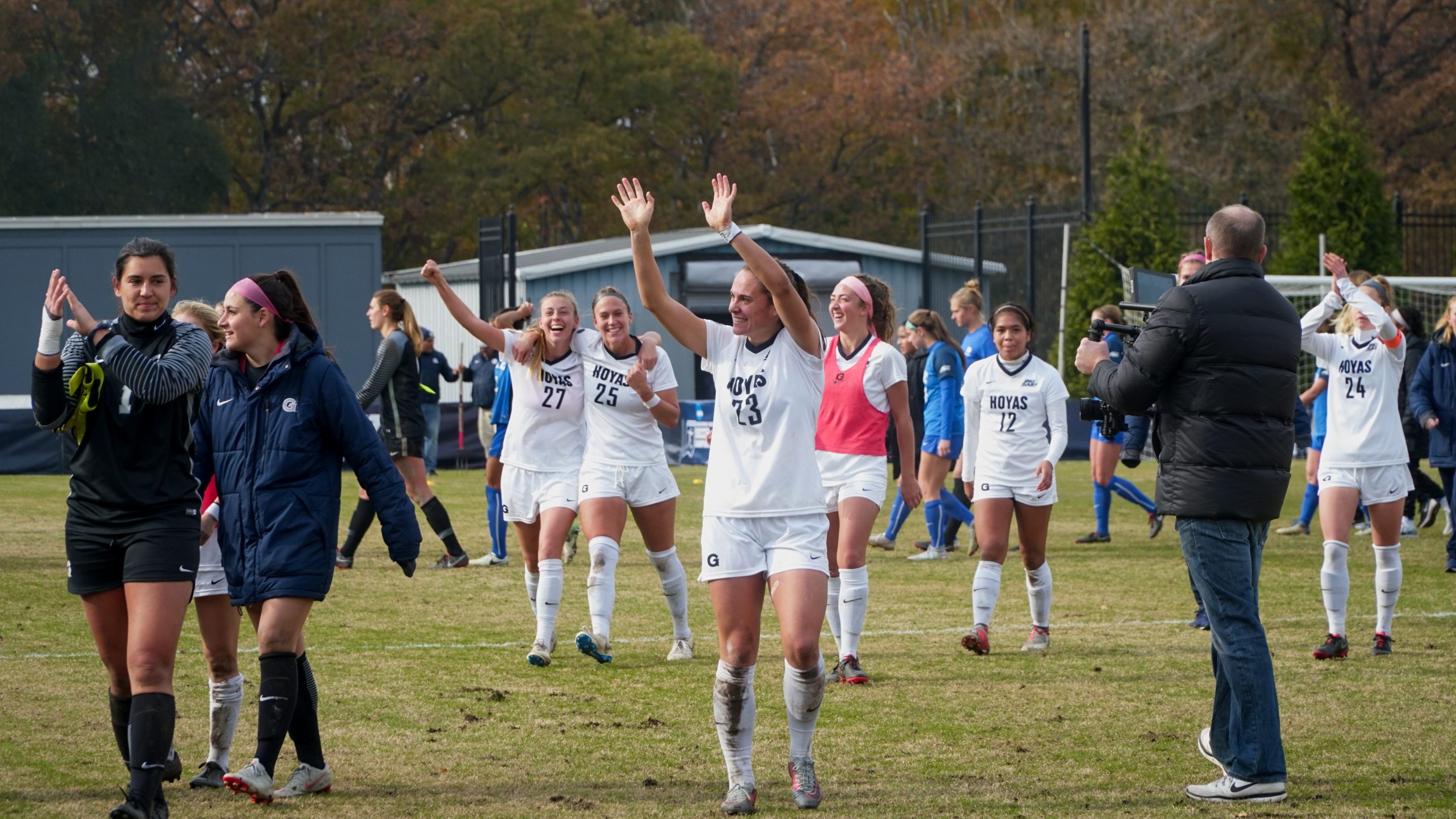 The Georgetown women’s soccer season lasted for exactly four months. Head coach Dave Nolan’s side reported to the Maryland SoccerPlex on August 1 to begin training. But even before the season opener against Georgia, the plaudits came in thick and fast for the Hoyas. The Hoyas were ranked No. 22 in the preseason coaches poll, and all nine rival Big East coaches picked Georgetown to finish first in the conference once again. Senior goalkeeper Arielle Schechtman and junior defender Meaghan Nally earned preseason honors, and senior forward Caitlin Farrell made the MAC Hermann Trophy watchlist. While the nation was looking at past success, it quickly became apparent in camp that this would be a special year.

Ten of Georgetown’s starters on opening day had been with the team the year before. Yet it was graduate student forward Kyra Carusa, fresh off of a national championship with Stanford, in her first game with the program, who scored the opening day winner. When all was said and done, Carusa was the only Hoya with double-digits in both goals and assists, and she ended up being drafted by Sky Blue FC of the NWSL this past Thursday. Her contribution to the team, however, was much more than what shows on the stat sheet.

“She kind of brought this fire to our team where she was always just riled up and ready to go. You could tell from some of her post-goal celebrations,” Farrell said. “She just brought that drive and determination to our team to always push ourselves to be better and do everything we can to keep moving forward.”

But it didn’t all click right away for Georgetown. The backline was solid, but after Farrell scored against Virginia Tech in their second game, the Hoyas went over two full games without a goal. Then, after six minutes, Georgetown was 1-0 down against Yale.

“I actually do remember that game a lot because I think it kind of showed our whole season. I think one of the best parts of our team this past year was we never got fazed,” Farrell said. “If we go a goal down that’s okay because we know we’re gonna come back, we’re gonna tie it, and then we’re gonna get the go-ahead goal. And I really think that that was just a great team to be a part of because we were so confident in ourselves and knew what we could do.” 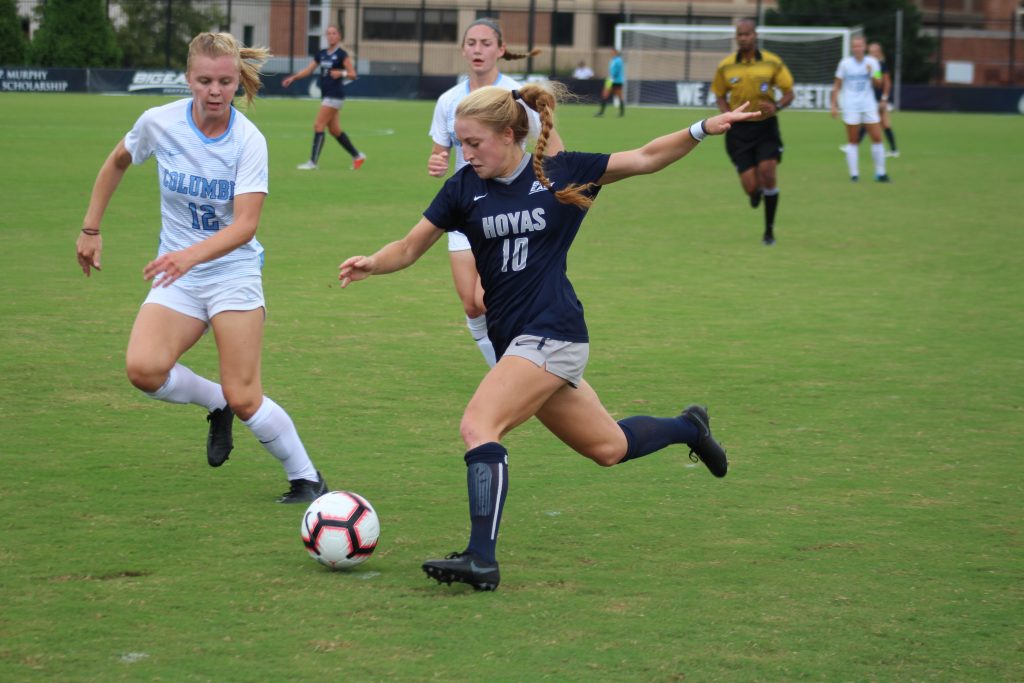 The Hoyas scored three unanswered to win the game and that momentum propelled them to four straight wins on the road. The first came against George Washington before a trip to Morgantown to face perennial powerhouse West Virginia. Nally and Carusa assured a 2-0 win, and the Hoyas cracked the national top ten, where they would stay for the rest of the year, just after Labor Day Weekend.

The next weekend’s heavy rain made Shaw Field unplayable, so the Hoyas’ home game against George Mason was moved to Fairfax, Virginia. Games would be moved away from Shaw Field twice more during the season, much to the team’s disappointment.

“We just kinda knew that nothing was guaranteed, and if anything it fueled our fire even more because we love Shaw. It’s like the Holy Land,” Nally said. “We wanted as many games on it as we could, so the more games that we lost, we knew we had to win more so that we could play on it longer.”

The Hoyas ground out an overtime win at Princeton, then, in their return home after three weeks away, they exploded for four goals against Columbia. Junior forward/midfielder Paula Germino-Watnick provided a goal and three assists over those two matches, and finally, Georgetown’s formidable front three, which combined for 36 goals and 21 assists, was firing on all cylinders.

The Hoyas cruised through the start of Big East play, opening with three straight 3-0 wins and a 7-1 thrashing of Creighton, which featured a hat trick from Farrell. By then, Georgetown reached the top five in the coaches poll, and the whole conference was looking to take them down. Farrell scored dramatic game winners in the next three matches, beating Villanova, Providence, and Marquette, and took her scoring streak to ten games. 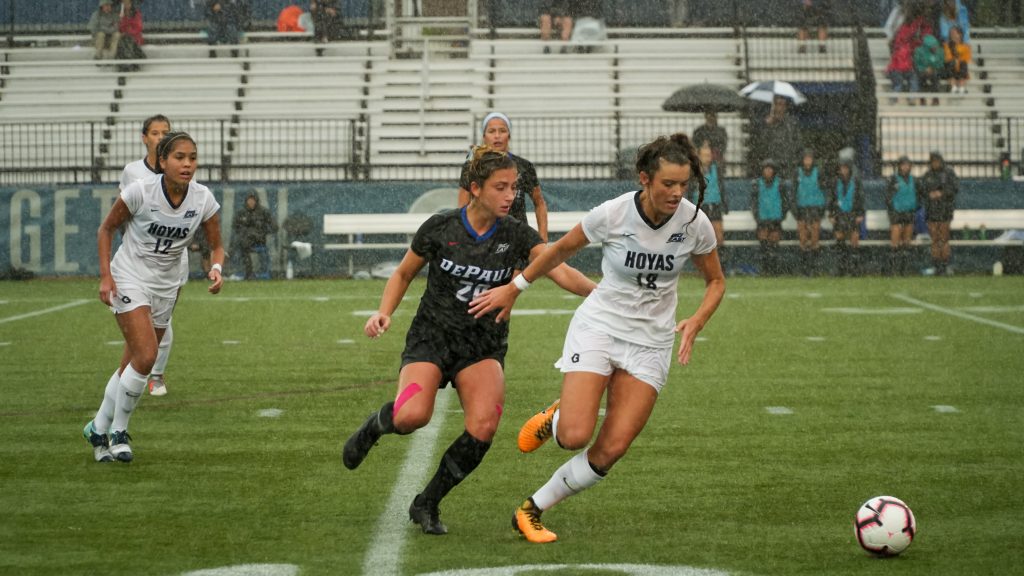 “The shots that she’s scoring are so difficult. The one she scored at Marquette, there’s no way that goal should go in, but she’s just so good,” Nally said. “Everything turned to gold. Everything was turning to a goal.”

Farrell’s streak would end against Butler on October 21, but the 2-0 win sealed a second-straight Big East regular season title and gave Georgetown a chance to run the table in conference play. Xavier had other ideas, though, and while Farrell, Nally, and Schechtman picked up Big East Player of the Year honors at their respective positions, Georgetown finished the regular season at a disappointing 8-0-1 after a 0-0 draw in Cincinnati. The Hoyas got some revenge over the Musketeers in the Big East semifinals, and Farrell found some personal vindication as well.

Farrell nodded home a cross from senior forward Amanda Carolan to make it 2-0, and of her 30 collegiate goals, it was the only one with her head.

“I was just really mad because I scored a header goal against Virginia Tech and they didn’t count it even though I wasn’t offside, and Dave always says that my head does nothing, so I really needed to prove that it’s there for a reason,” Farrell said. “I had so many defensive headers this year, but I just wanted a header goal before I leave Georgetown to stick it to Dave.”

Farrell scored again, with her foot this time, to beat Butler in the final and three-peat as Big East champions, one of the team’s goals set in the preseason, and one that was reinforced by Nolan. 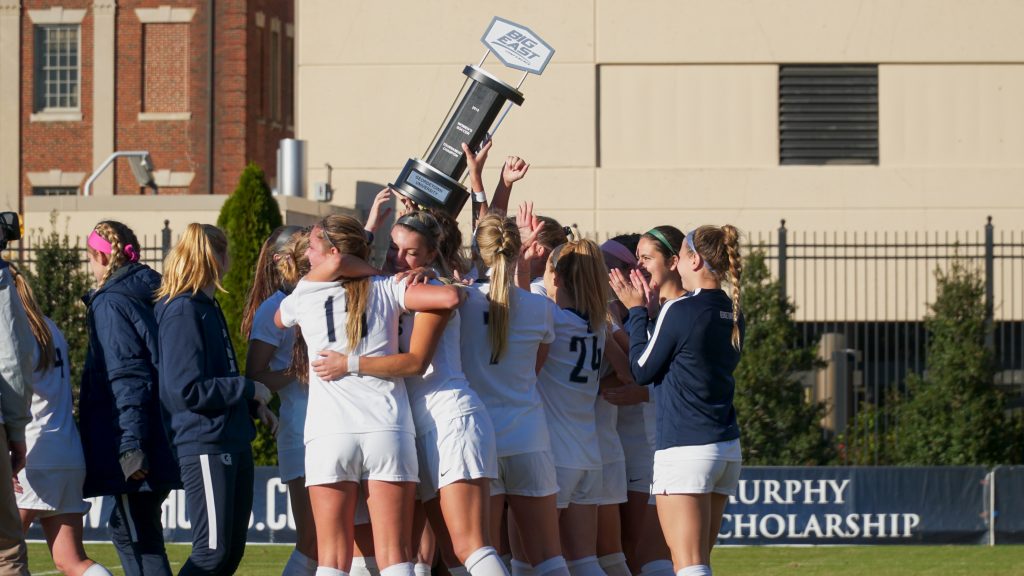 “Ever since the end of last season, our biggest goal and what we kinda focused all our attention on was three-peating,” Farrell said. “Dave put threes on all of our lockers, so that really was the goal and I think, at least for me I was pretty much just focusing on that. I really wanted to win a Big East Championship my senior year for the third year in a row.”

An undefeated 17-0-3 record was enough for the program to earn its first ever NCAA Tournament 1-seed, which came as a surprise to Nolan and the rest of the team, especially because the selection committee sent the Hoyas on the road in the first round of the 2017 tournament. They would face 16-win Central Connecticut, and after senior forward Danielle Pearse grabbed a shock goal in the 20th minute, No. 2 Georgetown was staring down elimination.

“I think there was more panic that we’d seen simply because it was an elimination game and we knew the wind was really strong, so anything could happen, but personally, I never thought we were going to lose,” Nally said.

It would take 50 minutes, but Germino-Watnick finally grabbed the equalizer in the 70th minute, settling the crowd’s nerves, and Georgetown eventually came away with a 3-1 win. The next round was moved to George Washington, again because of conditions on Shaw, and the Hoyas outworked a physically imposing Washington State team to advance to the Sweet 16.

A second half blitz eliminated No. 9 Duke, inspired by Germino-Watnick’s quick feet and powerful shot. The Duke game also saw Farrell tie Daphne Corboz’s single season goal-scoring record with 18, more than doubling her career total on the Hilltop, not that she was paying any attention.

“I didn’t even really know it was a thing, and then, I forget who told me, but someone told me what it was and said that it was 18, and I kind of thought, ‘Oh, this would be kind of cool because its 2018 and I’m number 18. Kind seems like fate right here,’” Farrell said. “But as much as I wanted to do that, I was just wanting to have our team go as far as possible, and however I was able to help with that that would be great.”

No. 11 Baylor was hardly a speed bump, and after a muddy 3-0 win, the Hoyas cruised into the College Cup.

“Thursday’s (the day before the semifinal) nice because you kind of get to enjoy all that and be like a little celebrity, or whatever you want to call it, and I think that is really just a great experience to be recognized because I feel like women’s soccer doesn’t always get that much recognition,” Farrell said. “Playing in that environment is just amazing, and to have the stands full and all those people cheering, whether or not it’s for you and whether or not they’re wearing Carolina blue, it’s still just an incredible environment and to get there after the season we had was just a great way to end it all.”

After a bright start, No. 3 North Carolina took control of the national semifinal and put the Hoyas under considerable pressure. In the 83rd minute, Schechtman went down with a torn ACL, and in stepped junior goalkeeper Lauren Gallagher, who promptly saved a penalty two minutes after coming on and forced overtime. 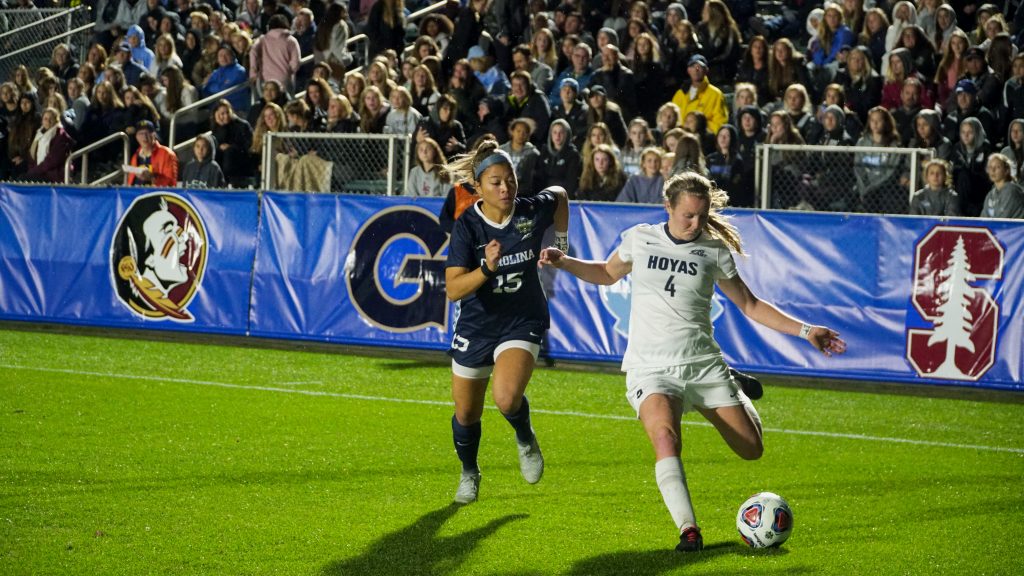 “There was no doubt in my mind that Lauren was going to stop everything that came her way,” Nally said. “I knew she was going to save [the penalty]. It was this crazy feeling.”

UNC found a winner deep into the second overtime, and Georgetown’s season ended two games short of a national title. Nolan and the rest of his staff were named Coaching Staff of the Year. 21 wins set a program record, and Schechtman, Nally, and Farrell each earned All-American accolades. The Hoyas boasted a Hermann Trophy semifinalist in Schechtman, and a finalist in Farrell. The juniors and seniors on the team have now made it to two College Cups in their Georgetown careers.

“I think it did really start with the seniors from last year in the class of 2018 because they really set the standard,” Farrell said. “We were just trying to keep the success of the program going, get that three-peat, win regular season again, and then make another long NCAA Tournament run.”

Like last year, the Hoyas will graduate key pieces, but Nally is confident in the players who are waiting in the wings.

They have some time to relax and recover before the next step in their soccer careers, whether it’s spring practice to prepare for the next fall or moving on to the professional ranks. But after a dominant Final Four run, the team has no plans of backing down for next season.

“The next step is to take a little break right now, kind of regroup because it’s been a long season and we need a little bit of rest, but come back in the spring firing all cylinders,” Nally said. “We want that fourth tournament title, we want that third regular season title, we want to win the National Championship.”

This Week in Soccer: September 7-September 14 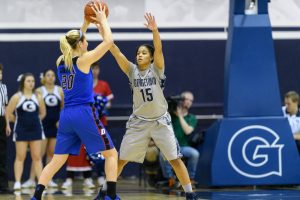