The No. 25 Georgetown women’s lacrosse team (8-6, 2-1 Big East) will face the No. 2 Maryland Terrapins (15-0, 6-0 Big Ten) under the lights at Cooper Field on Wednesday night. Georgetown is coming off of a crucial conference win at Villanova (8-6, 2-1 Big East) on Saturday, and they will look to build upon it to make a case for the NCAA Tournament.

After two consecutive losses on home turf against Navy (11-3, 5-1 Patriot League) and Denver (11-2, 3-0 Big East), the Hoyas left Villanova Stadium with a  12-8 win. Senior attacker Morgan Ryan scored a team-high five goals and was supplemented by junior attacker Emily Ehle who added one goal and three assists. Eight different players scored for Georgetown on the day, showcasing a great overall team performance that will boost their confidence for the upcoming battle against the Terrapins. In addition, senior goalkeeper Haelle Chomo made seven saves on Saturday, and her contributions on Wednesday will be key for Georgetown’s winning chances. The Hoyas’ leading season scorers, senior midfielder Francesca Whitehurst and senior attacker Taylor Gebhardt, will also need to excel on Wednesday in order to take down a strong Maryland team.

The Terrapins defeated No. 5 Northwestern (9-4, 3-1 Big Ten) last Thursday by a score of 17-13. The Wildcats started the game with their foot on the gas, powering to a 6-3 lead in the first half. However, the Terrapins ended Northwestern’s dominance with a 4-1 run to end the period and tie the game at 7-7 by halftime. Graduate student midfielder Erica Evans and sophomore midfielder Grace Griffin both racked up two goals in the first to keep Maryland in the game. The second half was a different story, with Maryland outscoring the Wildcats 10-6 to secure the win and maintain their elite spot in the rankings. Senior attacker Caroline Steele put up four goals in the second half, making it five for her on the night, and Evans added another two to end the game with four goals. The Terrapins’ leader scorer, senior midfielder Jen Giles, who has 42 goals and 17 assists on the season, had a quiet game but the Hoyas should watch out for her scoring capacity, as Giles and junior attacker Kali Hartshorn (34 goals and 12 assists) make for a very dangerous duo.

The Hoyas’ chances of winning hinge on their ability to take control of the draws and finish their plays. In addition, in order to limit Maryland’s scoring, Georgetown must keep Maryland off the counter, where they are most effective, and ensure that the Terrapins do not get many free-position shots to keep their scoring limited.

Georgetown will look to make a case for the NCAA tournament with a win against Maryland in their final non-conference game. The opening draw is scheduled for 7:00 p.m. ET on Cooper Field. Live stats will be available at guhoyas.com. Follow @GUVoiceSports on Twitter for live updates and breaking news. 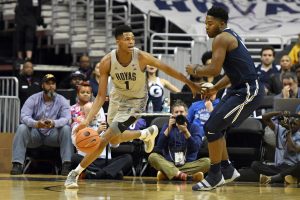