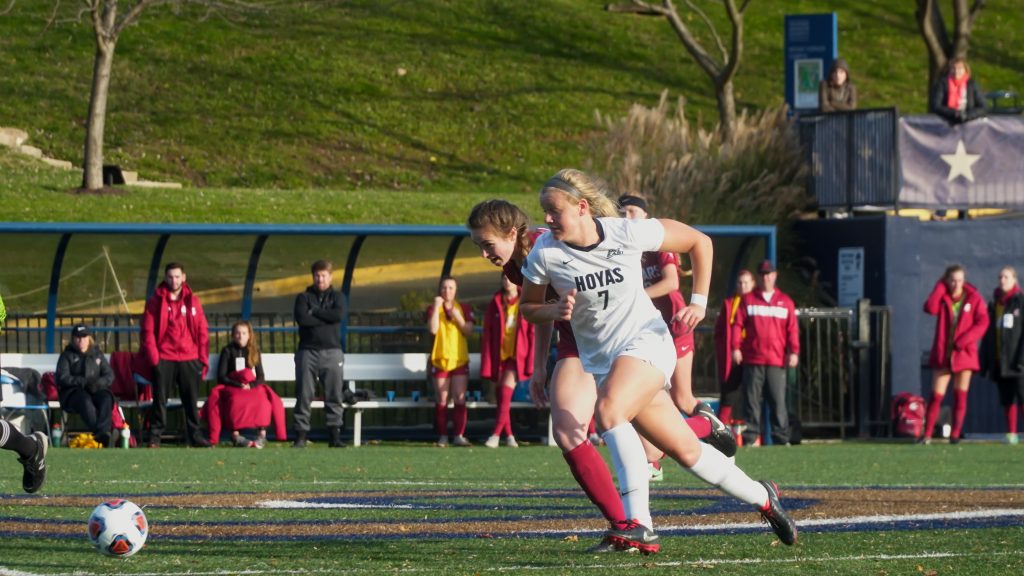 Georgetown started in a 3-5-2 and was dominant in the first 15 minutes. Their first chance came in the 4th minute, when senior forward Paula Germino-Watnick picked up the ball with space on the left wing, broke down the defender with a stepover and Cruyff turn, and played an inviting ball across the six-yard box, but no one was there to connect. The Hoyas got another chance off a corner in the 8th minute when the ball almost fell to Carolan’s head in front of goal, but JMU was able to clear.

As the game went on, JMU began to play confidently and gain more possession. The Dukes created their most dangerous chances off of long throw-ins from sophomore midfielder Hannah Coulling. In the 16th minute, Coulling’s throw-in was cleared out for JMU’s first corner of the game. The ensuing corner reached a wide-open JMU defender on the back post, but the defender was unable to put any power behind her header and it was easily saved by Georgetown’s freshman goalkeeper Anna Leat. Rabot also looked dangerous, as she ripped a 30-yard shot that flew just over the crossbar in the 22nd minute.

After these JMU chances, Georgetown regained control of the game. Senior midfielder Carson Nizialek had a pair of long shots from outside the box but was unable to convert. Then, in the 35th minute, the ball fell perfectly to Leas at the top of the box. Leas took the shot first time, finessing it into the bottom right corner to make it 1-0, Georgetown.

The Blue and Gray started the second half in similar fashion. In the 54th minute, Germino-Watnick played a slow but inviting cross to Carolan who held off her defender, chipped it to herself past the keeper, and then calmly tapped it into the net to make it 2-0. Georgetown thought they had made it 3-0 after sophomore forward Boo Jackson played a beautiful through ball to Germino-Watnick who then chipped it over the keeper, but the referees called it offsides.

Then, in the 75th minute, JMU’s Rabot whipped a freekick into the box, which slipped straight through Leat’s hands into the back of the net to make it 2-1. This gave the Dukes some life, and they began hitting every ball they could into the box. A corner in the 82nd minute fell to a wide-open Coulling, who headed it over the bar. Three minutes later, Coulling’s long throw-in fell to a JMU player on the six-yard box, but sophomore defender Jenna Royson was able to do just enough to put the player off, and Leat grabbed the ball out of the air. Coulling had another uncontested header off a corner in the 89th, but again, she was unable to convert. From there, the Hoyas ran out the rest of the clock with time management tactics and were able to hold off JMU to secure the 2-1 victory.

Overall, Georgetown should be pleased with how they shut down JMU’s senior forward Haley Crawford, who, had nine goals last season but did not have a single shot all game. However, they may be disappointed with their marking on set pieces and throw-ins that provided ample opportunities on which JMU could have equalized.

The Hoyas will play their first home game against No. 21 NC State (0-1, ACC) on Sunday. The Wolfpack dropped their season opener 2-1 at No. 15 South Carolina on Thursday. Kickoff is at 1:00 p.m. ET at Shaw Field. Live stats and a stream are available at guhoyas.com. Follow @GUVoiceSports on Twitter for updates and game recaps throughout the women’s soccer season, as well as coverage of the rest of the school sports throughout the year.

jkp53 John Picker is the Voice's Photo Editor. He is a Bay Area native who loves all sports, but especially soccer a.k.a fútbol. He currently is a sophomore in the McDonough School of Business.