In the past week, various student groups have responded to the invocation of U.S. Immigration and Customs Enforcement (ICE) in a comment written by Jackson Wagner (COL ’21) in the “Republican Hoyas Group” GroupMe. On Sept. 19, Wagner wrote “Can we call ICE on them?,” referring to student protesters at a Georgetown University College Republicans (GUCR) event. Student groups have denounced his comment as an anti-immigrant threat.

On Sept. 19, GUCR held a Climate Forum Rebuttal, a response to the Climate Forum hosted by the Institute of Politics and Public Service. GUCR’s event featured some climate skeptics, which prompted environmental activists on campus to protest, using music, chants, and posters to disrupt their discussion. Eventually, growing hostility led GUPD to issue warnings to the protesters, stating that they could be infringing on the Student Code of Conduct if they persisted.

Wagner did not attend the GUCR event. And notably, at least one undocumented student was involved with the planning of the protest.

The GroupMe where Wagner made the comment is not affiliated with GUCR.

GUCR did not respond to a request for comment.

After seeing a photo of Wagner’s initial comment and the reaction it received in the group, Alexandra Mucher (COL ’22) was compelled to publicize it. “My hands were shaking, I just couldn’t believe that someone would make that comment. And then it was even more disturbing to see that no one else in the GroupMe responded to it and that actually nine people had liked it, but then later on they unliked it,” she said. “I wanted the whole Georgetown community to be aware of it.”

Mucher tweeted a photo of the message on Sept. 20, and noted that she had filed a formal Bias Report about the incident. Mucher felt Wagner’s comment met all the qualifications needed for the report. “It’s clearly racist, xenophobic, by nature,” she said. “On top of that, it was a threat.”

@Georgetown @thehoya @CNN @MSNBC @GtownVoice Hello all, a racist comment was made in the republican group chat that you should be aware of. This was a reaction to a counter protest we held to the climate change denial event hosted by @GeorgetownCR

Wagner addressed the situation in a Sept. 22 Facebook post, where he published a lengthy “clarification, not apology,” for his initial comment. According to this post, he believes his comment was made “in poor taste,” but he alleged that it was “taken out of context.” Wagner claimed that the demonstration “appeared to severely lack diversity/POC protestors,” adding that, “my comment was poking fun at this aspect of their expression.” He insisted that he did not intend on actually calling ICE on “a bunch of random people I don’t know.”

Hoyas for Immigrant Rights (HFIR) published a written response on Sept. 20, in which it refers to ICE as “a terrorist group that has caused and continues to harm and separate thousands of families across the United States.” The letter, which has been signed by over 300 alumni, students, and faculty members, highlights the concern around normalizing comments like Wagner’s.

“Regardless of people’s experiences, ICE is an organization that is not taken lightly in our community and should not be used as a joke,” the statement read. “Therefore, a comment such as calling ICE is a tremendous threat to our affected students and Georgetown University is one of the few places affected students can consider safe.”

The statement called on the university to hold Wagner “accountable for his words.”

“My legal counsel has advised me not to make further statements at this time. We are exploring all possible routes,” Wagner wrote in an email to the Voice. Such routes include pursuing a civil suit against HFIR.

University officials Rev. Mark Bosco, vice president for mission and ministry, Rosemary Kilkenny, vice president for diversity, equity, and inclusion and chief diversity officer, and Todd Olson, vice president for student affairs, sent an email to the student body addressing the situation on Sept. 23. This email encouraged students to read the Speech and Expression Policy, to utilize any campus counseling services, and to provide access to the Bias Related Incident Reporting form. The message also affirmed the university’s commitment to undocumented students on campus. “We welcome students regardless of immigration status, and we stand in solidarity with our undocumented students,” the email read.

The email also touched on the greater ideological context of Wagner’s comments. “Georgetown is rooted in the idea of cura personalis, care of the whole person. As such, the university is committed to creating and sustaining an educational environment that fosters the values and virtues of mutual respect, trust, honesty, safety, compassion and accountability,” it read.

But the email faced backlash from students who felt that it did not offer a strong enough condemnation of hate speech. Flyers including the screenshotted message appeared in Red Square on Sept. 22, reading “Is this what you mean by Jesuit Values?” 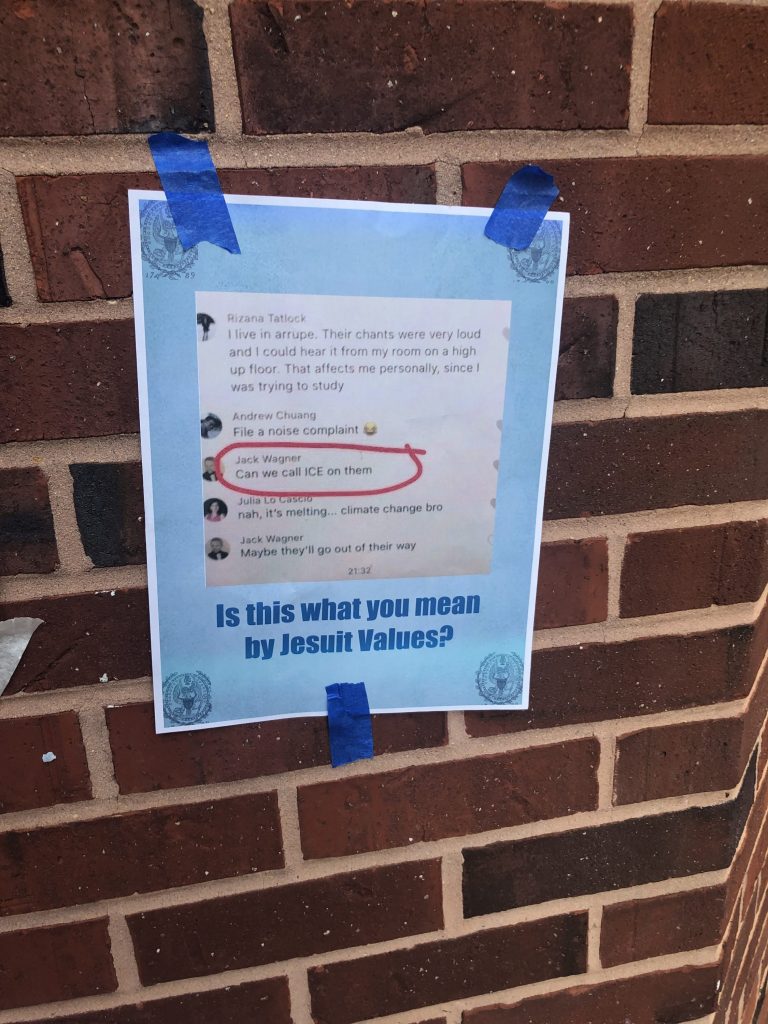 “We are angry for our immigrant brothers and sisters who no longer feel safe on The Hilltop,” the statement read. “Now we turn to Georgetown and ask, how can you claim to “[Affirm] Civility and Discourse” when this individual is threatening an organization that benefits undocumented students with legal action? Norman and Aleida are now asking, where is HFIR’s affirmation? Where is our email condemning this idea of a civil suit?”

Many individuals and community groups joined the solidarity commitment, including Hermanas, the Georgetown University Asian American Student Association, H*yas for Choice, HFIR, and The Black House, among others.

In reporting this through formal avenues, Mucher believes the university will be forced to act. “I knew that that was one way that you could put pressure on the administration to do something.”

In last week’s meeting, the GUSA Senate condemned anti-immigrant hate speech in a bill proposed by Sens. Daniella Sanchez (COL ’22), Miguel Zamudio (COL ’20), and Leo Teixeira (COL ’21). The bill passed with two votes in opposition by Sens. Sam Dubke (SFS ’21) and Peter Lee Hamilton (COL ’20), who voted by proxy. Dubke defended his vote by saying he does not support singling out individual students in this capacity.

Teixeira stressed that the comment, for many students, evokes significant emotions. “To so many students on campus, and thousands across the country, ICE is not a ‘joke,’ it is a very real, very terrifying, and very traumatizing prospect,” Teixeira wrote in an email to the Voice. “GUSA’s first priority has always been and will always be to advocate for the student body, and I believe that renouncing these hateful comments and standing in solidarity with all undocumented Hoyas, and any students affected by issues surrounding ICE and immigration, is a way of accomplishing that important advocacy work.”

Sanchez expressed similar contempt for the comments, stressing the irrelevance of the comment to the climate protest. “The unwarranted comment was obviously brought up out of spite because the conversation had nothing to do with immigration as they were speaking about a CLIMATE protest,” Sanchez wrote in an email to the Voice.

Francis Jr. and Olvera addressed the situation with University President John DeGioia during a regularly scheduled meeting on Sept. 27. While the Francis-Olvera administration say they value free speech, they also stressed the importance of a supportive campus.

After their conversation, Olvera perceived the dialogue as impactful, noting DeGioia’s receptiveness to their concerns. “I know DeGioia has done so much during these last three or four years to create a safe space for undocumented students on campus,” Olvera said. “I could tell that it really affected him and he was like, ‘I’m going to look into this, and I’ll let you know this will never happen again. We don’t want these students to feel unsafe on our campus, especially when we’ve done so much for them to feel safe and included here.’”

Unlike Olvera, Mucher doubts that the administration will address the situation in a way she deems necessary, indicative of what she sees as a pattern from the university. “I don’t have that much faith in the administration. Historically, they have failed countless times to protect marginalized communities on campus, whether it’s women, whether it’s queer students,” she said. “As to what should be done, I think that you’d have to see what happens with the bias report and what they determine.” 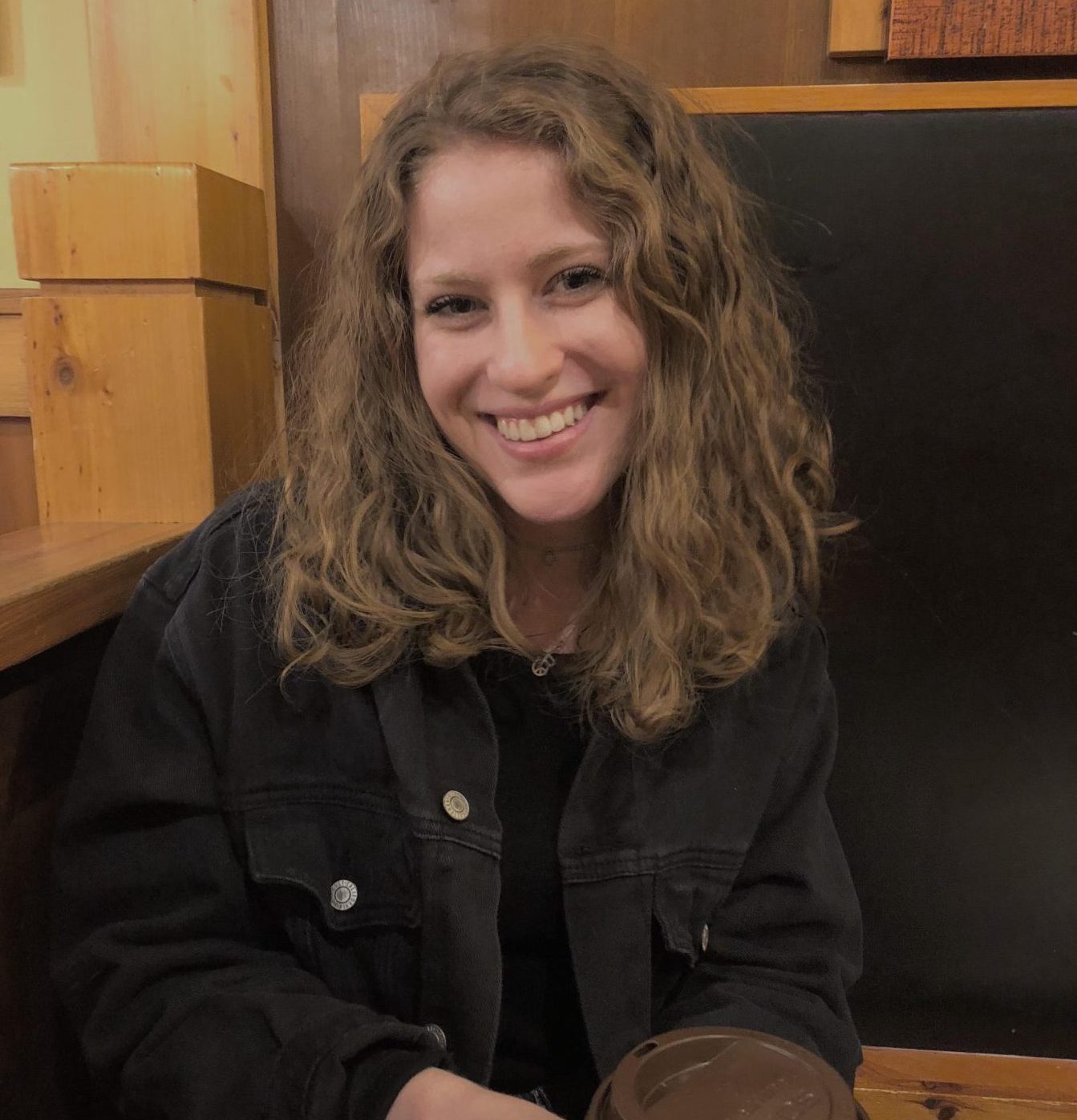