No. 13 Men’s Soccer Takes Care of Business Against Xavier 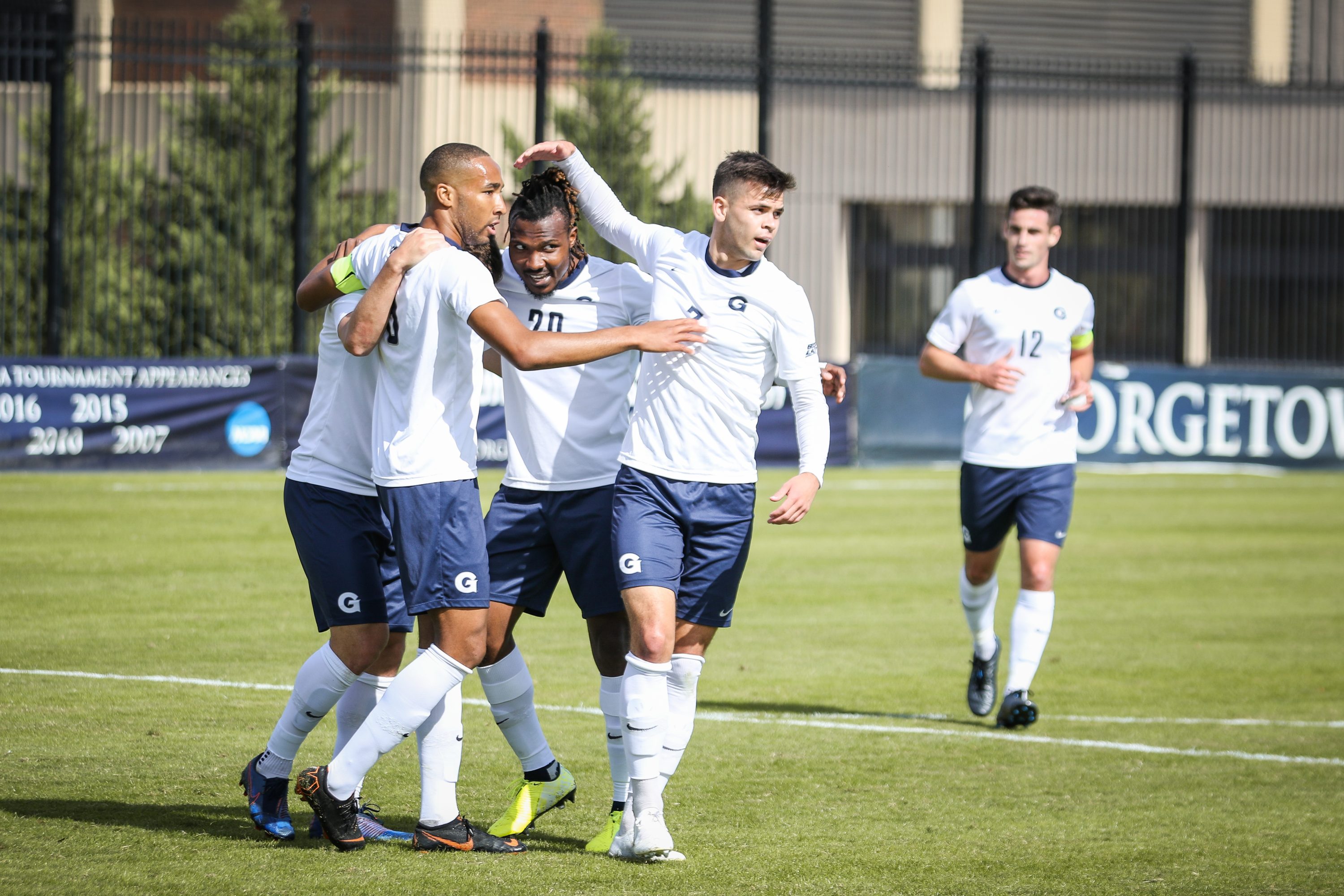 “It’s really good that we’re creating a lot of chances, but I think we just have to try to score more goals,” senior forward Achara said after appearing in his fifth straight games since returning from injury. “We’re winning, but we’re not achieving 4-0, 5-0. We’ll take 1-0 today. I think the boys did well. As long as we’re creating chances, the goals are going to come.”

Achara energized the team’s offense from the outset, as he has his entire Hoya career, and gave the Hoyas their first opportunity when he whipped in a low pass across the front of the goal. No Georgetown player could get a foot to it, but a minute later, the ball came back to him on a cross into the box. He controlled it with his chest and fired a half-volley, but it went just to the left of the Xavier net.

“He’s instant offense,” head coach Brian Wiese said of Achara. “He generates a lot for himself and for other people. It’s a different dimension that other teams have to manage. It just gives a little more teeth to push teams back.” 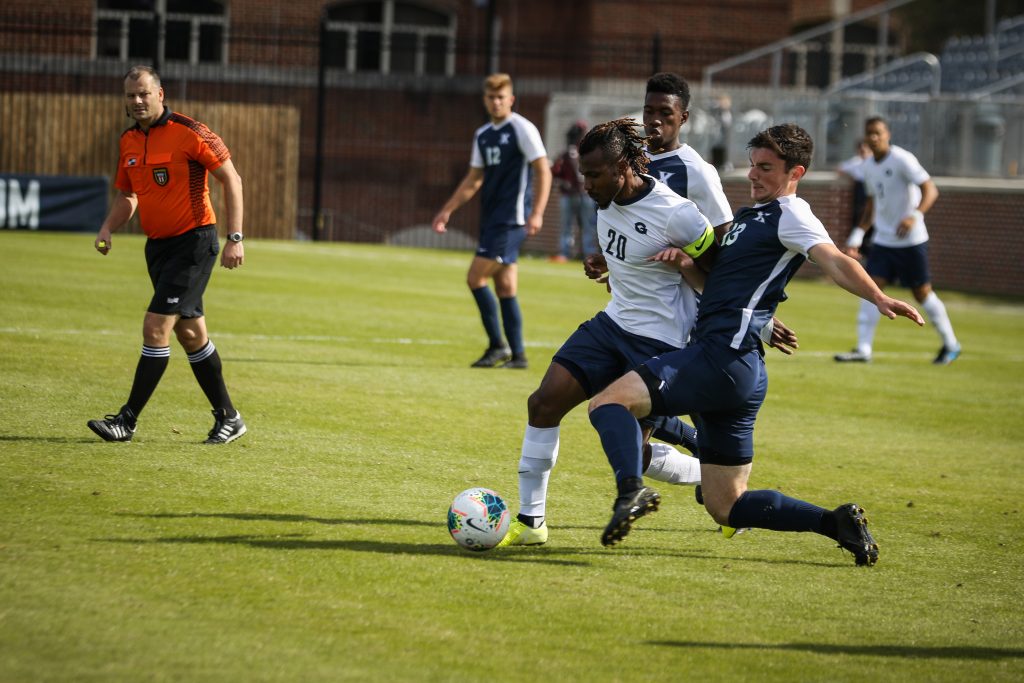 In the 13th minute, Achara had yet another early opportunity after a brilliant one-two pass with Montes freed him up for a left-footed attempt, but the low shot curled out of bounds past the right post. A minute later, Georgetown’s relentless attack got them a reward. After a brief scramble in the Xavier box, the ball eventually came to senior midfielder JB Fischer, whose solid effort was acrobatically saved by redshirt junior goalkeeper Matthew Rosenberg. Unfortunately for Rosenberg, the rebound landed perfectly for Montes, who fired it into the empty net.

“Honestly, it was pure luck,” Montes said of his sixth goal of the season, which leads the team. “I was just in the right spot at the right time. [JB Fischer] had a really good hit, the goalie made a nice save, and I was there.”

After the goal, the Hoyas kept the pressure on with several more chances before the halftime whistle. In the 30th minute, a pair of substitutes nearly combined to double the lead as freshman forward Will Sands sent a perfect cross towards sophomore midfielder Zach Riviere in the box. Riviere’s headed effort was strong, but was just off target. It was not until the 38th minute that the Musketeers truly had a threatening opportunity. Deep in Georgetown territory, a Xavier throw-in found 6-foot-2 redshirt senior forward Samson Sergi in the box. The Hoya defenders failed to get to it first, but Sergi’s headed attempt zipped just past the top-right corner. 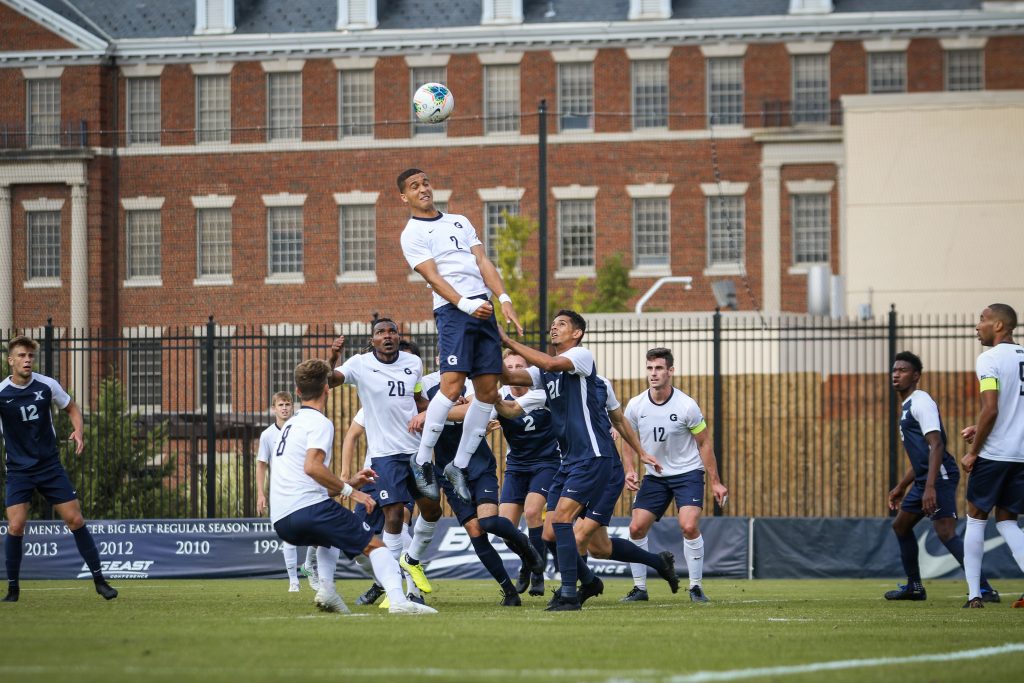 Coming out of the break, Xavier looked more threatening early, and had their closest chance of the game in the 57th minute. Senior midfielder Derrick Otim got past the Georgetown defense and sprinted onto a ball in the box. He fired away with plenty of space, but sophomore goalkeeper Giannis Nikopolidis stood strong to make the save, and a rebound attempt from redshirt senior defender Jacob Goodall sailed over the net. After the match, Wiese pointed to the play between the sticks as a key factor in Georgetown’s recent defensive success.

“Goalkeepers have been really steady,” Wiese said. “Goalkeepers have handled their business. There was a scary moment today. Giannis handles it. Opening few minutes against Maryland, [freshman] Tomas [Romero] makes a really good save. They’ve been asked to do minimal things. It’s been one or two important things to do and they’ve done that. They’ve been organizing really well.”

The Musketeers’ had more chances in the second half, but the Hoyas continued to dominate both possession and shots. In the 65th minute, Fischer did well to keep possession for a lengthy run on Xavier’s side of the field before laying it off to junior forward Derek Dodson, whose curling effort from the top of the box went just wide right. In the 74th minute, Georgetown’s persistent attack continued and senior defender Dylan Nealis nearly had a tap-in goal after a scramble in the box were it not for a spectacular diving save from Rosenberg. Rosenberg, who was forced into 10 saves on the day, made another pair of amazing stops in the 86th minute to keep his team alive. But in the end, the one-goal margin was just enough for the Hoyas to pull out the win. 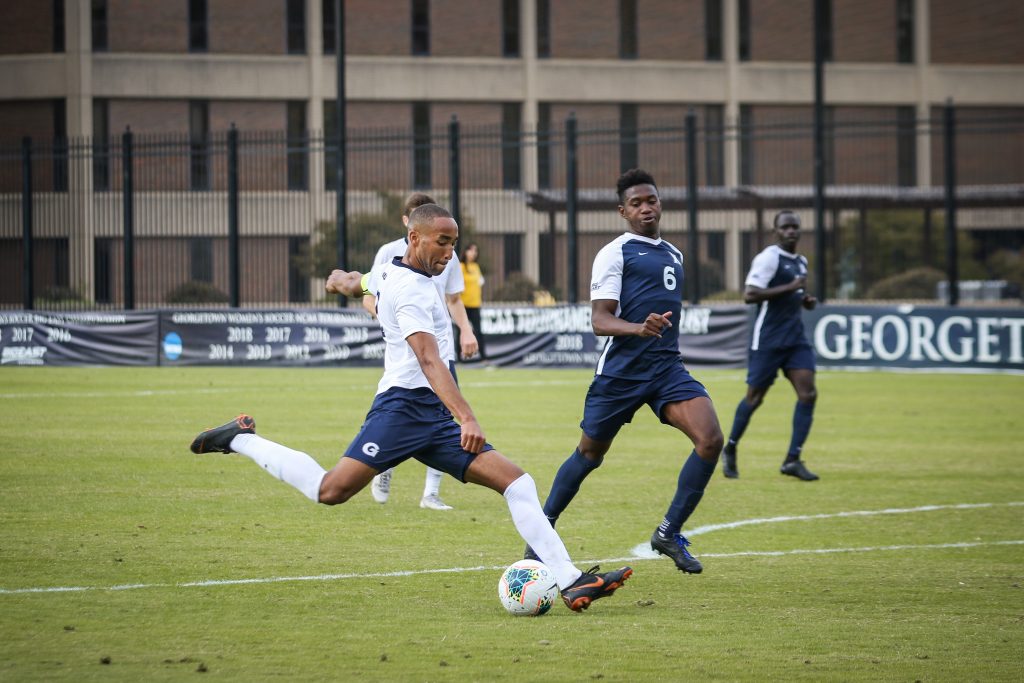 Dodson (left) fires away from inside the box. (John Picker/The Georgetown Voice)

“We have a group of players here that fundamentally, you feel like you’re going to get a performance out of enough of them on any given day with the depth we have,” Wiese said after scraping by with the win. “I think we’ve been handling the matches that you should be handling at home. Today was just enough.”

Next up for the Hoyas is a tough task as they travel up to New York to take on No. 7 St. John’s (11-1-0, 4-0-0 Big East), the only team in the Big East with more goals scored than Georgetown and the only team with just five goals conceded.

“The guys are going to have to be almost perfect to get a result up there,” Wiese said of his team’s upcoming match against the Red Storm. “St. John’s is a legitimate top-5 team. It’s great for the Big East. For St. John’s to be good in soccer, it’s kind of their rightful place historically to be one of the powers in Division I men’s soccer. It’s really fun to see them do it and I hope they’re terrible when we play them on Wednesday.”

The game kicks off at 7:00 p.m. ET on Wednesday with live stats and a stream available at guhoyas.com. For continued coverage of all Georgetown sports, follow @GUVoiceSports on Twitter. 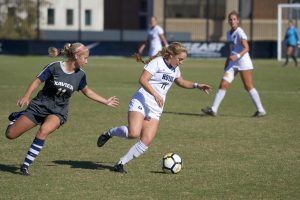 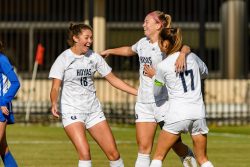