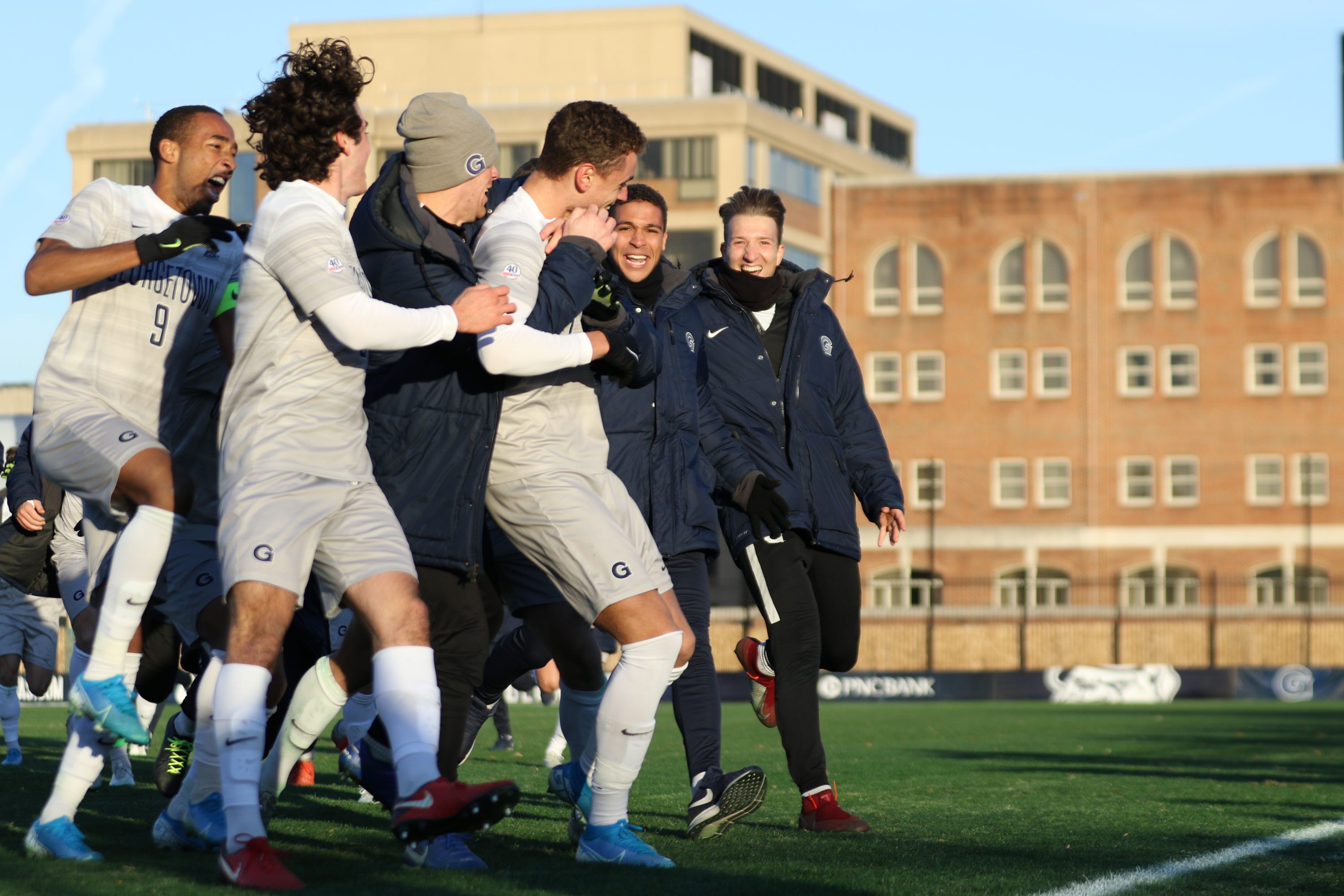 In Wednesday afternoon’s semifinal thriller, Georgetown and Butler went toe to toe for 90 minutes and two overtime periods, ending deadlocked at two goals apiece. Ultimately, it took a penalty shootout for the Hoyas to book their spot in the Big East Championship.

After a frustrating draw with Creighton in their final regular-season matchup last week, the No. 3 Hoyas (14-1-3, 7-0-2 Big East) could have entered the match against the Bulldogs (11-6-2, 4-4-1 Big East) lacking confidence. Instead, they quickly shook it off when sophomore midfielder Sean Zawadzki hit an absolute screamer just three minutes in to make it 1-0.

Just four minutes later, however, the Bulldogs equalized off a fortunate bounce that fell to senior midfielder Alex Lehtinen. Then, in the 16th minute, the Bulldogs nearly capitalized again, but senior striker Brandon Guhl’s blazing shot ricocheted off the crossbar.

The Hoyas looked the strongest on the right-wing, where Big East Defender of the Year Dylan Nealis, repeatedly slipped past his defender and launched inviting balls across the box. The Blue & Gray also looked dangerous whenever junior midfielder Jacob Montes picked up the ball on the counter and fed streaking forwards Derek Dodson and Achara. 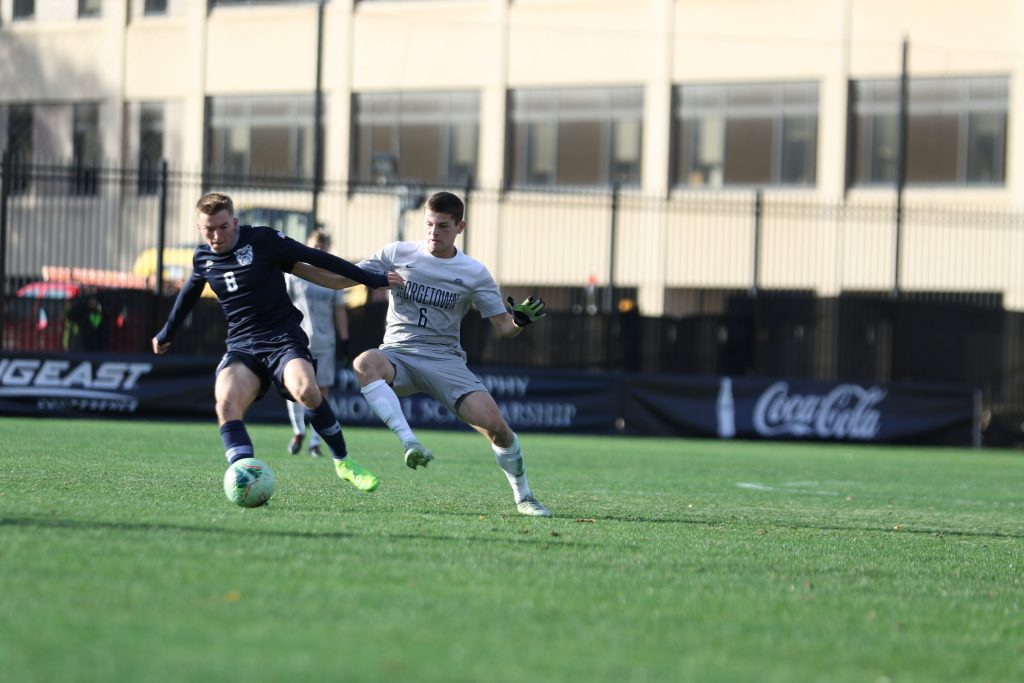 At the half, the game was knotted at one, with Georgetown outshooting Butler 7-3.

The Hoyas started off the second half similar to their start in the first, as some beautiful combination play between Nealis and Achara opened up space for Achara on the wing. Achara then played a ground cross that hit a sliding Bulldog defender’s arm, which earned the Blue & Gray a penalty kick. Stepping up with composure, Achara sent the keeper the wrong way to give Georgetown the 2-1 lead.

In the 70th minute, however, the Bulldog sophomore midfielder Jack Haywood played a fantastic through ball to Guhl, who, this time, slotted the ball into the back of the net.

After a thrilling ninety minutes, regulation ended 2-2, sending the game into sudden-death overtime. Both overtime periods were fairly uneventful, as neither side wanted to put themselves in a vulnerable position and give up the deciding goal.

Freshman striker Wilmer Cabrera Jr. walked up to take Butler’s first penalty kick. In Butler’s quarterfinal matchup against Creighton, Cabrera Jr. scored the game-winner from the penalty spot, earning his team a spot in this semifinal. This time, however, he would have to get past Georgetown’s freshman keeper Tomas Romero.

Cabrera Jr. stepped up for his team again, sending Romero the wrong way and placing the ball into the left side of the net.

Achara, who had already put one penalty shot past Butler’s sophomore keeper Gabriel Gjergji earlier in the game, stepped up to take Georgetown’s first penalty. Achara confidently hit the ball in the back of the net, making it 1-1 in penalties. 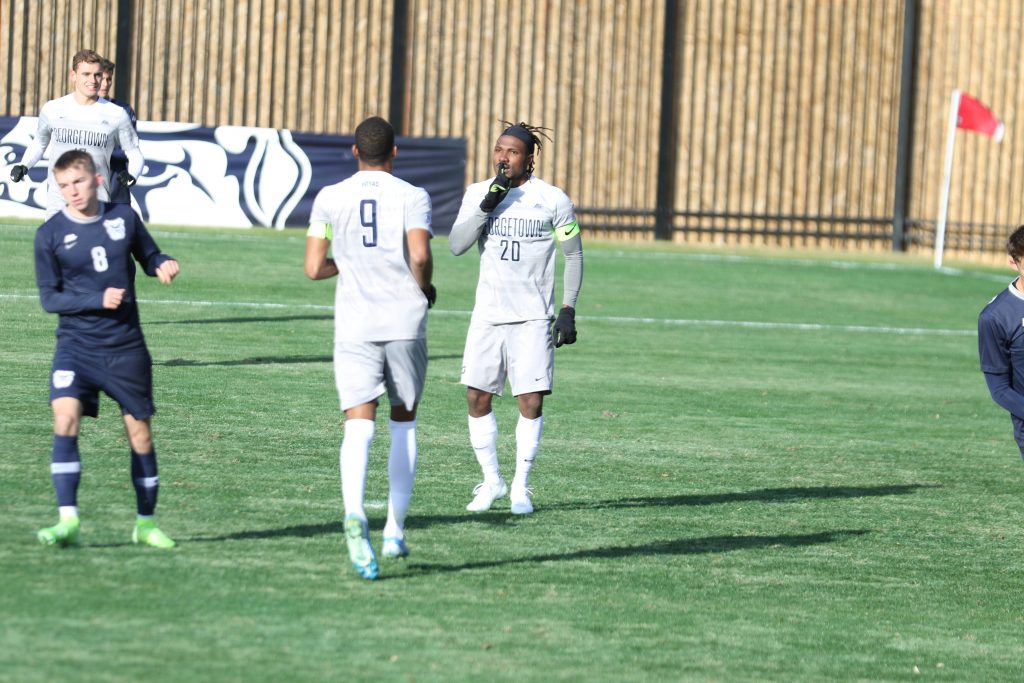 Both sides scored their next two penalty attempts.

Redshirt sophomore midfielder Jared Timmer sent Butler’s fourth attempt over the crossbar, opening up a chance for senior midfielder Jack Beer to give the Hoyas a lead in the shootout. Beer shot it to the left of Gjergji, who quickly sprang off his line and stuffed the attempt. The shootout was tied 3-3 going into the fifth round of kicks.

Lehtinen, who opened the scoring for Butler, took the long walk to the spot and mishit his shot wide left, giving freshman midfielder Dante Polvara a chance to be the hero. Gjerji dove right while Polvara placed the ball into the roof of the net to win the shootout and send the Hoyas to the Big East Championship.

The Hoyas will face Providence (14-5-0, 6-3-0 Big East) this Sunday at 12 P.M. ET on Shaw Field. Providence scored in the 87th minute to upset No. 8 St. John’s and earn their respective spot in the final. Live stats are available at guhoyas.com, and the match will be broadcasted on Fox Sports 2. Follow @GUVoiceSports on Twitter for updates and game recaps throughout the men’s soccer season, as well as coverage of the rest of the school sports throughout the year. 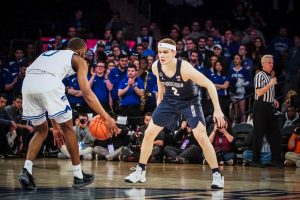