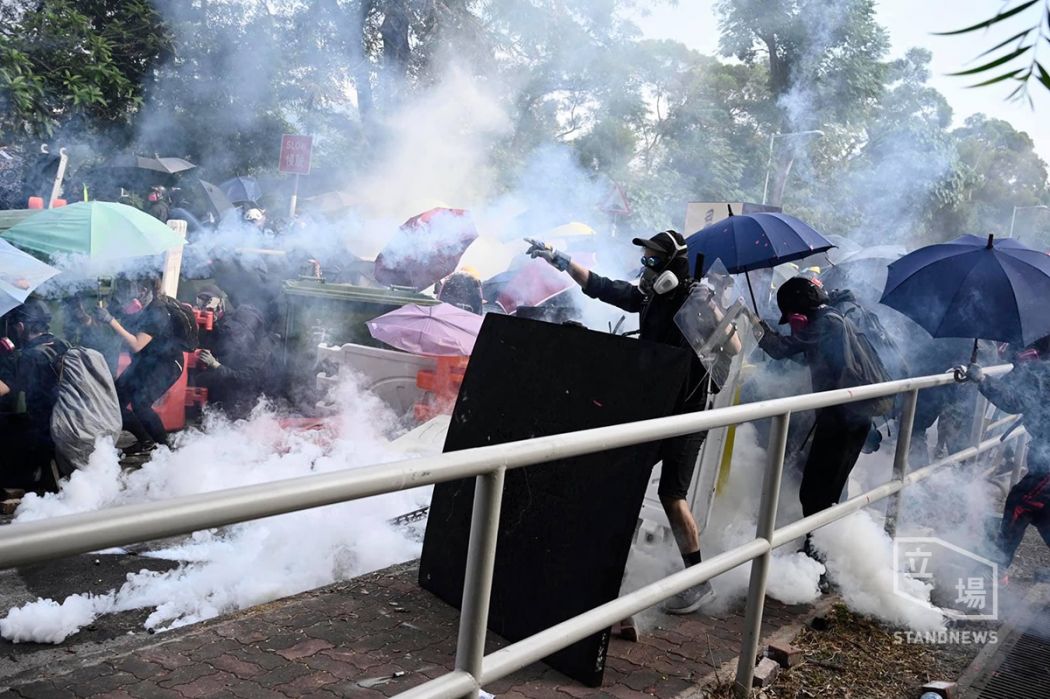 In November, Hong Kong police used excessive and violent methods to trap and arrest pro-democracy protesters congregating at local universities. Since protests across Hong Kong began in March, the frequency and severity of confrontations between police and protesters have escalated, in particular following policy changes in October that loosened the restrictions on the use of force by Hong Kong police. Following this change, police fired record numbers of rubber bullets, tear gas, and live rounds at protesters. This pattern of inordinate violence continued with the recent police sieges of multiple Hong Kong universities where protesters had assembled.

In a free society, there is no place for this kind of brutality toward protesters exercising their right to assembly. This editorial board condemns the use of violence against students and stands with the protesters in Hong Kong who have peacefully demonstrated or fought in self-defense.

The demonstrations started in June, when protesters sought a formal withdrawal of the controversial extradition bill that many feared would subject Hong Kong residents to mainland Chinese law. The movement grew, with supporters demanding greater democratic representation in the local government and increased autonomy from Beijing. Although the local government has since withdrawn the extradition bill, it has ignored the other demands, leaving protesters fearful that mainland China will continue to chip away at the region’s freedoms. According to organizers, two million people took to the streets of Hong Kong for widespread demonstration on June 12. While this number is contested by the police’s official statistic of 338,000 attendees, 2 million attendees would make it the largest protest in the city’s history.

The tension between protesters and the government has resulted in multiple unwarranted incidents of violence. While there have been some instances in which some protesters who do not represent the main movement have resorted to violent actions, the protests have been focused on peaceful demonstrations to apply political pressure. The brutal responses from police are wholly unjustifiable, fueling the protesters’ convictions that the Hong Kong government is suppressing democratic voices.

On Nov. 18, police laid siege to two Hong Kong universities where protesters had congregated, surrounding the campuses and arresting students who tried to leave. The protests at these colleges had intensified in response to an incident where an officer shot a student protester at point-blank range, leaving him in critical condition. During their siege, the police were armed with tear gas, rubber bullets, and live ammunition––weapons that should never be used in response to nonviolent activism on a college campus.

In response to this violence from authorities, we believe that students are justified in fighting back as a means of self-defense. Although there have been instances of unprovoked aggression from some protesters elsewhere in Hong Kong, the actions of the vast majority of student protesters have been measured and peaceful. This peaceful demonstration does not warrant the indiscriminate use of violence it has received from Hong Kong police. No matter who is protesting, police should be held to a high standard of restraint and proportionate force, a standard that Hong Kong police have repeatedly failed to meet.

When police stormed colleges like the Chinese University of Hong Kong in an attempt to crack down on protest organizers, students responded by building barricades and stockpiling makeshift shields to attempt to hold off the advancing officers. While some protesters resorted to building bows and arrows and gasoline bombs, this was in direct response to the heavily armed police officers who were wrongfully targeting their campuses. These students did not start this fight, and they have the right to defend themselves and their peers given the police’s tendency to use violence toward protesters exercising their right to assembly and free speech.

We stand in solidarity with the students of Hong Kong in the face of this violence partly because it evokes troubling incidents from our own history. In May of 1970, the Ohio National Guard fired into a crowd of unarmed Kent State University students who were protesting the bombing of Cambodia during the Vietnam War. The attack left 4 dead and 9 injured, showing the price of disproportionate force against university demonstrators. In a similar event that same month, police opened fire at Jackson State College in Mississippi, killing 2 and injuring 12. These shootings of unarmed college students shook the public and to this day remain a stain on America’s history. We urge the government of  Hong Kong to learn from this painful episode in our country’s past and to avoid escalation of violence toward Hong Kong’s protesters.

We stand with the students because of their position, but this editorial board also stands with the protesters at large—and we aren’t alone. The scope of the movement’s support can be seen in the results of the Hong Kong district elections held on Nov. 24. With a record-breaking turnout of 71.2 percent, compared to the 47 percent turnout seen in the last election in 2015, the local elections were widely seen as a referendum on the protests roiling the city. The outcome was a political earthquake for Hong Kong, with pro-democracy candidates capturing 389 of the 452 elected seats. Meanwhile, the pro-government candidates won only 61 seats, losing a staggering 242 seats in total.

These results show that the vast majority of Hong Kongers have come out in support of the protesters’ calls for democratic reforms. The government and its allies in Beijing must respond to this resounding display of support for the protest movement by addressing the demands brought forth by the people instead of continuing with its current autocratic approach.

It is clear to us that the Hong Kong students’ actions have been either peaceful or defensive in nature, and should not be equated with the violent police crackdowns that have targeted the movement. In this case, and all cases where students are unjustly targeted with police action, we believe that self-defense is entirely reasonable. However, they should never have to defend themselves in this way. The Hong Kong police’s actions of instigating violence against protesters and cracking down on university activism are unjustified. In the face of these breaches of public trust and duty, protest and voting are the only courses of action.