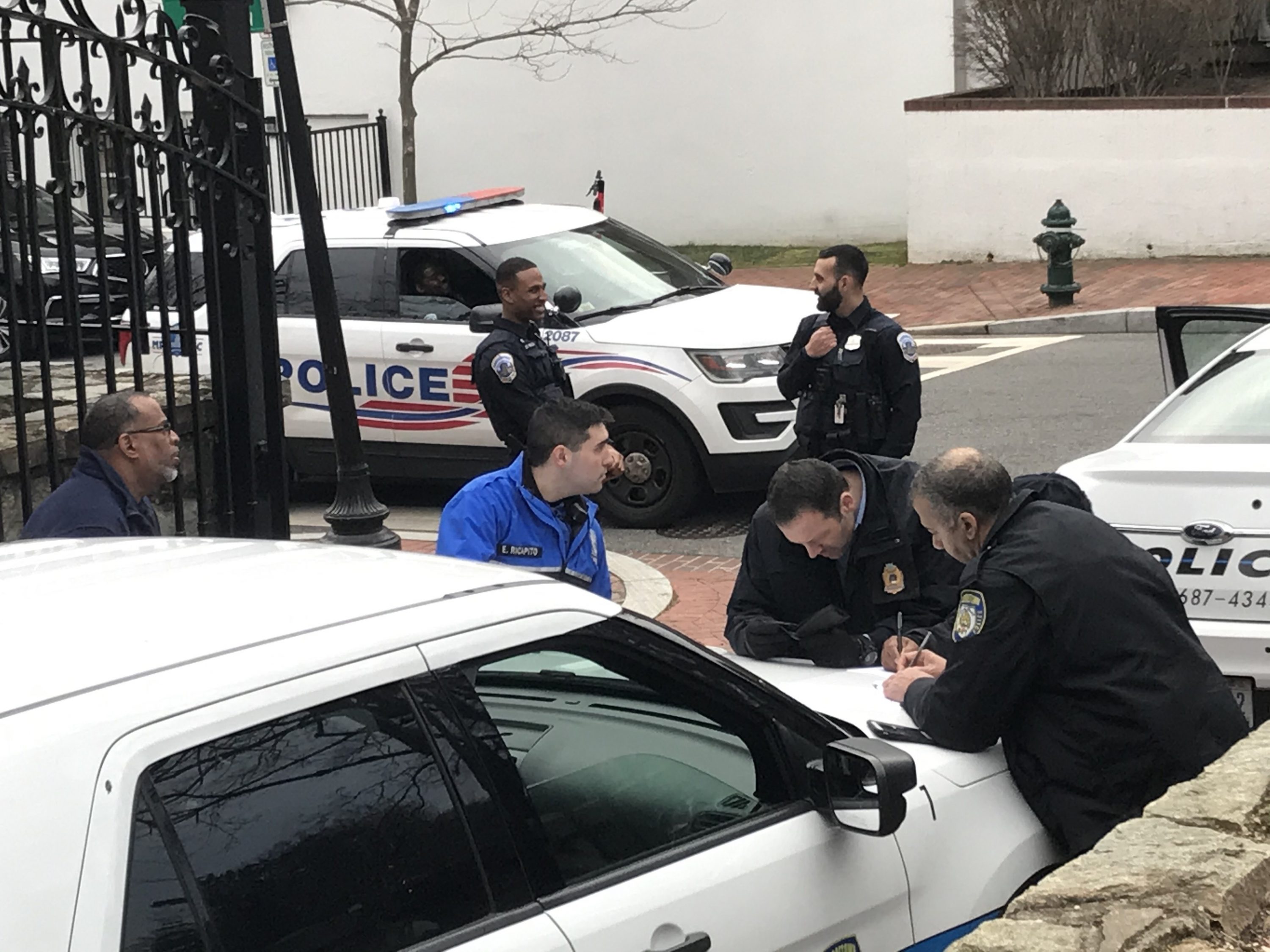 GUPD arrested two protesters in Red Square for unlawful entry on Jan. 27. The protestors, Luna Hernandez and Bo Logan, were working with the organization Refuse Fascism to advertise an anti-Trump rally coinciding with the current Senate impeachment proceedings.

Seven GUPD cars were present as Hernandez and Logan were removed from Red Square and driven off campus. As he was being put into a car, Logan was yelling “Stop fascism now!” and the URL of Refuse Facism’s website.

In an email, a university spokesperson wrote that earlier in the day, two non-students were asked to leave while protesting in and around Leo’s Dining Hall. As the first two activists were removed from campus, two more were discovered on Library Walk and also removed. It was after these initial encounters that GUPD arrested Hernandez and Logan.

“When two of these protestors later returned to Red Square, they were again asked to leave campus. In this instance, as non-students, the protestors were informed that they could continue to protest outside of the front gates or elsewhere off campus,” the spokesperson wrote. “When they refused, they were removed from campus by GUPD and arrested for unlawful entry.”

During her arrest, Hernandez also claimed the activists were talking to students in Red Square. The area is designated as a “public square” on Georgetown’s website. According to the website, public squares “shall be available, without prior arrangement, for individuals and groups during daylight hours for the purpose of exchanging ideas.”

According to refusefascism.org, Refuse Fascism was organized after President Donald Trump’s election. “RefuseFascism.org is a movement of people coming from diverse perspectives, united in our recognition that the Trump/Pence Regime poses a catastrophic danger to humanity and the planet, and that it is our responsibility to drive them from power through non-violent protests that grow every day until our demand is met,” the site reads.

Sunsara Taylor, one of Refuse Fascism’s co-founders and a spokesperson, emphasized the group’s policy of nonviolent protest, and said the organization was aware the two would be speaking to students in Red Square. “Refuse Fascism is a nonviolent organization,” she said. “There is not only a right but a responsibility to get this message to students.”

Taylor said Refuse Fascism has been protesting on the steps of the Capitol for every day of the Senate impeachment proceedings and plans to host a larger protest on Jan. 29, which the protesters were advertising. “People in this country and students in particular have a responsibility to learn about this, to debate on this, but also to act on it,” Taylor said. “History is being made.”

Taylor called the arrests “completely illegitimate” and said the group will demand an apology and that no charges be pressed against Hernandez and Logan. “Georgetown has a lot to answer to. Its students should not accept this. There is no more important matter for students to be learning about and acting on than the historic fight of whether or not Trump will be removed.”

Law enforcement prepares for the possibility of a second round of D.C. attacks