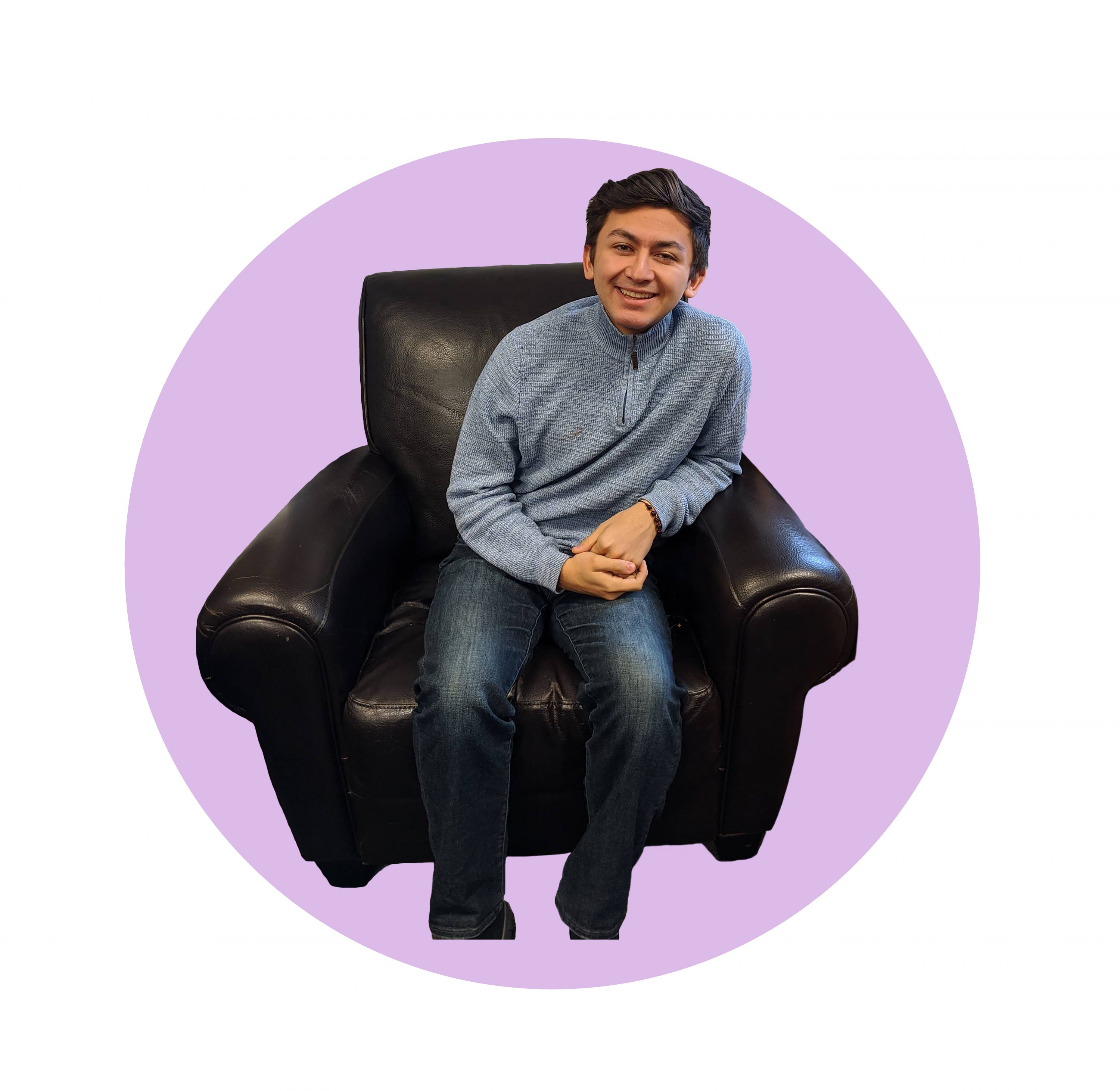 The Voice sat down with GUSA presidential candidate Joshua Marín-Mora (SFS ’21) to discuss his platform of sexual assault prevention, mental health advocacy, accessibility, and sustainability, as well as the departure of Isbel Deleon (COL ’21) from his ticket ahead of the GUSA Executive election on Feb. 6.

This interview has been edited for length and clarity.

The Voice: To start off, can you tell me a little about yourself and what you’ve done in your time at Georgetown?

Joshua Marín-Mora: My name is Joshua. I’m a junior in the SFS majoring in International Politics. And in my time here at Georgetown, I’ve tutored for the D.C. Schools Project. I currently serve on the Latinx Leadership Forum as representative for the Central American Student Association and as a GUSA senator. And I also used to volunteer for the Green Club as well, going out and cleaning parks.

TV: So why are you running?

JMM: So, The biggest and most important reason that I decided to stay in this race was because of the consistent issues that are persistent on campus, which include costs continuing to rise, the sexual assault rate hasn’t changed, and students aren’t feeling supported. Students aren’t feeling listened to. Students aren’t feeling as they ought to, which is the most important resource for Georgetown University and the platform that Isbel and I had built together. Those ideas live on—those ideas are what this has always been about. And I wanted to take an opportunity to try to fight those persistent issues on behalf of all of the students on campus.

TV: Can we get into your platform? What are those issues that you’re hoping to focus on and plans you might have?

JMM: Sure, sure. How about I start with sexual assault? I think that it is incredibly disheartening that not only have our rates not changed since the most recent Campus Climate Survey, but also how our rates are above average for other participating universities. We need more institutional support, of course. I’m incredibly supportive of the university and its hiring process for the full time Title IX investigator. But I also wanted to find ways that we can address it from within students, from the ground up, per se. First would be changing what it means for a club to be compliant in order to receive benefits. Right now, you need to have three students in that club to be trained for sexual assault and bystander intervention. I think that needs to be expanded to every member of a leadership board for each individual club. Something else that we want to try is a sober student intervention program. Basically in these social events hosted by these different organizations, there has to be at least one—there can be multiple—sober students that are distinguishable that have received training to be able to intervene in a situation. This isn’t to replace any professional resources that survivors or students may need. This is simply somebody that [may] help intervene or to direct you to other resources. Clubs are very powerful on campus. And it’s in these spaces where, unfortunately, there’s a lot of toxicity as well. So that reform has to carry down into the larger student body in that way.

I also wanted to talk about mental health. Mental health is really important to this campaign. I plan to centralize a database of resources that is readily accessible for all students, so that students can readily distinguish which resource may be best for them. That needs to be broader and clearer. I’m very supportive of the off-campus mental health stipend. Finding ways to fund that is what becomes a question. Maybe we can work with the Corp in a partnership where, if you purchase this particular item, a portion of that purchase would go to the mental health stipend. Another way, club funding. I think that we really need to start having a large conversation about how this happens, because I know a lot of organizations and leaderships in these organizations that go into a mad dash at the end of the fiscal year to make sure that their budget is spent so that the following year they won’t risk receiving less money because they have that unused funds. So this would engage a conversation with student leaders and with SAC to see if if an organization has leftover funding at the end of the year, if they were to donate that, say, to the mental health stipend, for example, then SAC leaders would not take that into consideration as a potential reason to diminish the budget for the following year for that organization.

Accessibility is another big issue. I was working as accessibility policy chair in the Senate.  I can’t say I’m an expert by any means, but I have learned so much more about accessibility. As someone that is physically able bodied that I would never have seen before. For example, we can talk about the Georgetown accessible route map. It shows which spaces on campus are ADA compliant, but ADA compliant doesn’t always mean it’s the most accessible space for everybody. Put on the map in these locations that are labeled as a complaint, but they’re ADA compliant for whom. Those details are incredibly necessary. ICC auditorium  is ADA compliant, but someone in a wheelchair can’t be put on the stage and that needs to be heard, especially if there’s logistical errors when it comes to planning for programing, etc.. People need to know what spaces are available for whom. And I also had a meeting with a representative from the Georgetown Student Veterans Association and also the Georgetown Disability Alliance on a potential event in which student leaders would take a wheelchair tour of campus in order to see better what it means to be somebody in a wheelchair on campus. If I were to be elected, I would definitely continue working with them and engaging these students in implementing that project.

I think sustainability is a really important issue. I completely support the divestment from fossil fuel referendum as well as the Blue Campus policy referendums, just because I believe that those are the most consistent ways for Georgetown to uphold [its] values. And it’s also the best for our students and our planet. Some of the initiatives that we were thinking about were single use plastic on campus. I know that Georgetown partner renewed its partnership back in 2013 with Coca-Cola, for example. I know how many vending machines on campus have plastic Coca-Cola bottles in them. But there’s one vending machine that I’ve seen thus far, in the basement of Healy, right by the GU Politics office: everything is aluminum. I think that we need to make that for all vending machines, remove the plastic bottles and replace them with aluminum.

I would love to work with the administration to see if in common rooms in more residential buildings to follow an initiative like they did in Darnall Hall in 2015, which was to replace the lights with motion sensor lights in common rooms. That’s another way we can address reducing energy consumption. We can work with Aramark to address meat consumption. How many universities are beginning to implement Meatless Mondays? We haven’t had that conversation as well, particularly for Leos.  If we’re not on the frontlines trying to spearhead these initiatives, then we’re failing. I mean, we’re a leading institution in this country. We have a lot of opportunities here to continue to take these next steps.

TV: Do you have any thoughts on the GU 272? And what that looks like if you were elected going into your term?

JMM: Yeah. So a very good question. Over 60 percent of the student body turned out in support of the referendum. And I have made this point very clear: Georgetown students are its most important resource. It is appalling that the university responded in an email that, even more appallingly, caught the leaders at the forefront of the 272 movement off-guard. That was basically swiping aside the initiative and implementing their own initiative without even the consultation of the student leaders. That wasn’t what we voted on. We can’t keep having this type of relationship where A, our word isn’t being taken into the utmost consideration and B, where we keep getting these vague buzzwords. I don’t think that it’s absurd to demand and ask for reasonable timelines so that we can be holding ourselves accountable.

TV: If you are elected, how do you plan on implementing the policy you’re talking about? What do you think the greatest challenges might be for you?

JMM: The most important thing is student engagement. It has to be. It means working with student organizations. It means engaging students who may not even be student leaders. It has to be with the students. That would be the most important thing. So challenges. I think that, as I mentioned before, I think that there’s a lot of funding concerns. I can think of how many initiatives that I believe that Georgetown needs to continue to expand its funding on, whether that be CAPS, whether that be the mental health stipend, etc. But I am a firm believer that you have clear plans and you engage as many stakeholders as possible, [such as] teachers, student groups, different university organizations like the Center for Student Engagement.

TV: Isbel left your campaign. What would you say to students who might think you are a weaker ticket without a VP or [who] might start looking elsewhere?

JMM: Mental health takes precedence. My parents are really hard-working, and they didn’t go to college. And so I had a mindset, and sometimes still have it, where I need to push through it and just get these things done regardless of what it does for me. Cura personalis. I know it’s one of Georgetown’s values, but we can talk about it, but we need to start living it. I would say at the very least, look at Isbel as an example that I viewed to be courageous, and I commend her and I completely respect it. It is not a sign of weakness. It’s a sign of strength. Our platform, those ideas live on. We are talking about what we believe to be the most important pressing issues on campus that cannot continue. We got in this literally just to help students. And that’s why I stayed in it.

TV: Final question. If you play a song every time you walk into a room, what would it be and why?

More: gusa, on the record

GUSA works to abolish the Senate and restructure the executive