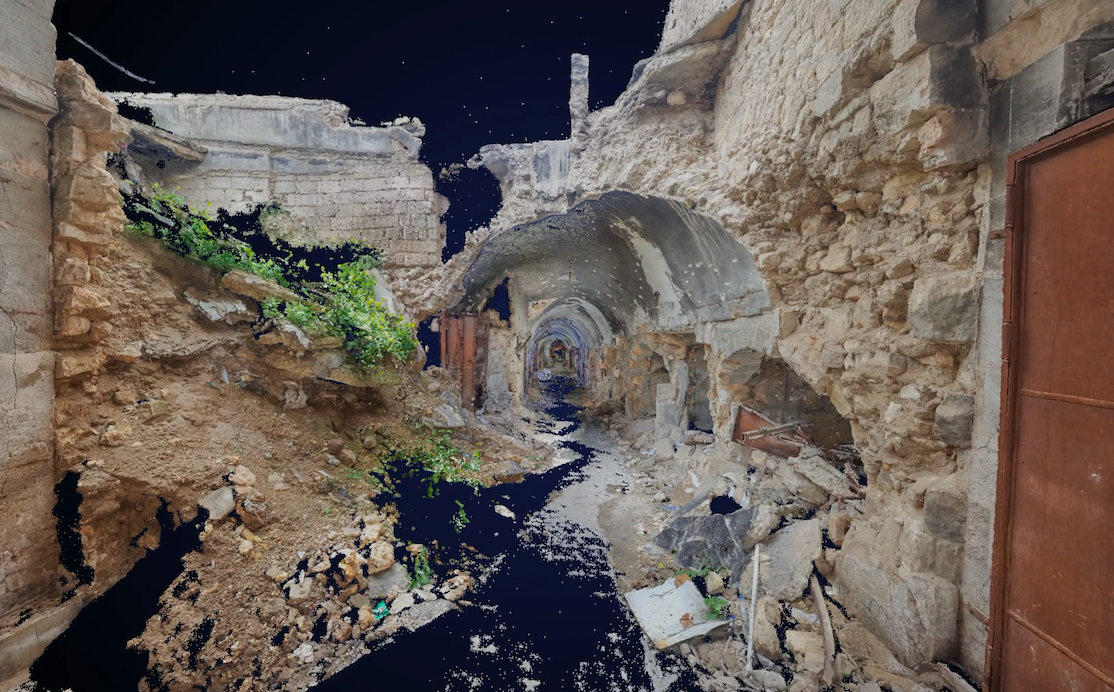 In a new, innovative take on what constitutes an art exhibit, the Sackler Gallery of Asian Art presents: Age Old Cities: A Virtual Journey from Palmyra to Mosul. Unlike any other exhibit I’ve ever attended, this show consists of completely virtual art elements. Ranging from digital reconstructions to projected photographs of ancient, historical sites, the exhibit is, in fact, a technological wonder.

The basis of the exhibit is a juxtaposition of ancient religious sites in Palmyra and Aleppo, Syria and Mosul, Iraq in the 20th Century to the 21st Century. The stark comparison is haunting and quite saddening.

These three cities have been strongholds for the terrorist group ISIS (Islamic State of Iraq and Syria). In an attempt to reinforce their message and as a form of propaganda, ISIS has begun to systematically and purposely destroy religious sites belonging to the ancient Greco-Roman civilization as well as, in an ironic turn of events, past Islamic caliphates. Any sites belonging to the Antiquity are targets for ISIS’s desecration movement. ISIS is destroying key components that have been foundational to the Syrian and Iraqi people for centuries. 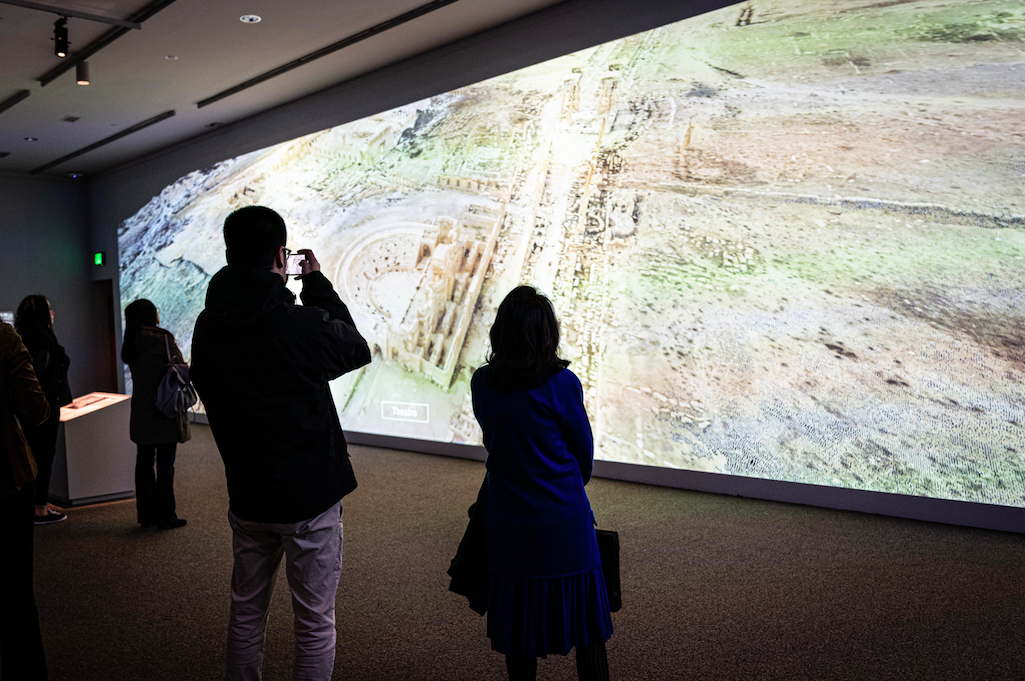 The exhibit begins in Palmyra, which is located in central Syria. In Antiquity this city was a hub for trade in the Middle East. Devastatingly, ISIS has targeted ancient sites that allude to the historical economic and commercial importance of Palmyra. The first section of this exhibit is a dark room, the only light emanating from a projection on the wall. The projection features a digitally reconstructed market in modern Palmyra. Individual stalls are barely distinguishable amongst the stone and wood debris. The projection moves in a manner that tricks your mind into feeling as though you are walking through this market amidst the ruins. This hyperrealism effectively transports us to Palmyra.

To the right, the exhibit continues with another large scale projection of Palmyra. This projection is a bird’s-eye view reconstruction of the city, highlighting sites of cultural importance that have been destroyed by ISIS. One of these sites, the Temple of Bel, dates back to 32 C.E. Bel is an ancient Mesopotamian God. Perhaps ISIS targeted this site due to its reference to paganism—it was among the first places destroyed by the group in 2015. The projection shows a few remaining columns and lots of marble and stone strewn about the area where the temple once stood. After a few moments, the projection shifts to include an overlay superimposed on the rubble of the temple. The overlay, made of stark white lines, illustrates what the glorious Temple once looked like.

As you turn to leave the section of the exhibit dedicated to Palmyra, you are faced with another wall filled with a projection. However, this wall is projecting photographs taken in the last century. The photographs, taken as recently as 2003, show the now destroyed sites of Palmyra in their past pristine condition. The juxtaposition of the destruction with the reconstructed photographs is chilling. Perhaps even more evocative is the fact that the reconstructed sites were clearly still standing within many of our own lifetimes. Although I will never again be able to go and visit the Temple of Bel, it is infuriating to know that it was possible to see the glory of the remnants of Antiquity culture so recently. ISIS is selfishly removing a cultural and historical experience from the greater world population. 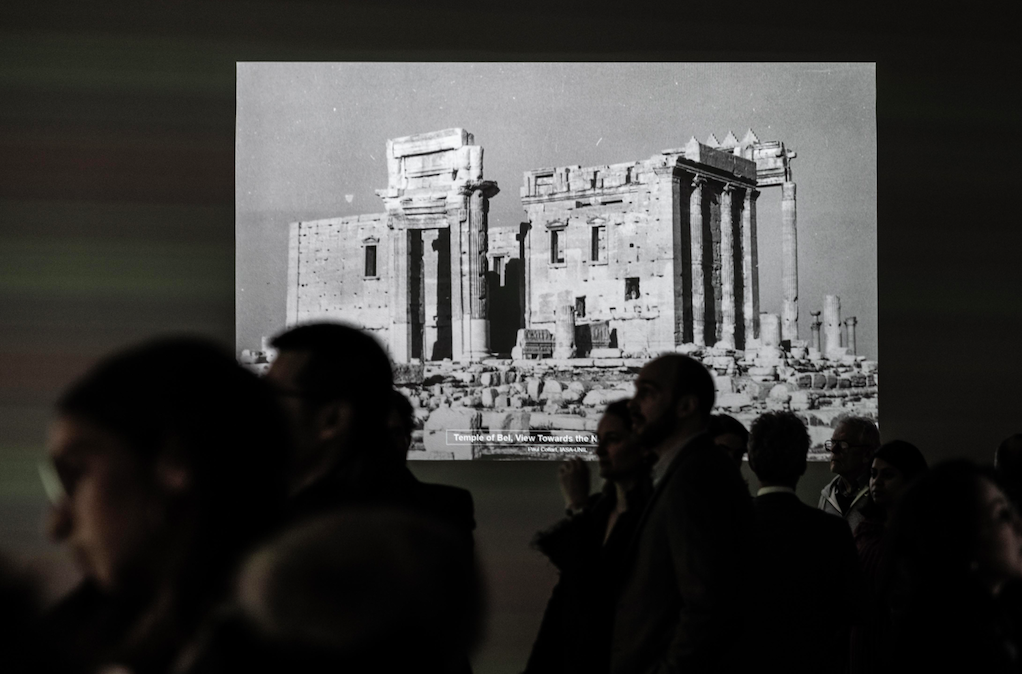 The Aleppo portion of the exhibit features another projection of the city from a bird’s-eye view. In Antiquity, Aleppo was home to both the Roman and Byzantine empires, which were eventually conquered by the Arab world in 637 C.E. At the center of the projection is the Umayyad Mosque. Built by the Islamic Caliphate in the early 8th century, the mosque was repeatedly restored and updated throughout history. Despite historical efforts to preserve this important figure of Islamic culture, in a seemingly poetic act of evil, ISIS brought down the mosque’s minaret in 2013 and the mosque has been left to waste away since then.

As I took in the mass destruction of the mosque, my eye couldn’t help but catch sight of a photo of a beautiful minaret directly to the left of the projection of Aleppo. It dawned on me that this is indeed the minaret of the Umayyad Mosque. Shown in a color photo, the minaret is in remarkable state boasting vibrant greens and blues. My heart dropped, knowing that only two decades later, this minaret will be destroyed forever, laid to waste in a pile of rubble, despite its enduring legacy.

Finally, the last stop of the exhibit is in Mosul. Located in Iraq, Mosul has been in and out of ISIS’s hold for the past few years. Again, the exhibit uses projection techniques to depict the city from a bird’s-eye view and juxtaposes the destruction with relatively recent photographs of the same—but fully standing—monuments.

In a room off to the side of the Mosul portion of the exhibit is a documentary chronicling the rise and fall of the Mausoleum of Nabi Yunus. Perhaps in the biggest display of irony, this monument was destroyed by ISIS forces in 2014, only to lead to the uncovering of ancient neo-Assyrian vestiges underneath the remnants of the mausoleum. In this case, evil gave way to a redemptive good. 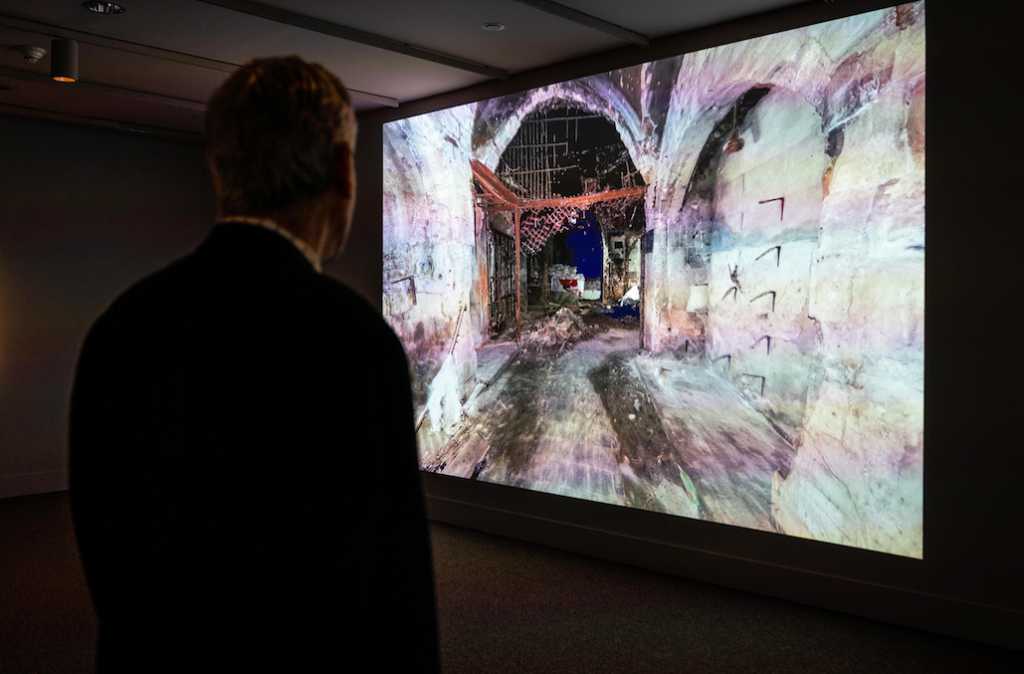 Further controversy over the destruction of the Mausoleum of Nabi Yunus stems from the Islamic historical significance of this monument. Nabi Yunus is considered one of the 12 prophets by all the Abrahamic religions, including Islam. A part of the Quran is even dedicated to Nabi Yunus. However, ISIS considered the site to be heretical because the group does not believe in any form of commemoration or reverence of the dead. One of the biggest takeaways from the exhibit is the hypocrisy of ISIS’s actions.

On exhibit through Oct. 25, 2020 in gallery 28 of the Sackler Gallery, Age Old Cities is a must-see. An amazing presentation of the power of digital methods to bring art to worldwide audiences, the show is a different experience than a traditional art exhibit. Furthermore, the emotionally evocative nature of the exhibition’s subject is a profound statement on the fragility of historical sites. It is vital that we cherish and preserve reminders of history where they exist in order to secure a better future for our world. We must not let fear and radicalism make us forget where we came from.