Wisemiller’s Deli raises over $25,000 to stay in business

Wisemiller’s, a local deli frequented by Georgetown students, raised over $28,000 on GoFundMe to remain open in the face of the COVID-19 crisis.

The over 800 donors represent students, neighborhood residents, and alumni who, as they have returned home or remained sheltered-in-place, have not been able to stop in to buy a snack or order their favorite sandwich from the 67-year-old deli.

Businesses across the county have felt the strains of shut down orders, as customers stay at home and reduce spending due to their own financial concerns. The restaurant industry has been hit hard across the district, with even prestigious eateries such as Wolfgang Puck’s The Source and Momofuku shutting their doors. Especially endangered are local businesses such as Wisemiller’s that rely on a nearby campus, large office complex, or factory to turn a profit. Employees of these businesses are seeing reduced hours or layoffs as owners become increasingly worried about their ability to pay suppliers or make rent. While many businesses have asked their community to continue supporting them through take-out or delivery orders, Wisemiller’s problem was a little different, with only a fraction of their usual customers even remaining in the D.C. area.

Gina Vogel, the owner of Wisemiller’s, first made a GoFundMe on April 23 with a goal of raising $20,000. Though they were still providing groceries and carryout, she wrote, the loss of students and employees from Georgetown, Holy Trinity, and Visitation dramatically reduced their customer base and threatened the livelihoods of the 14 families that rely on income earned from the deli. The deli was seeing about ten percent of its former sales, even with curbside pick-up and venturing into delivery for the first time ever.

“We only wish to continue to serve our community but we need to ask help from our patrons to get through the next few months,” Vogel wrote. “We have always tried to be here for you. Now we must ask you to be there for us.”

At first, donations trickled in. Two weeks after Vogel made the post, Wisemiller’s had only received about $2,500, mainly from friends and family, and far below their goal of $20,000. However, things began to pick up by May 12. Small donations, often between eight and $20 piled up, as the fundraiser was shared over 1,000 times and the number of donors climbed to 800. Even after their goal was reached, donations continued—at the time of publication, the deli has been given $8,000 more than it requested.

Vogel attributes that drastic increase in donations to the support of Eddie Ferrar, a former employee, and Georgetown graduate, and Father Raymond Kemp, a professor and special assistant to the president at Georgetown. Once the two promoted the cause on social media, donations skyrocketed. “Suddenly we went from about 35 donors to 400 donors,” she said.

The staff of Wisemiller’s was relieved that the community showed such support in their time of need. “We’re just humbled and astounded by the support we’ve received from former students, people who’ve worked for us, former and administrators at Georgetown,” Vogel, who herself is a former Hoya, said. “Wisemiller’s has been part of the Georgetown community since 1953 and it was a critical part of my college years at Georgetown and I feel like we’ve been entrusted with its legacy.”

When Eileen Huhn (COL ’22) saw that the deli, affectionately known as “Wisey’s,” was in danger of closing, she knew she would be donating. “Besides the fact that a chicken madness is arguably the best food that I’ve eaten in Washington D.C., I’ve literally taken my whole family to Wiseys,” she said. “Giving back is a good idea, and I know that it supports several families.”

“It’s a place that everybody goes and everybody also really loves, so I think the idea of Wisey’s going away is so terrible that everyone kinda flocked to the GoFundMe.”

The comments on the fundraiser revealed the intense community support Wisemiller’s enjoys. “Wisey’s fed me, I must feed them,” wrote one donor. “Thanks for being part of the Georgetown experience,” wrote another. Many simply commented their orders, often the signature ‘hot chick’ sandwich with an oreo cookie.

A few notable names appeared on the list of donors, from Norah O’Donnell, a Georgetown alum and anchor at CBS, to award-winning chef Jeff Henderson. “We’re waiting for Bill Clinton,” Vogel said with a laugh.

Though the fundraiser has surpassed its original goal, Vogel elected to keep the site open because of increasing stresses on the business. When the deli realized the university would be fully online for July and August as well, they knew $20,000 wouldn’t be enough to continue to pay all of their employees who wish to continue working over the summer. “How can a small business survive for six months with ten percent of its revenue?” Vogel asked.

The answer, she hopes, is continuing to operate while relying on neighborhood support. “It hit us, an idea born of hope and belief in the relationship between Wisemiller’s staff and our customers,” Vogel said.

“We just want to make sure Wisemiller’s stays around for the students when they come back and for future generations.”

Home for the Weekend 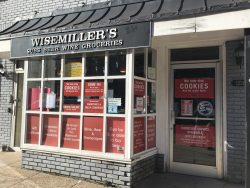