In wake of the Trump administration’s travel ban, attempts to disassemble DACA, and crackdown on immigration at the U.S.-Mexico border came another attempt to curb immigration—this time directed towards international students studying at American universities during the COVID-19 pandemic.

Though it has since been rolled back, a July 6 Immigration and Customs Enforcement (ICE) ruling would have required international students studying on F-1 visas in the United States to leave the country if they elected to take a fully online course load or their universities did not offer in-person classes for the Fall 2020 semester. This ruling would have impacted over one million international students studying at U.S. institutions of higher learning and received criticism from both international students and universities, in the form of a lawsuit led by Harvard and the Massachusetts Institute of Technology (MIT).

Before it was rescinded, the ICE regulation threw the international student community into uncertainty, and its repeal does not guarantee them safe housing or a sustainable learning environment for the fall semester.

Ashanee Kottage (SFS ’22), an international student from Colombo, Sri Lanka, saw the ICE regulation as placing vulnerable students in a hostage situation if they want to protect their visa status.

“I have a lot of privilege of having a safe and happy home life,” she said. “I felt safer here than returning to Georgetown, but the ICE regulation meant that if I chose to go fully online in the fall, my I-20 and service record would be canceled and I would have to reapply for all of that, which is a bureaucratic and logistical nightmare.”

Kottage did not wish to go through the stressful process of reapplying for a student visa, but a return trip to Georgetown would have required 22 hours of flight-time and travel across three borders—a journey she feels involves significant risk of contracting COVID-19.

“I would feel like I’d be putting myself in so much risk, not necessarily because the university was asking me to do so but because the U.S. government was saying I had to,” she said.

The ICE ruling also pitted international students living in the U.S. against those living in their home countries, according to Kottage. While she hoped that Georgetown would move towards a virtual semester to protect students during the pandemic and prevent her from having to return, she knew this would jeopardize the situation of international students residing domestically.

“I was here hoping and praying that Georgetown would go fully online, but that would harm international students in the U.S. really really badly because they would basically get deported,” she recognized.

After the announcement of the new ICE regulations, Georgetown joined a coalition of 58 other universities, filing an amicus brief in support of Harvard and MIT’s lawsuit against the ruling. Before the ICE guideline was rescinded by the Trump administration on July 14 after facing legal pressure, University President John DeGioia spoke out in opposition to the policy.

“Our university strongly opposes this reckless action,” DeGioia wrote in an email to members of the Georgetown community. “It creates new and unnecessary barriers for international students and puts their health, stability and academic progress at risk if they are unable to participate in classes in person.”

This is not the first time Georgetown has pursued legal challenges to Trump administration policies that threaten the security of international or immigrant students. In 2017, Georgetown signed an amicus brief challenging Trump’s Executive Order 13768, which banned travel from predominantly Muslim nations to the United States. In 2019, Georgetown joined 18 other universities in condemnation of the Trump administration’s attempt to end the DACA program.

Following DeGioia’s email, the deans of the SFS, MSB, SCS, and McCourt School of Public Policy released similar messages to their student bodies standing with their international students and criticizing the ICE regulation. In an email to SFS students, Dean Joel Hellman went a step further, promising that all international students in the SFS would be offered the amount of in-person classes necessary for them to maintain their visa status. The university did not announce a plan to provide options for international students before the ruling was rescinded.

“I want to make it absolutely clear that SFS is a community that requires diversity as we require air or water, since we cannot educate students about international affairs without having truly diverse perspectives in our classrooms,” Hellman wrote. “International students are core to our existence.”

She is also concerned about what administrations and professors intend for asynchronous learning. Kottage is currently nine and a half hours ahead of Eastern Standard Time, and after daylight savings, ten and a half hours. After experiencing remote classes at the end of the Spring 2020 semester, she knows that night classes are untenable for students with significant time differences.

“Days bleed into each other, boundaries get very weird between work and school and family and play,” she said. “Online classes at the end of spring were miserable because they were mostly synchronous and we had to negotiate individually with our professors.”

Earlier in the summer, Kottage and Felipe Lobo Koerich (SFS ’21) drafted a petition to the administration calling for the university to include international students in discussions regarding the fall semester, offer both synchronous and asynchronous learning opportunities, and offer substantial help in responding to the needs of international students.

“One of our main concerns was what does asynchronous mean? It shouldn’t just mean you have recorded lectures whereas everyone else gets in-person stuff,” she said. “We need something more robust and proactive on behalf of the administration.”

Kottage emailed her professors for the fall semester asking them to consider asynchronous syllabi for international students. Two of her professors have replied that their courses require too much discussion and group work for alternate or online coursework to fulfill requirements.

“I think this notion of ‘asynchronous’ meaning integrating students into the synchronous syllabus is just wrong and is creating an automatic hierarchy for in-person students to be prioritized in their academic experience.”

Kottage’s final criticism of the university’s response to international students was the lack of housing flexibility. DeGioia’s Fall 2020 Plan for Reopening communicated to students on July 6 suggested that students with permanent addresses in timezones greater than five hours away from Eastern Standard Time would be able to apply for on-campus housing. Housing application rejections revealed, however, that only 150 spaces were open for the over 500 upperclassmen who applied for on-campus housing on the basis of unsuitable home learning environments, including those in dramatically different time zones.

Considering the pandemic and the fact that college students are usually 18 to 23 year-olds with limited financial resources, Kottage is dismayed that many international students have to face such uncertainty regarding their housing and immigration status in a time of widespread anxiety.

“It feels like a horrible thing to experience as college students, when there is literally a global pandemic and just college to worry about, to now also have to worry about our own safety and visas.” 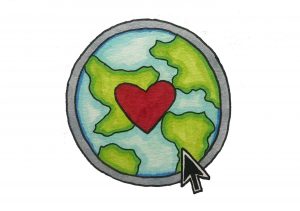 “It’s celebrating without us:” For the first time in 50 years, Earth Day took place indoors