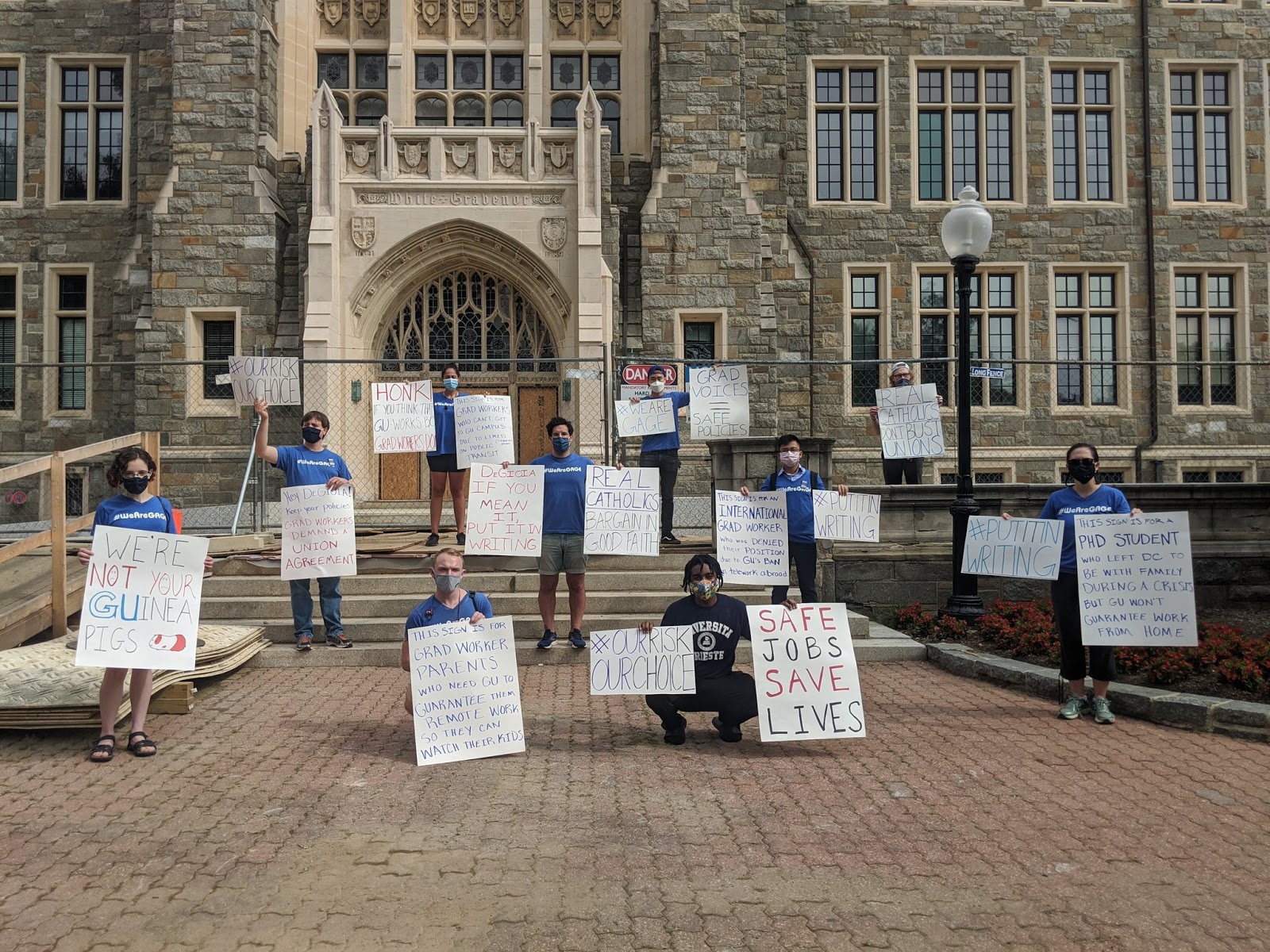 Members of GAGE at a rally this summer in support of COVID-19 protections. Image provided by GAGE

The Georgetown University Student Association (GUSA) and Georgetown Alliance of Graduate Employees (GAGE) held a joint rally to demand a more equitable fall reopening plan on Aug. 21. The rally consisted of an in-person demonstration on campus and in front of President John DeGioia’s house, as well as a virtual protest on Zoom with speakers representing both GUSA and GAGE.

At the heart of this rally was the feeling that the university was not listening to the concerns of graduate and undergraduate students regarding the fall semester. In recent weeks, GAGE members have expressed frustration at what they view as attempts by the university to backtrack on previous promises by refusing to sign a letter of agreement regarding graduate student protections. Undergraduate students, led by GUSA, continue to protest the vastly reduced financial aid packages that many received in late July.

Doctoral student Daniel Solomon, vice president of GAGE, called for solidarity between graduate workers, international graduate students, and undergraduates in demanding action from the university. “We’re united today by a common vision that Georgetown protects the health, safety, and livelihoods of our community when the administration is accountable to its workers and to its students,” he said.

This sentiment was echoed by Sydney Gilbert (SFS ‘23), a member of GUSA’s Socioeconomic and Academic Affairs Policy Team. “They’ve made it clear that they don’t care about graduate employees, and they only value undergrads for their money, and we’re sick of it,” she said.

“We’re standing together, GUSA and GAGE united, to fight back.”

Despite claiming to meet undergraduate students’ demonstrated financial need, the university released a round of revised aid packages that were inadequate and “left students wondering if they could still attend Georgetown less than a week before classes start,” according to Gilbert.

Gilbert argued the university needs to release and explain the mathematical formula it uses to calculate demonstrated need. “Without a public formula, they can claim to meet full need, while making up any numbers and demanding students pay that much,” Gilbert said.

Jeffrey Tsoi, the chair of GAGE’s international student committee, described the uncertainty felt by another group, international graduate workers, and criticized the lack of information regarding plans for remote work.

Tsoi cited the case of a Ph.D. student in the Spanish and Portuguese department who returned to their home country and was denied university employment for unknown reasons, despite fulfilling all of the U.S. government requirements to work remotely. According to Tsoi, this student was told they would be able to teach in the fall and was only informed about the denial of employment weeks later when the student asked the university about class plans.

Calling on the administration to release their specific conditions for employment, Tsoi said that multiple international workers had already been denied their jobs, which they depend on for their livelihoods. He contrasted Georgetown’s response with other universities like Yale and the University of Virginia, which have already announced plans for international students to work from abroad.

GAGE President Jewel Tomasula explained GAGE had repeatedly asked the administration to issue a written guarantee that all graduate students, especially international students, would be able to keep their jobs and choose to work remotely if needed. According to her, the university did not agree to this and instead sought to hamper ongoing negotiations with GAGE about fall reopening protections.

“The university has been working thoughtfully on developing a policy for providing graduate students flexibility in fulfilling their service assignments for Fall 2020 in light of the COVID-19 pandemic.  Under the current version of the draft policy, graduate students will not be compelled or pressured to teach on campus this fall,” a university spokesperson wrote in an email to the Voice earlier this month in response to an inquiry about the status of graduate workers.

“The university has also met with, and intends to continue discussions with, representatives from GAGE about the draft reopening policy.”

Nile Blass (COL ‘22), a representative from the Black Survivors’ Coalition, highlighted the disconnect between the university’s emphasis on Jesuit values and what she saw as its prioritization of money over students’ wellbeing.

“Georgetown is obsessed with the image of morality and compassion,” Blass said. “You can’t articulate an image that you’re unwilling to take sacrifices to commit to.”

“It’s just a question of whether or not Georgetown is going to live up to its image and its facade of Hoyas for others and actually care for other Hoyas.”

Regarding the student movement for improved communication, remote employment, and support for low-income students, Solomon expressed hope that GAGE and GUSA would be able to hold the administration accountable through continued activism.

“When we fight together, we win together.”

[…] Amidst COVID-19, the battle for improved working conditions has an increased sense of urgency. At Georgetown University, graduate workers aligned with Georgetown’s national and international undergraduate and graduate […]