Following a report on the eviction process in Washington, D.C., Georgetown’s McCourt School of Public Policy hosted a panel discussion with the report’s authors, city officials, housing advocates, and lawyers to discuss the research.

Professors Brian McCabe and Eva Rosen explained the major implications of their findings: eviction prevention is an economic and racial justice issue, access to legal counsel helps level the playing field for tenants, record sealing is essential to prevent harm and stigma and emergency assistance can prevent evictions by keeping renters out of court. “The earlier we can make these resources available to tenants and the more frequently, the better,” Rosen said.

The panel discussed the data from the report, the state of the landlord-tenant relationship and the additional challenges brought on in the midst of the COVID-19 pandemic, touching on how tenants can be best supported by the government.

“Tenants need support; we need a process that is respectful and gives dignity to these tenants, and unfortunately the court process is the opposite of that for them,” panelist Beth Mellen, of D.C.’s Legal Aid Society, said.

Christopher Murphy, vice president of government relations and community engagement at Georgetown introduced the authors by pointing to the importance of their research for the current moment, as an eviction crisis looms. “Although their research and data analysis is based on the pre-COVID-19 years, the ramifications of the pandemic have given the report and its recommendations a new urgency and significance,” he said.

Rosen and McCabe analyzed data from the court system over a five-year period between 2014 and 2018, encompassing roughly 160,000 eviction filings. According to Rosen, of the 32,000 annual filings, 10 landlords who own just 16 percent of all residential units in the District are responsible for 37 percent of eviction filings, which they often file in bulk.

The findings showed a clear link between rates of eviction and racial demographics in the city, with Wards 7 and 8 (92 percent Black residents) seeing much higher rates of eviction filings than Ward 2 (69 percent white residents). “There is a stark geographic pattern of eviction filings across D.C.. 60 percent of filings take place in Ward 7 and 8, where a vast majority of residents are people of color and the poverty rate is among the highest in the city,” McCabe said.

The report also detailed the legal process, which disadvantages renters who lack legal representation and showed the majority of evictions filed in the city come from only a handful of landlords. This concept, as McCabe and Rosen explained, is known as “serial filing,” or when landlords file multiple evictions on the same household as a tactic to pressure renters into paying their due, often for amounts below $600. The data came from court filings, which the authors noted leaves out unofficial evictions, including renters who move under pressure from eviction filings or to escape domestic violence but are not formally evicted.

“During the pandemic, landlords are using this tactic to get tenants to leave on their own without going through the formal eviction process,” Rosen said, referencing the eviction moratorium and the practice of serial filing.

Chairman of the D.C. Council Phil Mendelson addressed the steps the city has taken to combat rising housing instability. “As chairman, one of my key priorities has been to ensure safe, stable, and sustainable housing for the District’s most vulnerable residents,” he said, citing a relief effort in March. The Council has since instituted an eviction moratorium (set to expire at the beginning of next year), banned eviction notices (though landlords continue to send them to residents), and nearly doubled emergency assistance payments.

The Council also recently passed measures in line with some of the report’s recommendations, including a move to seal eviction records and prevent renters from future discrimination. These emergency measures are only in effect for 90 days upon the mayor’s signature.

According to Mellen, while the District’s tenant protections are strong, renters still face “incredible odds in the eviction and affordable housing crisis; the deck is stacked against them.” Even those with housing subsidies struggle to pay rent, and eviction both reflects and deepens these economic and racial disparities.

Other panelists agreed that the eviction legal process has issues, but some also advocated for landlords to be protected in their contracts and ability to collect rent. Ashley Haun, a lawyer at Lerch, Early & Brewer who has represented landlords in the District, took issue with some of the report’s recommendations.

“I didn’t agree that the city should focus on frustrating the eviction process for larger landlords,” she said. “Landlords who have been through the eviction process understand that when a tenant contests an eviction, it can take several months to resolve. Landlords see that to protect their position, they should file early.”

Ending up in court, however, severely disadvantages tenants, as only two percent have legal counsel upon arriving in court. The rest either represent themselves or access day-of public legal representation. On the other side, the same three law firms represent over 62 of landlords in eviction cases, bringing a wealth of experience and a concentrated effort on the part of a few law firms.

“How can we circumvent the eviction process to get to the underlying help?” asked Randi Marshall, of the Apartment and Office Building Association of Metropolitan Washington. “It’s not about trying to remove someone from their home; it’s about the authority and enforcement of a contract.” She pointed to a larger “ecosystem” around the rental and eviction process, where tenants are disconnected from the assistance they need and landlords become unable to collect rent, harming both parties.

Polly Donaldson, director of D.C.’s Department of Housing and Community Development, explained a few efforts the District has taken so far in an effort to address access to housing complications during the pandemic. The city has completed over a dozen new affordable housing projects since the state of emergency began in March, and has increased emergency rental assistance. Although Donaldson said the department was working to put a system in place to address increased need, she emphasized the need for funding from another stimulus. “The bottom line about additional federal assistance needed is absolutely critical and will be for when the surge comes once the eviction moratorium ends,” she said. “We’re putting in place a system to address that, but it’s going to need more resources.”

“One of the things we’re trying to incentivize is affordable housing providers, which is a completely different ecosystem. There are a lot of restrictions, requirements, administrative processes that don’t exist in the private market-based system,” she said. In spite of the general strength of the D.C. housing market, restrictions around affordable housing initiatives limit investment and will to take on these projects.

The panel then turned to the personal relationship between landlords and their tenants. All agreed there is too little dialogue between renters and landlords around the eviction process, but Haun alone attributed it in part to reluctance on the renters’ part. “Landlords and tenants are trying to work together, but the reality is that these balances are continuing to climb,” she said. “A lot of tenants don’t want to have this discussion until they know what they owe.”

Mellen argued the opposite is true as well. “We have seen a significant increase in tenants calling us about illegal activity from landlords during the moratorium: locking tenants out, threatening and harassing,” she said. “Sure there are landlords who are working with tenants, but there are also landlords who abuse the system.”

To Rosen, the need for dialogue comes before the problem ends up in the court system. Both Rosen and McCabe distinguished between short-term, emergency measures, and lasting solutions. “Long-term, subsidized housing is the most effective tool to combat housing instability,” Rosen said.

D.C. preps budget after ending 2020 with an unexpected surplus 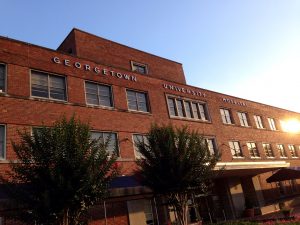