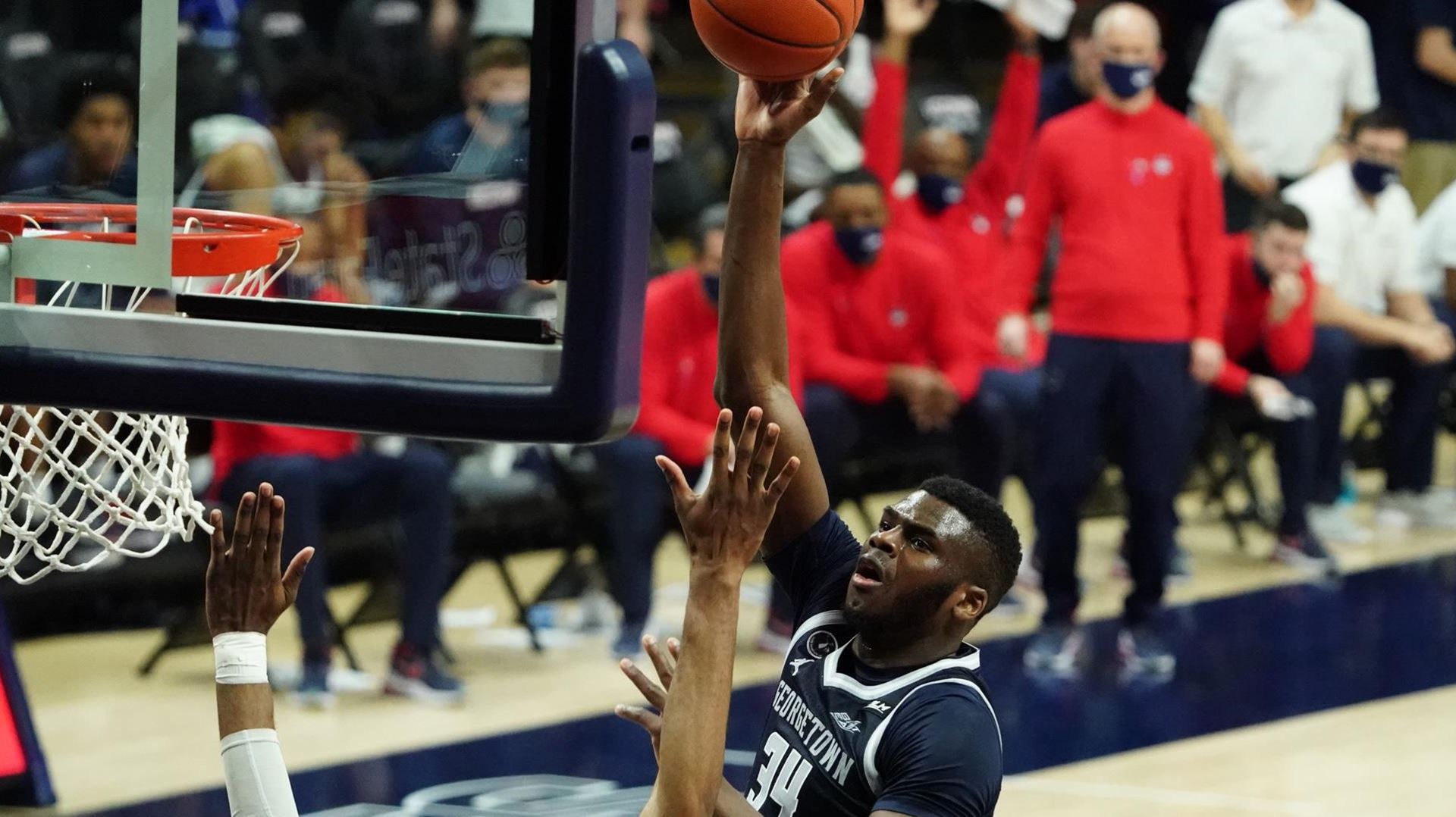 The Georgetown Hoyas men’s basketball team (9-12, 7-9 Big East) fell to the University of Connecticut Huskies (14-6, 11-6 Big East) by a score of 98-82 on Saturday afternoon at Harry A. Gampel Pavilion. Sophomore center Qudus Wahab led the Hoyas in scoring, picking up 16 points and 7 rebounds, followed by graduate forward Chudier Bile, who scored 15 points and 3 steals before fouling out late in the second half of the game. For Connecticut, sophomore guard James Bouknight led the scoring with 21 points, 3 rebounds and two assists. Senior forward Isaiah Whaley and junior guard Tyrese Martin also racked up 11 points each.

Looking to extend their win streak and shake up Big East Tournament seeding in the last game of the regular season, the Hoyas came out flat. Connecticut’s strong defense combined with Georgetown’s lack of energy and poor shot choice defined the first half of the game. The Hoyas’ slow start began with a turnover by Wahab and a barrage of missed shots that allowed Connecticut to get to a 0-9 lead in just two-and-a-half minutes of play, forcing Georgetown head coach Patrick Ewing to call a timeout.

The lack of effort in the first half did not go unnoticed by Ewing, who said, “The way we started off the game, we didn’t have the intensity and the effort that we needed to be in this ball game.”

Things did not get much better for the Hoyas coming out of the timeout, as Pickett missed a jumper that allowed Connecticut to gain possession of the ball, extending Connecticut’s lead to 0-12 after Bouknight sunk a three-pointer off of an assist by redshirt junior guard R.J. Cole. The Hoyas’ finally made their way onto the board and followed up with a layup by Pickett, bringing the score to 4-15. The Hoyas’ were able to hold Connecticut for two minutes and went on a 6-0 from the free-throw line, as Bile capitalized on two fouls he drew, bringing the score to 6-15.

Fouls remained the Hoyas’ primary method of racking up points in the first half, as Connecticut’s defense was virtually impenetrable for the Hoyas. With the score 13-26 and the Hoyas trailing, 7 of Georgetown’s 13 points were made from the free-throw line. Although Connecticut did not assign two defenders to Wahab, they were able to keep him in check due to Georgetown’s poor shot selection.

On the other hand, Connecticut’s quality shot choices during this first half allowed them to keep racking up points. Sophomore guard Jalen Gaffney exploded on offense, hitting a three-pointer and then a dunk, both assisted by Cole, to bring the score to 16-33. Connecticut continued to evade Georgetown’s defense and prevent the Hoyas from making any quality offensive plays, extending their lead to 24-51 at the half.

Reacting to his team’s selfish play in the first half, Ewing said: “At halftime, we had one assist. one. That tells you that we’re not sharing the ball. There is no way in hell you’re supposed to have one assist. The ball has to move. They did a great job of being up in the passing lane, but the ball has to move, you can’t stick.”

The Hoyas came out of the locker room with more energy and better shot selection, but still struggled to control Connecticut’s offense. Whaley opened up the half with an easy layup, but quickly returned to the bench after receiving his fourth foul of the game after a run-in with Bile, who subsequently made a layup. Bile’s layup was answered by a dunk from Martin off a solid pass by freshman forward Adama Sanogo, bringing the score to 26-55. Georgetown began to gain steam, going on a 7-0 run that saw a dunk by Wahab off of a pass from Pickett. The run quickly ended after just one minute with a jumper from Martin and the score at 33-57.

Although still trailing significantly, Georgetown was able to get more shot opportunities thanks to unselfish ball movement. By moving the ball around, the Hoyas’ shot selection also improved, allowing them to sink buckets rather than rely on the free-throw line to get points. Assisted by Harris, Blair and Bile were able to find cracks in Connecticut’s defense, allowing them to get open and sink some much-needed three-point shots to shift the energy toward Georgetown.  A technical foul on Bile ended this shift in momentum, leaving Georgetown to continue to chip away at their 54-72 deficit.

With 5:35 left to play in the second half, Bile fouled out of the game, making the task of holding Connecticut’s offense more difficult. Bile’s exit led freshman forward Kobe Clark to take his place. Connecticut’s double-teaming of Blair left Clark open, allowing him to make a layup and collect his fourth point of the year, bringing the score to 62-81. Although they fought hard until the end, Georgetown’s defense ultimately could not hold Connecticut, allowing the Huskies to pounce on the Hoyas, 98-82.

This was a disappointing loss for the Hoyas, as a win would have given them a slim chance at a first-round bye in the Big East Tournament. On his team’s play this afternoon, Ewing remarked, “they started out kicking our butts, I mean, we were down 20 points early and there have been games where we start off slow but we were able to work our way back into the game.”

The Hoyas will head to the first round of the Big East Tournament, starting on March 10 and extending through March 13 at Madison Square Garden. For continued coverage of the men’s basketball team and all Georgetown sports, follow @GUVoiceSports on Twitter.