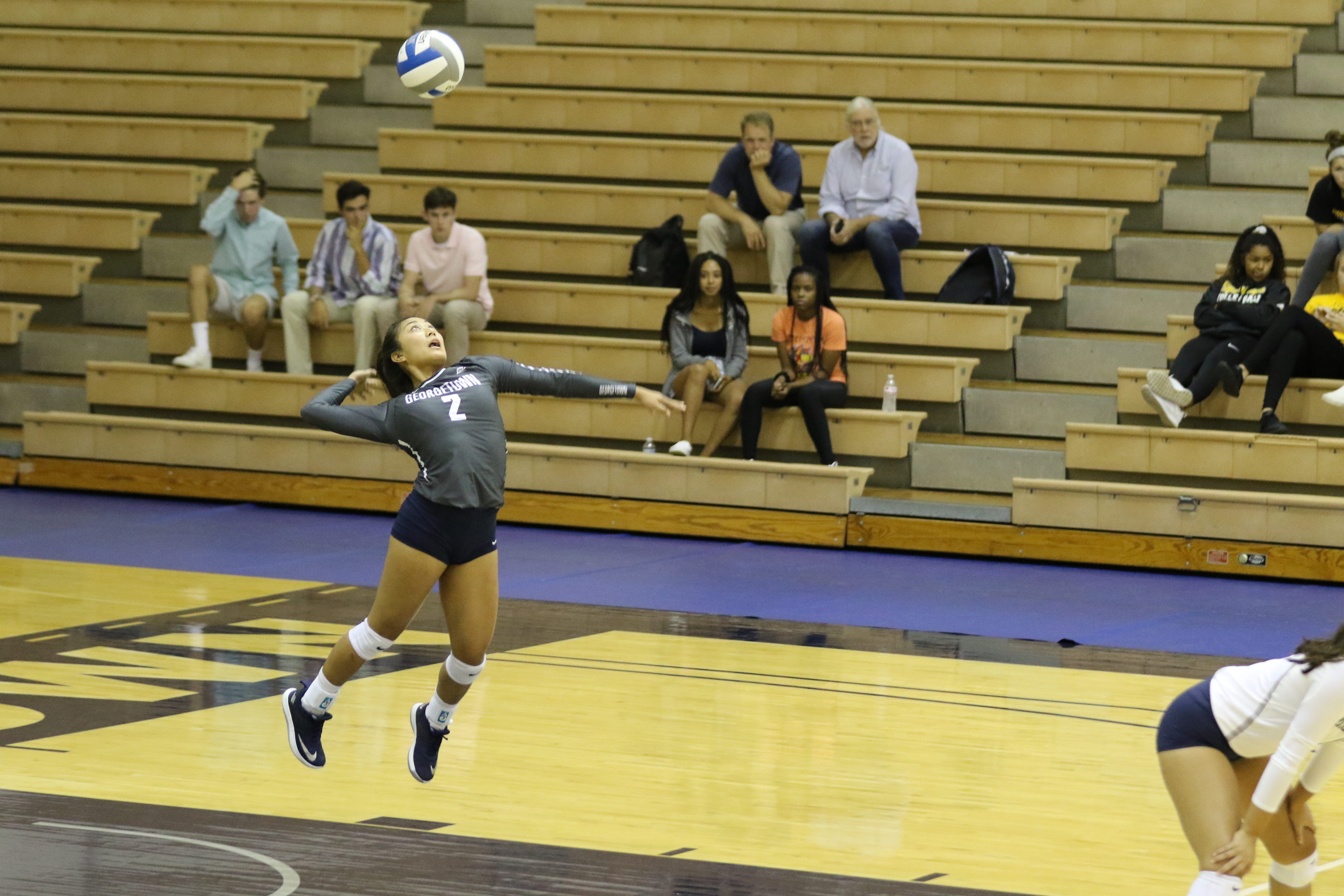 “Tonight it felt really, really great to finally close it out and beat a really solid team,” Head Coach David Heller said after the game.

The first set started with neither team able to score more than twice in a row until the Huskies broke through the back and forth with a quick 3-0 run. This gave UConn a 12-9 lead that it wouldn’t relinquish for the rest of the set. The Huskies eventually won the first by a score of 25-21 with the Hoyas unable to come within two points of UConn.

Egged on by chants of “Let’s Go Hoyas” by the student section crowd at McDonough, the Hoyas broke out to an early 7-3 lead in the second set, with senior libero Jessica Cusi having an ace serve in the run along with a couple of digs. However, UConn was able to battle back and retake a 9-8 lead, forcing a Hoya timeout. Freshman libero Karis Park subbed in and had two service aces as Georgetown retook a 12-9 advantage. Freshman outside hitter Giselle Williams continued the aces for the Hoyas with Georgetown clinching the second set by a final score of 25-20, evening the match at one apiece. Cusi finished the second set with six digs – eventually finishing the match with 23 digs.

“It’s really a testament to the amount of hard work that this team puts in every day,” Heller remarked. “They don’t take a practice off, they don’t take a match off, they go into it with the intention of winning and playing well.”

Georgetown fell down 4-0 in the first set, prompting them to call a timeout. “We talked about controlling our side of the net,” said Heller. “I think that it really was just a visual and mental reset.”

Shortly after returning from the timeout, the Hoyas proceeded to rip off a 12-2 run to take a commanding 13-8 lead. Cusi and junior libero Kelly Chen sparked this run as both made key digs and had streaks of five straight serves. Another 5-1 run by the Hoyas secured them a commanding lead and ultimately gave them a 25-18 set win.

Although they had momentum on their side, Georgetown got off to another slow start in set four. Junior Peyton Wilhite began a momentum shift with a vicious spike from the right side. Georgetown was able to eventually take an 8-7 lead with a beautiful kill from middle blocker Brennan Wilhite, but UConn responded with a 5-0 run to take a 12-9 lead. Williams subbed back in and stopped the bleeding with a spike of her own. This re-energized the Hoyas as Cusi and Chen anchored the back line and led Georgetown on a comeback to knot up the back-and-forth game (the fourth set had 12 ties and five lead changes) at 24 apiece.

Things started to get tense as Georgetown sought to break its losing streak and it appeared as if the match was headed to a fifth set as UConn took a 25-24 advantage. The Hoyas would not quit and knotted it back up at 25 all. Then 26 all. Then 27 all. On a long rally between the Hoyas and Huskies, Cusi came up with yet another clutch dig, leading to a strong spike by Williams into the back left corner of the court. Down one, the Huskies needed to tie things up in order to have a chance to send the match to the fifth and final set. But with a good serve by Williams and a small rally, UConn could not keep their return in bounds, giving Georgetown a 29-27 win in the set and their first victory since Sept. 10.

“They started to have fun,” Heller said of his squad. “It definitely feels like a reward for all of the hard work this team has put in.”

Heller also made sure to note postgame that senior captain Cusi had recorded her 1000th career dig, a significant milestone in Cusi’s career that puts her in company with only 11 other players in program history. “She’s an anchor for this team in every sense of the word. We are incredibly lucky to have [Cusi] on our side of the net,” Heller said. “She means the world to this program.”

Cusi recorded 23 digs along the backline with Peyton Wilhite recording 15 kills (along with 17 digs) to lead the offense. Junior setter Emma Plutnicki chipped in with 43 assists, providing needed steadiness and for the offense. Williams also added 11 kills and 18 digs.

The Hoyas will return to action Friday, Oct. 15 at Xavier and will look to build on the momentum they gained vs UConn. For continued coverage of all Georgetown sports, follow @GUVoiceSports on Twitter.