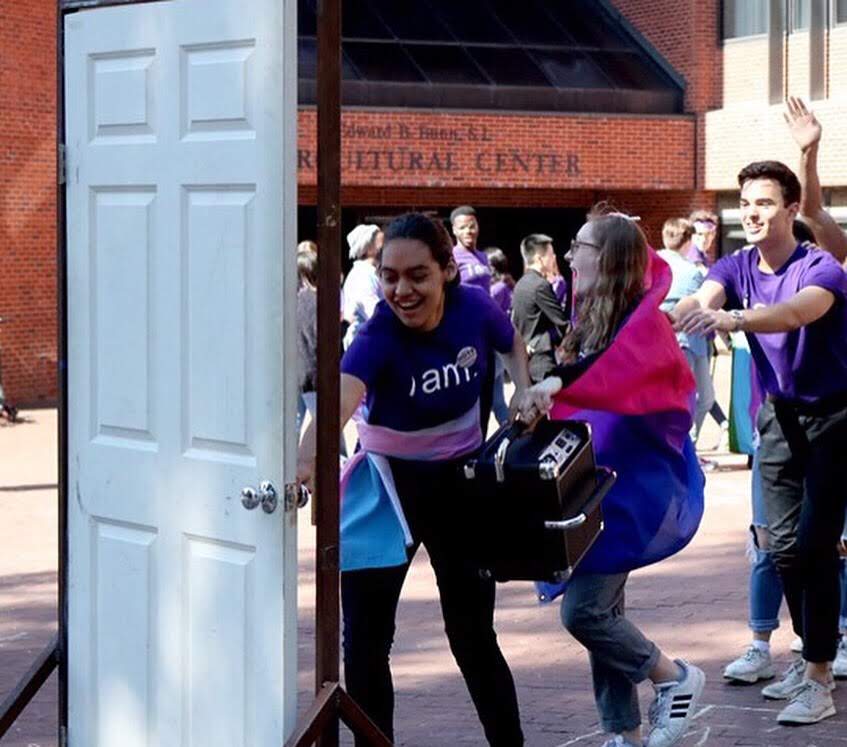 Students celebrate Coming Out Day in Red Square in 2019. Courtesy of GUPride

In a cheerful celebration in Red Square, LGBTQ students and allies took part in a Coming Out Day event as part of this year’s OUTober festivities, hosted by GU Pride and GU Queer People of Color. Students walked through a doorframe to signify their coming out as a member of the LGBTQ community.

Coming Out Day is a national event that began in 1988 to celebrate the act of LGBTQ people disclosing their sexual orientation and gender identity to others. Though Coming Out Day occurred nationally on Oct. 11, Georgetown students planned their event for Oct. 13 to honor Indigenous Peoples’ Day, which also occurred on Oct. 11 this year.

Students decorated Red Square with chalk, and as a crowd began to form, GU Pride and GU Queer People of Color leadership discussed the significance of coming out in the LGBTQ community, especially here at Georgetown.

Students walked through the door one by one, wearing shirts that read “I am.” Participants wear a shirt with this phrase every year, and each year the shirts’ color cycles through a different shade of the rainbow. This year, they used light pink to match the pink in the transgender pride flag.

“It’s ‘I am.’ with a full stop,” Elisabeth Koch (SFS ’24), a co-president of GU Pride, said. “I see people wearing past editions of the t-shirts quite often, and it’s just a symbol of pride and a way to remind the faculty and everyone at Georgetown that queer people exist.”

Koch explained that Coming Out Day could not have been put together by one group alone. In addition to GU Pride and GU Queer People of Color’s planning efforts, the President’s Office funded the shirts, the Department of Performing Arts provided the door, and the LGBTQ Resource Center sponsored the event. “It’s a joint effort and we’re all very happy to be able to have the event so regularly,” Koch said.

While the university currently recognizes LGBTQ groups on campus, such support did not come on its own, but as a product of many decades of student activism. For instance, the LGBTQ Resource Center was created in 2008 by President John DeGioia following a student campaign responding to multiple hate crimes against LGBTQ students.

“Given the fight that had to happen for LGBTQ spaces to be established on campus and the issues that we struggle with such as housing and getting pronouns normalized and holding professors accountable, when we can have a space such as this to celebrate that even through all these obstacles we’re able to persevere, it’s so important,” Kat Lytkowski (SFS ’24), GU Pride’s director of advocacy, said.

The progress LGBTQ students have made on campus is evident in another main focus of the Coming Out Day event—the group photo taken on the front steps of Healy Hall. The photo represents the ability for students to be out and visible as members of the LGBTQ community in one of the most identifiable spots on the university’s campus, Lytkowski said.

“Given where pride started and where pride has come, I think not only is it more prevalent but what it looks like has changed a lot. Being able to have those photos and being able to be a part of that community felt really personal to me,” she added.

The Coming Out Day event was just one in a series of plans for this year’s OUTober celebration. Other events include a group meditation and a production of The Rocky Horror Picture Show. In the future, GU Pride plans to host more events relating to a variety of aspects important to the LGBTQ community at Georgetown.

“We’re planning a panel that is going to focus on the intersectionality between LGBTQ+ identity and people of color,” Koch said. “We hope that as many students will be able to attend because this is a topic that’s so important and often ignored in the queer community.”

Koch explained that GU Pride aims to have a mixture of both serious and fun events to celebrate and bring awareness to the LGBTQ community. For all of them, both LGBTQ students and allies are welcome to attend. 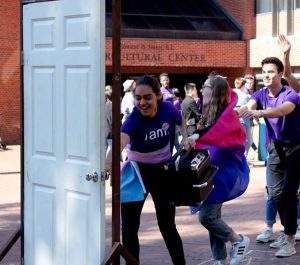