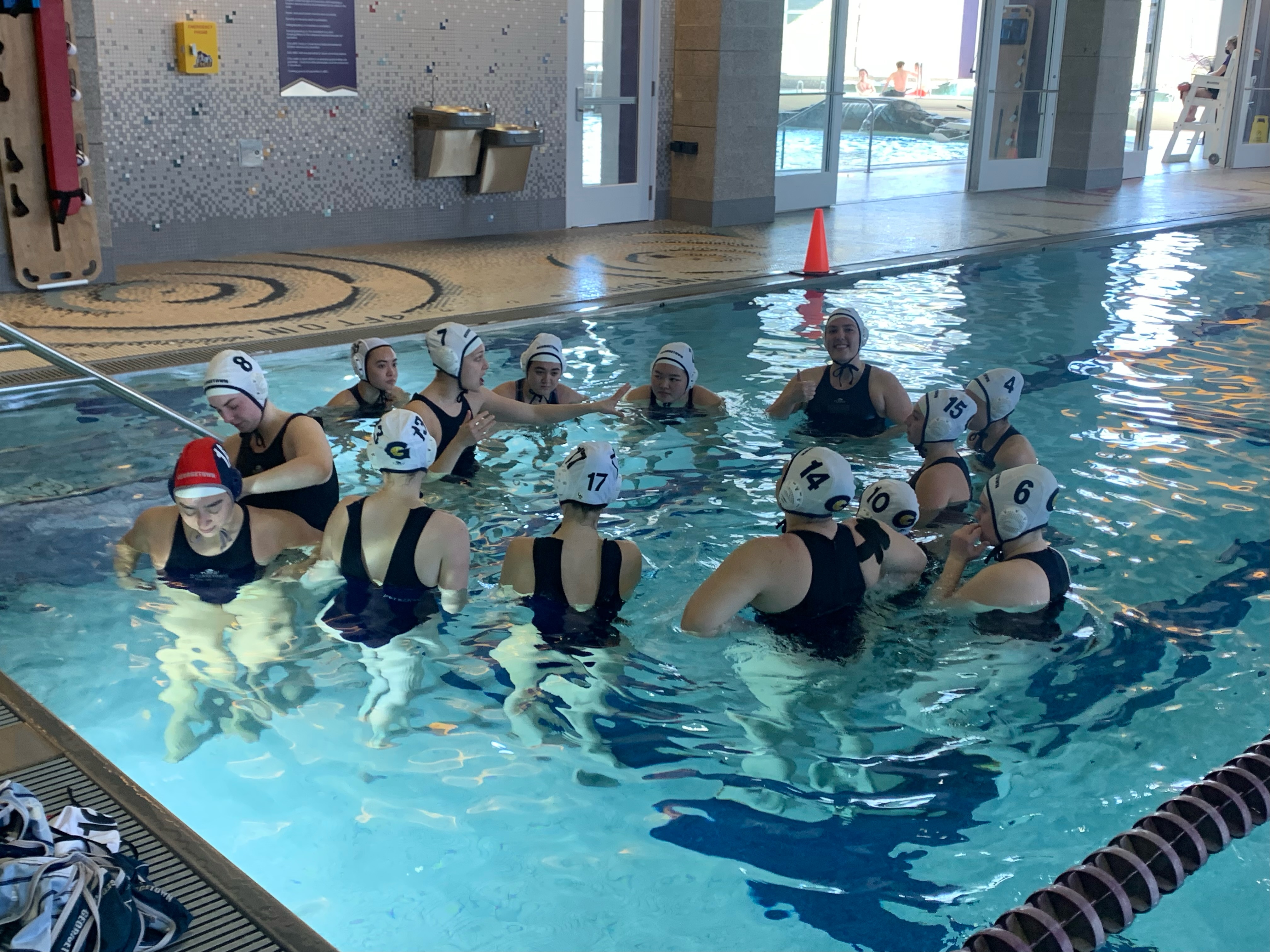 Going into the last day of their tournament at James Madison University on Feb. 20, Georgetown women’s club water polo was not expecting much going up against the powerhouse Virginia Tech. The women’s team is often overlooked as an all-female club team without a full-length pool to practice in or host tournaments on campus, but its growing membership and yearly improvement are making it a force to be reckoned with.

Despite their weak legs, the Hoyas played through the pain and put up a strong fight against the Hokies, keeping the game consistently close up until the very end. With just a few minutes left and the score tied at seven, Georgetown committed a foul worthy of a penalty shot.

Senior goaltender Rachel Cherelstein shuddered when she saw who she was up against for this pivotal moment in the match. It was one of Virginia Tech’s best scorers, Emily Robinson, who Cherelstein had yet to block all day. As Robinson lined up on the five-meter line of the pool to take her penalty shot, Cherelstein looked down at her from the goal and could tell that despite her scoring prowess, the two girls were equally nervous.

When the whistle blew, Cherelstein propelled her legs in quick circles—like an egg beater—to block a shot. “As a goalie, your biggest thing is to try and make your shot as limited as possible and make myself as large as I can,” Cherelstein said. It worked—Robinson released the ball with the intention of getting just over Cherelstein’s head and clinching the score, but missed, keeping the Hoyas in the game.

Just a few minutes later, the Hoyas scored the winning goal, beating Virginia Tech 8-7 and securing the number two seed for this April’s Atlantic Division Championship Tournament. “We played the best defense as a team that we’ve ever played and we had several different players contribute to scoring,” co-captain Paige Curcio said. “I overall feel like we found our groove in terms of our team strategy and how we could maximize the roles of individual members.”

“We never expected to go into our regional championship seeded second; we always thought, ‘Oh, let’s go for third,’” Cherelstein said. “But the fact that we’re second is amazing, and we actually think we can kind of give UVA a run for their money.” The University of Virginia is seeded No. 1 and is the only team in the Atlantic Division of the Collegiate Water Polo Association that the Hoyas have lost to this season, ending the regular season with a 7-1 record across both tournaments.

When Cherelstein joined the women’s water polo team four years ago, the team was small, consisting of just one senior leader and five or six new freshmen. “We had, like, no subs and we were only an exhibition team, so we didn’t pay our full league dues and we didn’t have a chance of going to Nationals,” Cherelstein said. The club lost every game they played that year.

But by Cherelstein’s second year on the team, they had amassed enough players and skill to win half of their games. They only played in one tournament that year since the season was cut short due to the pandemic. “Just between my freshman and sophomore years, we went from not winning a single game to winning two of the four games we played during my sophomore year,” Curcio added. “I knew that we were improving and had the potential to be a real threat in the competition this year.”

Returning to campus in the fall of 2021, the Hoyas threw all their effort into recruitment. “I knew if we had the chance to grow our membership and skills that we had the potential to be strong competitors in our league,” Curcio said.

Although they now have enough women for subs, the team still has two major challenges to overcome: no coach and no full-sized pool for practices. Club sports at Georgetown are allowed to retain coaches for their teams, but they are not paid for their time. Women’s water polo previously had two volunteer coaches, but they have since moved away, leaving the players to coach themselves. The only other team in the Atlantic Division without a coach is the University of Maryland, whose women’s club team debuted this year after amassing enough women to split off from the men’s team.

Both the women’s and men’s water polo teams are given three one-hour practice slots per week but are confined to practicing in the diving well. While they are grateful for the space on campus, the diving well is approximately half as long as a 25-meter, full-sized swimming pool, meaning  the Hoyas cannot scrimmage or run drills that simulate accurate game scenarios.

The University did say that the women could look into other facilities for practices, namely George Washington University’s Lerner Health and Wellness Center, but the team worried they would lose players because of the extra commitment to travel off-campus for practice. “Now it might be more feasible, but in the past, we were so concerned because we only had a few girls anyway and we wanted there to be the least number of barriers possible to come to practice,” Cherelstein said. “Perhaps it’s something to think about for the future.”

Without a full-sized pool on campus, Hoyas also have no home base. “We can’t host tournaments here because we don’t have the facilities for it,” Cherelstein said. With no host and tournaments hours away, the Hoyas have no fan section to cheer for them. “It’s a big ask to ask people to travel to watch a club sport, so that’ll definitely be a challenge [for the UVA game].”

While they have been able to make do with the cheers from the bench, looking ahead to April, defeating UVA will definitely be the biggest test all season long. “They’ve always been first,” Cherelstein said. “No one has ever beat UVA, but this is definitely the most hope we’ve ever had.”

Georgetown Rugby is winning like hell. Where’s their school support?