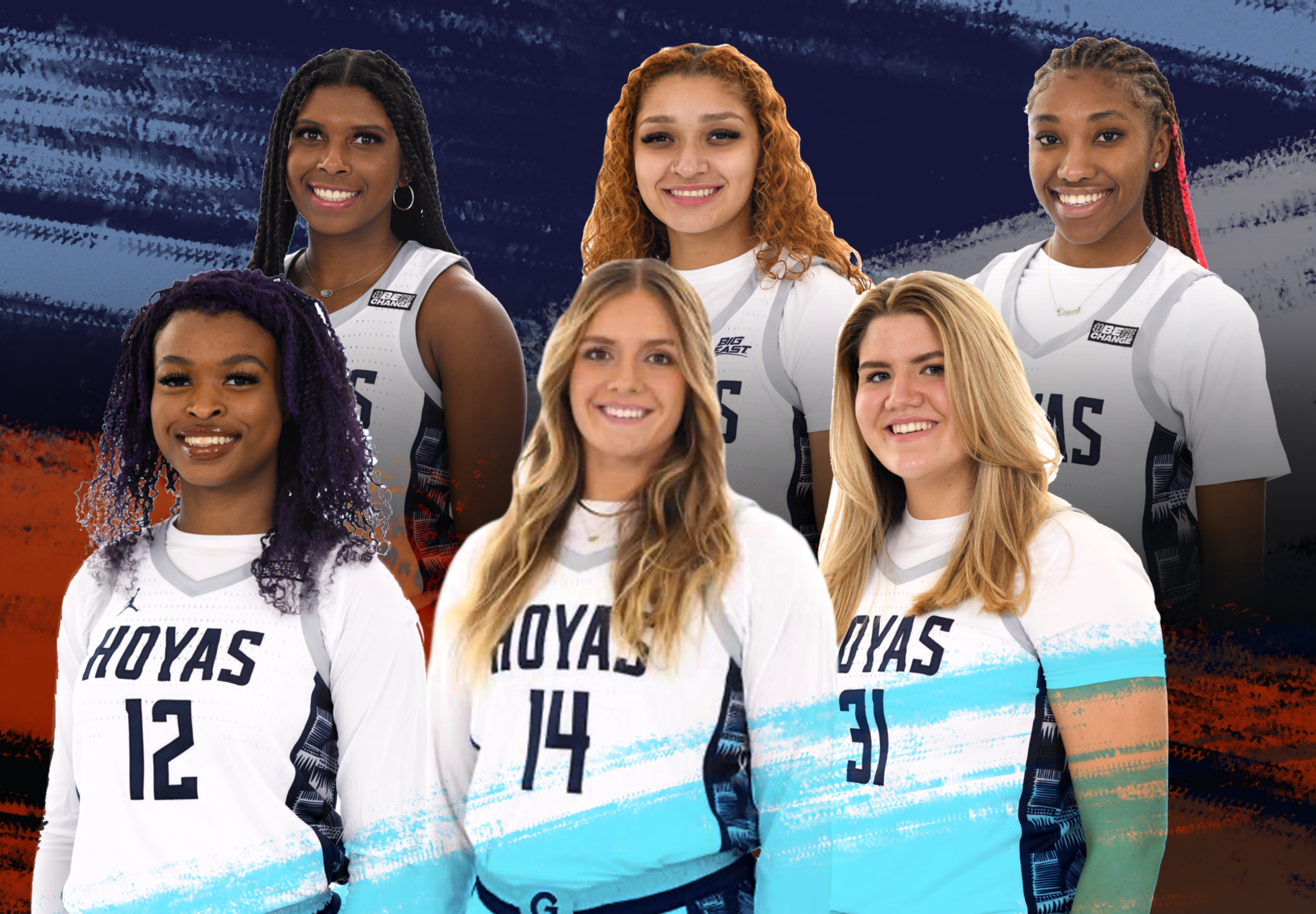 Jada Claude, the senior transfer from Morehead State, is a slashing wing who averaged 13.6 ppg and 7.1 rpg last year. Claude has had an interesting collegiate journey to this point—starting her career as a bench player on a good Duke team for a couple of years before flourishing at Morehead State in a larger role—but she returns to D.C. (her birthplace) as a very important piece to this Hoya team, if she can keep up her pace from last year. On top of her slashing, Claude is a stout defender on the wing who isn’t afraid to crash the boards and do the dirty work inside. Expect Claude to play a major role for Georgetown this year.

Georgetown’s highest-ranking freshman (124th by BlueStar, 75th by ESPN), Kennedy Fauntleroy profiles as a quick and shifty ball-handler with innate ability to knife through the teeth of the defense for easy shots at the rim or kick-out opportunities. A local recruit—hailing from New Hope Academy in Upper Marlboro, MD—Fauntleroy averaged 16.4 ppg, 4.7 apg, 4.5 rpg, and 3.8 steals per game her junior year en route to winning the Insider Exposure National Championship in 2020, and followed her championship run up by taking home MaxPreps Maryland Player of the Year the next season. Fauntleroy also utilizes a quick release on her jumper, both in the mid-range and extending out to three, which makes her a true three-level scorer in addition to having excellent ball-handling and passing chops. Fauntleroy will be a player to watch this season as a true X-factor, depending on how quickly she adjusts to college ball.

Morgan Lee is the only new center for the Hoyas, but along with standing at 6’5” and being a great rim protector and shot blocker, Lee is a fantastic passer for her position and also has the ability to stretch out to the 3-point line. Coming from Kent School in Kent, Conn., Lee ranked as the 142nd recruit in the incoming freshman class after being named team MVP twice and averaging 20.4 ppg and 12.4 rpg as a sophomore. For the Hoyas, Lee should provide good depth for the frontcourt with intriguing upside as a big who can run the offense at the high post with cutters and shooters around her. Without many centers on the roster after graduating Shanniah Wright, Lee should get decent minutes from day one and could play a major role for Georgetown starting now.

Modesti McConnell, ranked 166 in the incoming freshman class, accrued a splendid high school record at Casady School in Edmond, Okla., dropping 39 points in her first game as a freshman, blossoming into district MVP her sophomore year, and captaining the team her senior year. McConnell’s calling card is her deep 3-point range with plenty of shiftiness to create space out on the perimeter to open herself up for shots from beyond the arc. With her lethal shooting from the outside, McConnell is able to leverage that gravity to open up easy shots inside for herself and her teammates. For Georgetown, McConnell should give Head Coach James Howard a knockdown shooter off the bench any time the Hoyas need the court to open up.

As the  second of Georgetown’s two transfer additions, Kristina Moore comes over from the University of Florida for her graduate year. The Australian guard started 75 games across four seasons at Florida as a shooting guard despite having her freshman year cut short due to injury. Being on a high-quality SEC team, Moore wasn’t asked to do much besides play a supporting role as a rebounder and defender, but she’s been a durable glue player for her whole career and has begun to show some shooting promise as a potential spot-up threat. Can she leap into a  larger offensive role on the Hilltop? We’ll see, but she brings leadership as well as both SEC and international experience to the Hoyas, and should prove to be an invaluable member of the team during her graduate year.

Freshman Victoria Rivera hails from Dobie High School in Pasadena, Texas, where she started all four years on varsity and led her Longhorns squad to an undefeated season in their district. Listed at 6’0” and with good hands and defensive awareness—she had multiple games her senior year with four or more steals—Rivera profiles as a stout defender with the potential to guard one through three. The VYPE Magazine Player of the Year and district MVP, she also showed plenty of scoring prowess with a quick jumper and the ability to extend out to the 3-point arc. Despite being an unranked recruit, Rivera figures to be a floor-spacer off the bench for the Hoyas with plenty of potential as a three-and-D player down the line.