“I’m not a monster, I’m a mother”: Making villains of superhero women 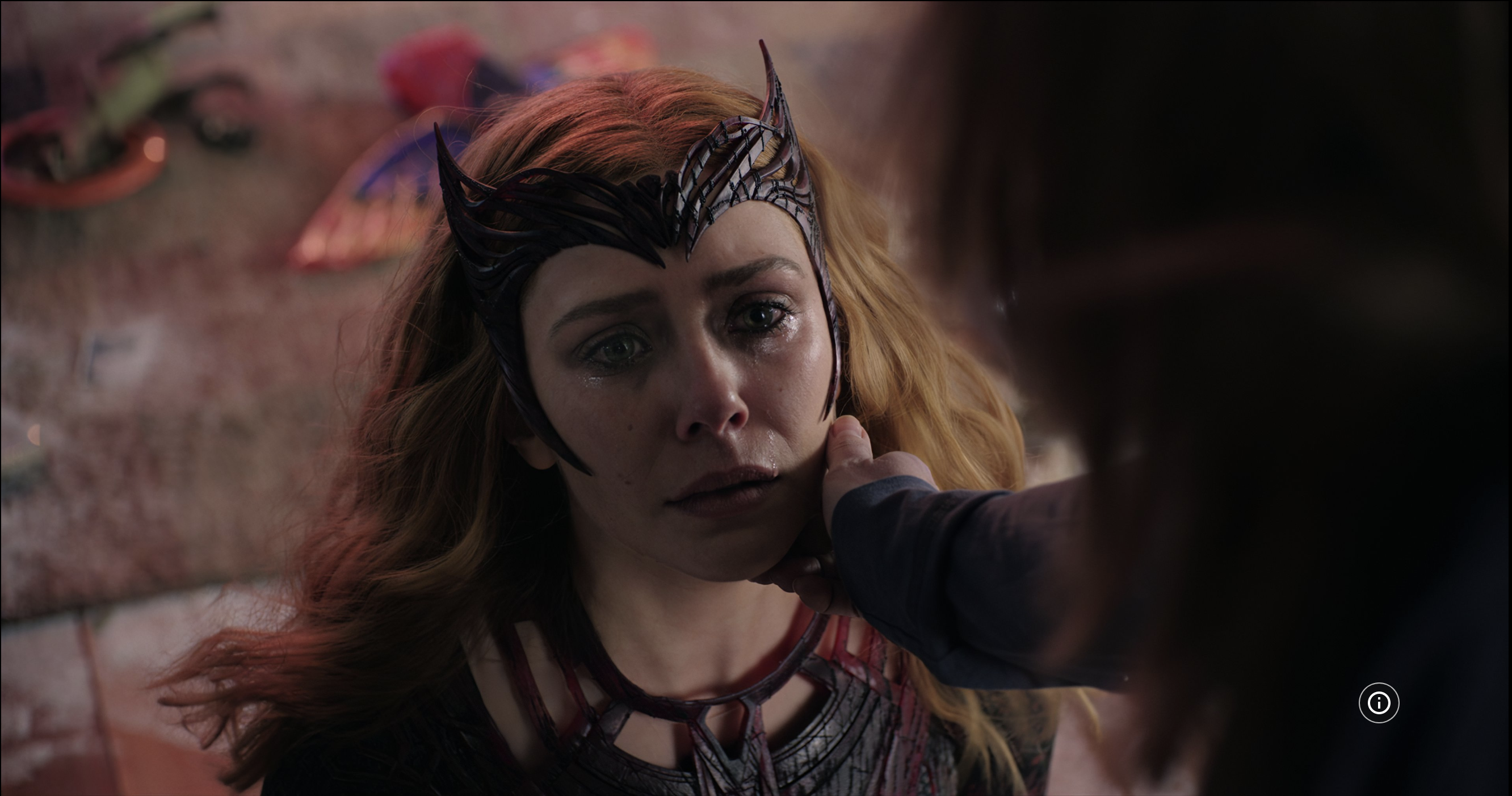 Sam Raimi did Wanda Maximoff dirty. His early summer entrance into the MCU with Doctor Strange in the Multiverse of Madness (2022) ignored a season’s worth of character development written for Wanda in WandaVision, the acclaimed Disney+ TV series that launched in early 2021. It’s painfully clear that Raimi did not watch WandaVision in preparation for his film, choosing to dedicate more attention to campy horror effects than the substance of her character. Granted, this is a film about Dr. Strange, but viewers were ready to see Wanda as a leading character because of her deeply emotional arc in WandaVision. Even if the image of a barefoot, oil-covered Wanda limping toward the camera on her alternate-universe murder spree is an affective monster-movie visual, it unwittingly reveals Raimi’s understanding of her as mechanic and malfunctioning –– not human.

In Multiverse of Madness, Wanda’s villain arc picks up where WandaVision ends. According to the film, Wanda attempts to disrupt reality and kill a child (Xochitl Gomez’s dimension-hopping America Chavez) because of her immense grief at losing her children at the end of the show. Yet this arc doesn’t square with the resolution of WandaVision, which sees the deeply traumatized heroine resign herself to living in her own reality, however painful that might be. She gives up her children of her own volition, demonstrating a willingness to put the peace of a town above her own desires for a nuclear family. Raimi’s take on the character erases all of that development, opting to turn Wanda into an easy-made villain whose pain and madness is the most important part of her character. His reconfiguration of Wanda as a traumatized villain eschews all of the nuance that WandaVision gave her, and erases the steps she had taken towards healing in that show.

Wanda isn’t the only female superhero to receive the mother-madness-monster treatment this year. In the Umbrella Academy’s third season, the show’s sole female protagonist Allison Hargreeves gets a similar makeover. Despite being a fan favorite in the preceding season, in which the superpowered siblings time jump into the 1960s, season three sees Allison sabotage her siblings, motivated solely by her grief in losing her daughter. Like Wanda, Allison’s grief over losing her child transforms from madness to violence, as she kills ruthlessly and nearly causes the destruction of reality.

The message in both of these cases seems to be that maternal grief is lethal and can literally cause the world to end. The loss of a child is traumatic, no doubt, but the decision to channel that trauma into madness and violence constitutes what is only a reincarnation of traditional narratives about female hysteria. The fact that these women are superheroes, and therefore possess powers that already make them formidable, renders their treatment as villains strikingly similar to the supernaturally powered witches that terrified seventeenth century Americans. Though these witches didn’t possess real superpowers, they were vilified as threats to the order of the community, enemies who needed to be hunted because they could not be controlled. Like these witches and other mad women who preceded them, Wanda and Allison were remade to realize an anxiety about women in positions of power, especially women who cannot conform to traditional gender formulations of wife and mother because of their losses. Both lose children, both lose husbands, and as a result, they present immediate threats to the white male superheroes they’re supposed to support.

Allison’s arc is actually made worse by the implied sexual assault her character commits against Luther, one of the aforementioned male superheroes. The attempt is not only out of character for a woman who demonstrated only lukewarm interest in Luther in season one and was deeply in love with her own husband in season two; it also demonstrates a major blindspot by the show’s writers when it comes to considerations of race. The show fails to consider the racial subtext of writing the show’s one Black female protagonist to force herself on a white male love interest who is already in a committed relationship with a white woman. This dynamic in The Umbrella Academy becomes an uneasy rendition of an old anti-Black narrative of excessive promiscuity of Black women towards married white men, which has existed since enslavement to justify the regular sexual assault of Black women by white men. That narrative was also constructed out of a systemically-imposed inability of Black women to conform to traditional definitions of good motherhood –– because they were initially barred from legal marriage and because their children could be taken from them as chattel during enslavement, they were imagined as deviant mothers whose supposed promiscuity became related to this failed motherhood. Allison’s implied assault in season 3 of The Umbrella Academy therefore ties her failed motherhood to aggressive promiscuity towards Luther, and it cannot be divorced from the racist subtext that positions Black women as a threat to white heterosexual relationships.

The problem with these stories, with Allison’s and Wanda’s, is that they don’t complicate our cultural understandings of motherhood. If anything, they demonstrate a dominant perception of the mother-identity, which is hardly an identity in itself –– we expect mothers to exist solely for the raising of children, to devote themselves wholly to their children, and to be without purpose when these children are lost. There is no space for complicated feelings toward children that are not loving or self-abnegating. And when maternal trauma for superheroes manifests as world-threatening violence, the message is that women in power are more volatile and more deadly when they cannot conform to the roles of wife and mother –– and that their power can only be checked by their male counterparts.

Amanda Yen
Amanda is a senior American Studies major. Her villain origin story is that she was told she has “only child vibes.”