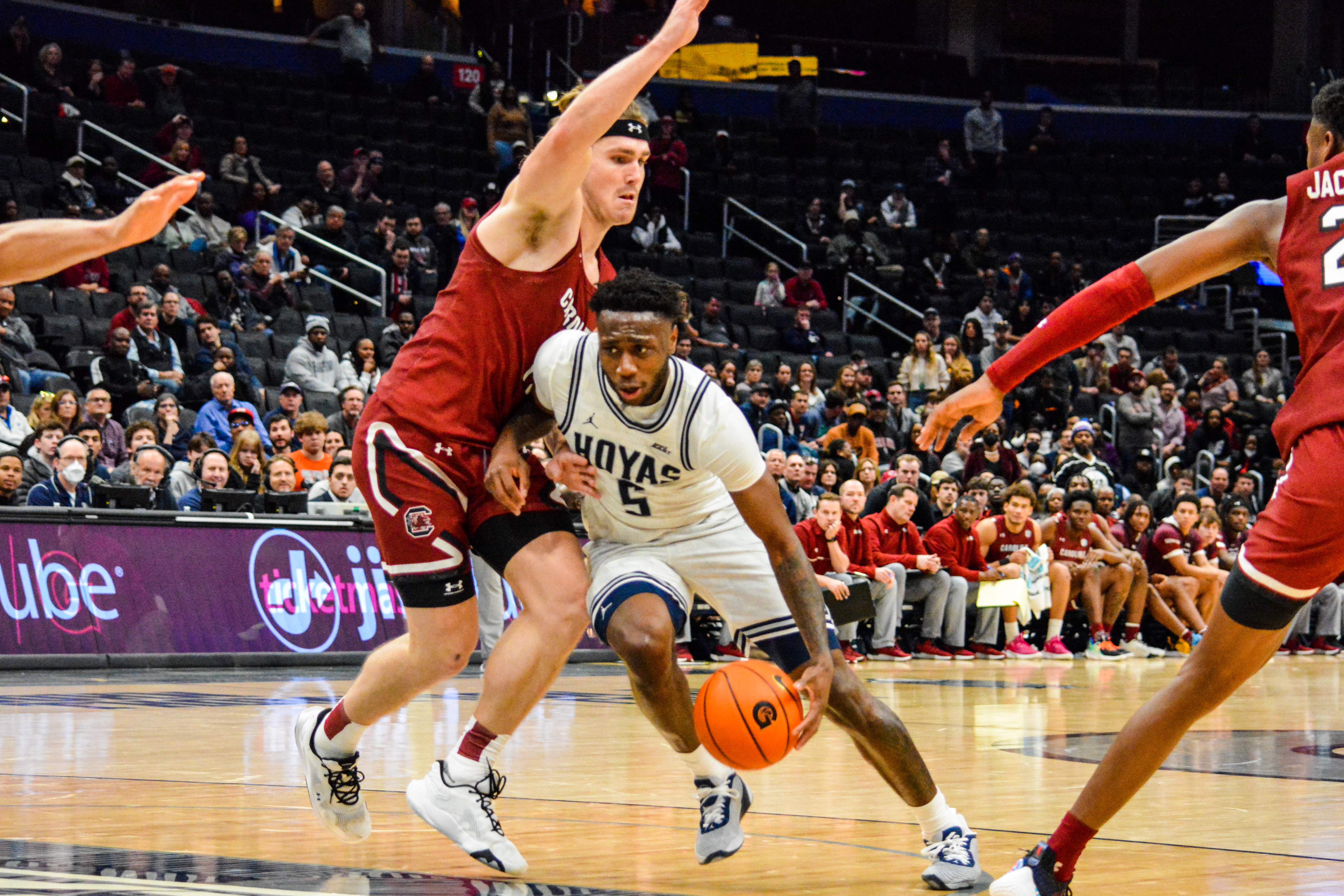 The six-point favorite Georgetown Hoyas (4-5, Big East) fell 74-71 in overtime to the South Carolina Gamecocks (4-4, SEC). Once again, the Hoyas’ inability to defend the three led to their downfall. South Carolina shot 10 of 31 from behind the arc, as compared to Georgetown’s 3 of 18.

It was an even game in the beginning, with both teams struggling to gain offensive momentum. The Gamecocks outworked the Hoyas on defense, doubling and sometimes tripling senior center Qudus Wahab whenever he got the ball in the paint. The first points of the game didn’t come till nearly two minutes in, courtesy of a pair of made free throws by junior guard Jay Heath.

As the first half went on, Georgetown’s ball movement improved and South Carolina’s defensive pressure waned. But a pair of threes for the Gamecocks prevented the Hoyas from pulling ahead by more than a few points. It wasn’t until sophomore forward Bradley Ezewiro subbed in that Georgetown truly began to separate.

Ezewiro was dominant in the post, racking up all six of his points on the night along with a steal over a five-minute span to put the Hoyas up 20-14. With a Brandon Murray free throw and a personal 6-2 run for Primo Spears, Georgetown should have been primed to put the Gamecocks away for good, but a pair of poorly defended three-pointers and a two-point jumper for South Carolina made over the same span brought the score to 27-22, Hoyas.

Towards the end of the half, Georgetown started to get a bit sloppy with rushed passes, a couple of bad shots at the end of the shot clock, and one actual shot clock violation. With less than a minute left, sophomore guard Murray hit the deck hard after a foul and was subsequently sent straight to the locker room. Despite the clunky offense and occasional defensive lapses, the Hoyas ended the first half up 37-26.

You would think that it would be difficult to blow an 11-point halftime lead. But then again, I also thought that Jagan Mosely would handily win the halftime alumni shootout. And much like the Hoyas, he ended up tying because he couldn’t make a three.

The Gamecocks started off strong in the second half, with six unanswered points before Heath knocked down a jumper to make it 39-32. The scoring went back-and-forth for a while, the Hoyas unable to pull away by more than eleven and the Gamecocks unable to cut it to closer than five.

With a little over ten minutes to play, Carolina freshman forward Gregory “GG” Jackson II made a layup to bring the game to 52-49, Hoyas. With Jackson pouring in bucket after bucket in the second half and Georgetown’s continued inability to guard the three-point line, the Gamecocks were able to take the lead 62-61 with just over three minutes remaining.

South Carolina managed to barely hold onto their lead, and were up 64-63 with a minute to play. Spears fouled junior guard Meechie Johnson with 24 seconds on the clock, but fortunately for the Hoyas, Johnson missed his free throw and Heath grabbed the defensive board, and Spears was able to hit a two-point jumper to give Georgetown a one-point lead. With just five seconds left, all the Hoyas had to do was play a few seconds of tough defense without fouling. Then a controversial flagrant foul was called on Heath. The Gamecocks’ graduate forward Hayden Brown made the first free throw to tie the game at and missed the second. Jackson II missed a jumper to send the game into overtime tied at 65 apiece.

Overtime was back and forth, and a pair of made free throws from Heath with under a minute left knotted things at 71. With 25 seconds left, Johnson drilled a three-pointer. The Hoyas couldn’t respond, and the ‘Cocks escaped Capital One Arena with a come-from-behind 74-71 win.

Despite the gut-wrenching result, there were a few silver linings for the now sub .500 Hoyas. It was a solid game for Heath, who led Georgetown in scoring with 23 points. He was followed by Spears, who finished with 18. As for South Carolina, Jackson II led the Gamecocks with 22, all coming after halftime; followed by Johnson who scored 17, 12 of which came from three-pointers; and Brown with 16 on three made three-pointers.

The biggest takeaway for the Hoyas is that they need to defend beyond the arc much, much better. They have a tendency to unnecessarily double in the post, leaving players open for easy threes only one pass away. There’s also room for improvement in terms of substitutions–Ezewiro was dominant down low, grabbing three rebounds and putting up six points in just ten minutes of play. However, Ewing subbed him out soon after he started scoring. The same thing happened to Spears, who was subbed out only a minute after his own scoring run. If they plan on winning any conference games, Georgetown’s coaching staff needs to let guys who are playing well stay in the game.

The Georgetown Hoyas will face Siena (5-3, MAAC) at Capital One Arena on Wednesday, Dec. 7. Tip-off is scheduled for 6:30 p.m. and the game will be broadcast live on FS2. For continued coverage of all Georgetown sports, follow @GUVoiceSports on Twitter.

Five more months of hope: The story of the 2007 Georgetown basketball team