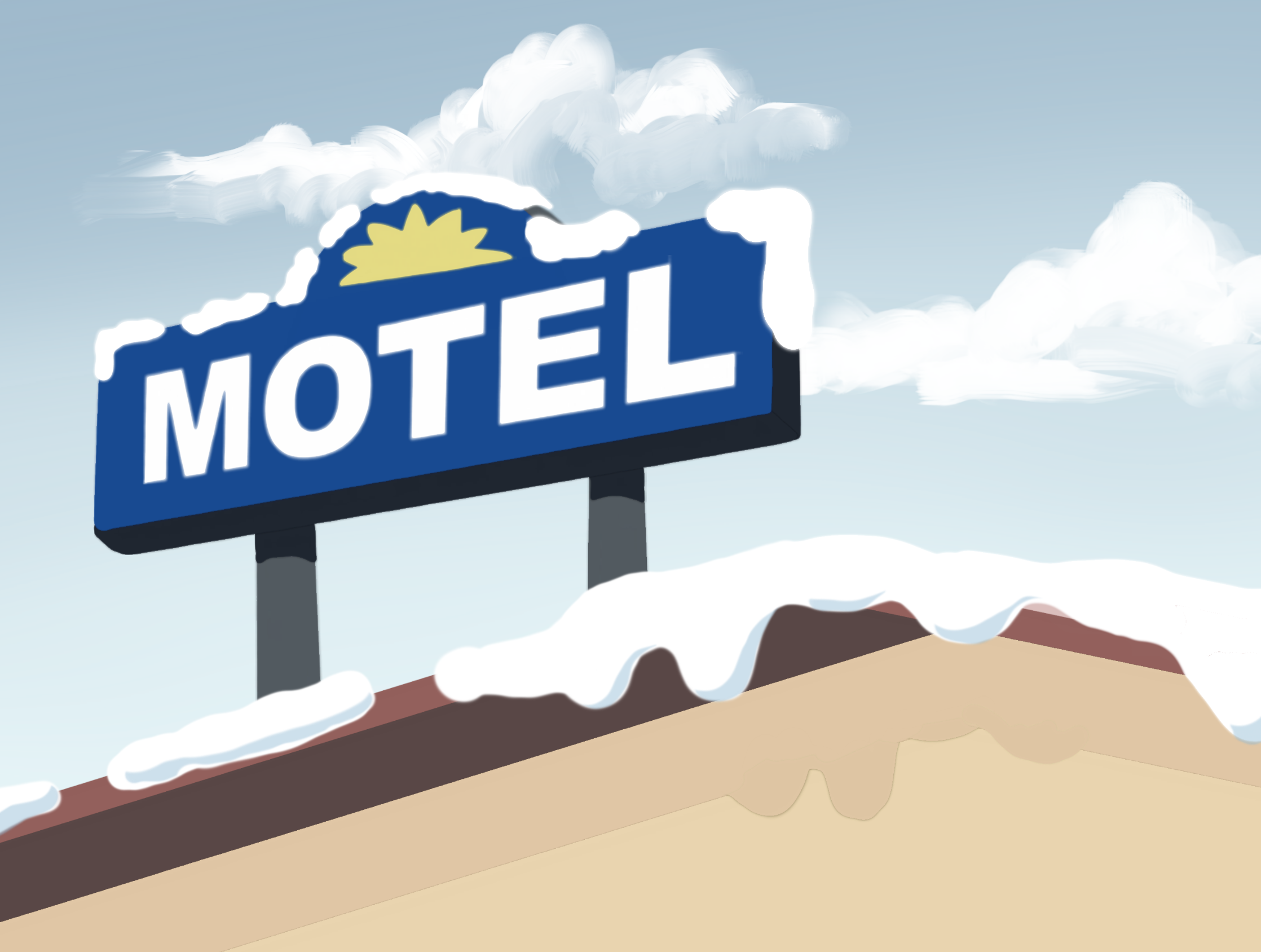 The Days Inn in northeast D.C. has two stars on Yelp. Recent reviewers warn of mold, flickering lights, and cockroaches. The motel served as emergency overflow shelter for families experiencing homelessness for years, but in 2020, the city ended this contract after complaints about the poor conditions and security of the building. Nevertheless, the city deemed it an appropriate place to temporarily house migrant families; last year, as buses full of migrants arrived in D.C. from the southern border, the Department of Human Services started a new contract at the Days Inn to house them.

Not only is the motel struggling to meet health standards, it’s also isolated. The Days Inn is bordered by a fence, train tracks, Highway 1, and Highway 50, making it difficult to access the city. The kids play out in the motel parking lot, according to student tutor Ella Boasberg (CAS ’25).

During the fall, Boasburg crossed the District twice a week to tutor the children at the Days Inn as part of a new cohort of the D.C. Schools Project (DCSP), a tutoring program run by the Center for Social Justice (CSJ) at Georgetown. Boasberg and several other tutors, including MJ Morales (SFS ’26), said the experience of tutoring these children has been both challenging and rewarding.

“I talk about it all the time with all my friends,” Morales said. “But it’s kind of tough work sometimes just because them dealing with their situation, and how that translates into the classroom setting, can get difficult to deal with.”

DCSP has been around for nearly 40 years, started by a Georgetown student in response to the influx of Salvadoran immigrants to the District in the early 1980s. At first, they tutored migrant children in a one-on-one format, with tutors going to children’s homes and helping them with their English. From there, DCSP’s English language programming has grown and shifted to meet evolving needs; prior to this year, it had after-school programs at three D.C. elementary schools, a program for migrant parents in Columbia Heights, and an on-campus program for Georgetown employees who wish to improve their English skills.

Since the buses began arriving in April 2022—a political move by the Republican governors of Texas and Arizona that the D.C. Attorney General is investigating for exploitation—DCSP has evolved once again. Two cohorts of tutors go directly to the Days Inn, each with six tutors and a student coordinator, and they work with around 20 tutees divided by age.

When Boasberg applied to be a DCSP tutor, the Days Inn program didn’t yet exist. She was eager to be in the first cohort and to improve her Spanish, which she said the tutees would laughingly tell her was “so bad.” But what she didn’t expect was how striking the contrast would be between the conditions the kids lived in and those back in Georgetown on campus—and critically, how much the kids needed beyond English instruction.

“We started kind of late in the year, maybe October. And we were going biweekly for an hour, so we didn’t notice much,” Boasberg said. The primary issues the tutors confronted were logistical.

“But then,” she added, “when it was getting colder outside, people were coming in with flip-flops and t-shirts, and the kids were shivering.”

Morales said she and another tutor would always give their coats to two of the kids. But as temperatures continued to fall, the need for warm clothing grew more apparent, and DCSP organized a clothing drive to help out the kids and their families.

“I literally texted, emailed, sent the post to every single person that I’ve ever met in my life,” Morales said. She grew up in Brownsville, Texas, a border town that sees thousands of migrants pass through every year. “And I got so much support, especially from back home.”

According to Lucas Nieman (SFS ’24), a DCSP coordinator at the Days Inn site, tutors raised just over $1,000, which they took to thrift stores to buy coats. But Boasberg said that even after handing them out, it still didn’t feel like enough.

“They went so fast, and then people came up and were like, ‘Where are the clothes?’ And we had to say, ‘They’re all gone,’” Boasberg said. “Hopefully this semester we’ll be able to do more, but there’s just so many problems.”

DCSP is looking to hire new tutors this spring, with an application that closes Jan. 27. According to Nieman, they will be adding a program at MacFarland Middle School where some of the migrant children attend, and a Saturday program to help parents at the Days Inn with their English as well.

“Parents would come in and ask us, ‘Can I join in on these lessons?’” Nieman said. “Because honestly, the parents are receiving fewer resources than the kids are.”

DCSP’s program director, Jessica Lee, said that the Days Inn program’s objectives have expanded out of necessity because the tutees don’t have access to many resources from the government.

“We wanted to create a community. We wanted to help build a network of support,” Lee said. “It’s recognizing that there’s no safety net. There’s no network for folks who don’t have resources.”

DCSP has not been alone in trying to offer services to help out the migrants brought to D.C. on buses; the CSJ provided vans over the summer to take migrant families from Union Station to respite centers, according to Lee, and the city recently established an Office of Migrant Services to coordinate other efforts, from food to legal services.

With all of the unmet needs of the families, Zoë Broderick (CAS ’26), one of the Days Inn tutors, said that it was hard to feel like the work they were doing was really impactful.

“You have to take every inch of progress knowing that there’s going to be a thousand setbacks the next day, and that’s a really hard thing to come to terms with,” Broderick said. “We did ultimately teach a lot of kids basic English, we did ultimately provide winter clothing. But there’s also all these gaping institutional issues that we need to fix.” 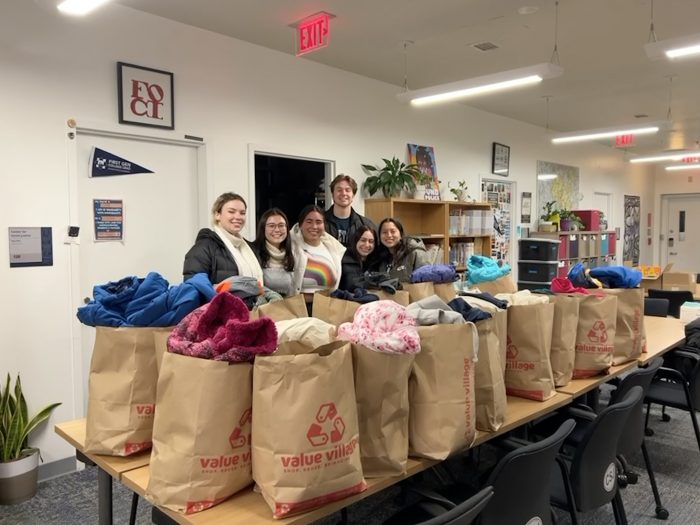 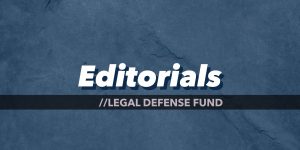 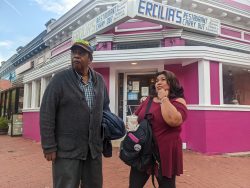