By my calculations, since the Voice was founded 50 years ago, it has seen 12 (and a half) completely new staffs labor over its pages. I joined one of those teams after my first student activities fair when someone shoved into my hands a thin, glossy magazine with three ostriches on the back cover insisting, “Hey, you. Join the Voice.” I took the birds’ advice and sat in a corner of Leavey 424 for an 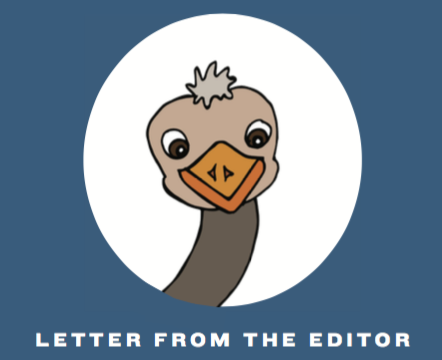 information session, having no idea why there was a broken mannequin in a green blazer lurking in the back of what I assumed to be a professional newsroom. Somehow, here I am four years later.

Our short time in college means you only have a finite period to build momentum toward change for one or two groups you’ve fallen into. But four years later, you’ll have to trust that the new students into whose hands you are shoving thin, glossy magazines will carry on what you’ve worked for during many late nights in a cramped office.

Looking back through old issues of the Voice while preparing for this anniversary issue, I realized that over five decades we have cyclically covered the same topics— tuition, construction, GUSA elections—complained about the same things—shut-down parties and opaque university administrators—and even made similar typos (I won’t go into those). At first, it disheartened me: How could we ever expect to grow if we couldn’t remember what we’d done just five years ago?

But after speaking with Voice alumni over the past few months, I realize that we’ve all had the same goal that led to that repeating coverage: Keep the university accountable and help the campus community use these short years on campus the best we can. The passion for that goal is what has kept the Voice going, with all of its quirks and irreverence and mistakes and improvements that each unique set of staffers have built on throughout the decades.

So when I leave campus in a month, I have to believe that I have left it with a stronger community and a better newsmagazine than when I got here simply because that is what previous Voicers trusted me to do. Before that, please indulge us in this special, 50th anniversary edition. To those who come after us, all we ask is that you enjoy your time on the Voice, the late nights, the long meetings. We ask that you do what we have done, but bigger and better, having a grand old time until at least 2069.

“Student media organizations play an important role in holding institutions accountable for their actions and keeping students informed of events that affect them on- and off-campus. In the face of threats to our ability to do this, it’s more essential than ever that we have the support of our campus communities.”