Who says you should play fair?

Little kids are stupid. They play “make-believe,” think that they can successfully fly off tables and tall buildings, eat glue (or toothpaste, in my case) and genuinely believe that they really beat dad in a tough game of chess. I was definitely no exception to the dumb kid rule. In addition to getting an “F” on a how-to-use-the-library test in the fourth grade, I had even more fundamental problems understanding the way the world worked outside the Dewey decimal system.

For as long as I can remember, I believed that the world was fair. I began to concretize the mechanics of this system around the time I was seven or eight. The way it worked was as follows: God, in all his fairness, ensured that everyone’s life was “equal.” It was pure coincidence that God and I were in perfect agreement as to how to judge equality. God kept a book of balance sheets, and at the bottom line everyone’s assets and liabilities evened out. Thus, if a girl was really pretty, her parents were depriving her of necessary affection. If a boy was from an economically difficult situation, he had a lot of friends.

Nothing beats insulation when constructing a system of universal functioning. Although I feel that San Francisco public elementary school exposed me to a number of the grievances that parents and society commit against children, in the third grade I still had a thankfully uninformed picture of the world. Probably a good thing, considering that seeing a concentration of San Francisco’s homeless population downtown would not infrequently bring me to tears. (I was not only dumb, but also fairly sensitive.)

I was not, however, on the playing field to referee, despite the whole perfect agreement with God situation, but rather to have yellow flags thrown in my wake. I analyzed my own life and became terrified. I thought I was unnaturally fortunate. My parents loved me, my economic situation was stable, I had friends, and I did well in school, putting aside the future library issue. Thus, with the realization of my fortuity, I became paralyzed with fear while waiting for the other shoe to drop.

Pure fear is only sustainable for so long in the mind of a third grader, and I had to take steps to rectify my emotional torment. I searched desperately for something in my life with which I could fill the “liability” column. It wasn’t long before I figured out what the thorn in my side was: my younger brother, David.

Two years and four months of blissful bonding with my parents had been suddenly brought to an end when my mom was cut open a second time to have yet another child ripped from her womb. My mom spent many years assuring me that the reason she had a second child was because the first one brought her so much joy, but I viewed a lack of intelligence as the precipitating factor.

At the end of last summer, a friend of mine from elementary school reminded me of how fully I had convinced myself that the ball of evil that was my brother balanced out all the positive features of my life. She retold the story of how one day in our fourth-grade class, all the students had to say what the worst thing that ever happened to them was. (I’m not sure what the point of this exercise was, but the fact that it was being conducted at an elementary school where the principal told the student body during assembly that we were “chickens with our heads cut off” because we “had no brains, but still managed to run around” and that eating raw Top Ramen would kill us makes it less surprising.) When the teacher called on me, I unequivocally responded, “My brother was born.” I was not only a dumb, sensitive kid but a bad sister as well.

Even now, as much as I can intellectually ascertain that life is, in fact, unfair, I can’t fully shake the concept of life that I constructed when I was in elementary school. When my life is going well, I still wait for the other shoe to drop. When, on January 4, I received my first acceptance to law school, I was thrilled that I was guaranteed a spot in at least one decent school. Combine this, however, with January 4 being the day of my first date with my current boyfriend and subsequent law school acceptances, and I’m left with a profound sense of undeservedness.

My rather patient family and friends can tell me that I deserve to have a great boyfriend and to get into stellar schools, but I can’t let go of how unfair all of it is. If coming to Georgetown has taught me one thing, it’s that the situation we’re born into matters more than anyone with an ounce of pride likes to acknowledge. I had the opportunity to do well in high school because my parents viewed being a student as my full-time job and supported me in any way they could. I was able to come to Georgetown because my parents worked hard all of their adult lives to provide me with a college fund. I was able to do well at Georgetown because I had their continued financial and emotional support. Any resulting success stems from a confluence of opportunities, not deservedness. In order to enjoy the fruits of the labors of which I had little to do with the sowing, tending or harvesting, I need to realize that, as cute as my kiddie worldview might have been, it was far more erroneous than my beliefs about how the library functioned. It’s time to give up on fairness and sink my teeth into the juicy fruit that has landed in my lap. Either that, or my 55-year-old mom needs to have a third child. 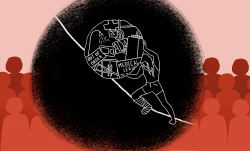