Jenny Faenza (COL `11) passed away on Saturday while visiting her family in Nashville, Tenn. She had been released from a Georgetown area hosptial before break so she could visit her family for Thanksgiving. According to an email the University sent Monday to students and faculty, Faenza died after being hospitalized at the Vanderbilt Medical Center for complications from pulmonary hypertension, a condition marked by abnormally high blood pressure that can cause heart failure.

The University held a memorial service for Faenza on Monday in St. William’s Chapel. At the service, Rev. Bryant Oksvig remembered Faenza in a homily for “her laugh,” for “her ability to be one of the fastest talkers with a Southern accent,” and for being “a ray of joy in the midst of our lives.” 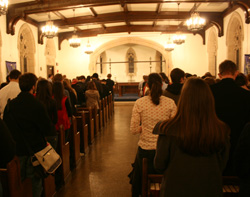 Later in the service, friends of Faenza’s sang “Amazing Grace” and spoke of her presence on campus and commitment to positivity.

“[Jenny and I] had a heart to heart about how the most important thing in life is to be positive. It’s hard because God gives us these little angels and then he takes them away … But I think it’s important to remember that message, to always be positive,” Jessica Holland (SFS `11) said.

In a personal essay she wrote last year for Higher Education and Leadership Ministries as one of its leadership fellows, Faenza said she had been battling pulmonary hypertension since her diagnosis in 2007.  Scleroderma, an autoimmune disease that causes hardening of the organs, including the skin, caused her pulmonary hypertension.

Once they diagnosed her, she wrote, doctors advised Faenza to remain hospitalized in Nashville, so her “dreams of attending Georgetown University crashed.” But after she began taking therapeutic steroids, she became healthy enough to attend Georgetown, which she described as her “dream school.”

Once on campus, Faenza became an ESCAPE leader, a cashier at Midnight Mug, and Secretary of the Protestant Student Forum, in addition to being involved with GPB and other student organizations.

Many who knew Faenza spoke of the inspiration she provided them. As student director of ESCAPE, Sarah Jones (COL ‘09) said she experienced firsthand Faenza’s “bravery and commitment to life every day.”

“Jenny had an authenticity which is seriously lacking on the Georgetown campus and in the world,” Jones said.

During the ceremony on Monday, which over one hundred students and faculty attended,  students shared remembrances about Faenza. Chester Gillis, the Interim Dean of the College, summed up the sentiments of the service.  “We are all given a candle, and [Jenny’s] was short, shorter than most of ours, but it was brighter,” he said.