For Georgetown, which became the first Catholic college or university in the nation to have a LGBTQ Resource Center at the beginning of this year, reconciling a strong religious presence on campus with a burgeoning LGBTQ community has been a hot-button issue. Now, as the LGBTQ Resource Center enters its second semester, campus religious groups, with encouragement from University President John DeGioia, have begun to explore the ways they can work with the center. 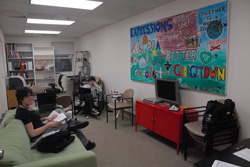 Religious groups and the LGBTQ Center are striving to work together.

According to Andy Pino, Georgetown’s Director of Media Relations, DeGioia has asked all University departments to “work to support our students and the new LGBTQ resource center.”

“The Office of Campus Ministry is an active partner in the University’s work to foster a respectful and welcoming community,” Pino wrote in an e-mail. “As such, each chaplaincy and faith community is reflecting on how they might be able to support this work of the University.”

Attention was drawn to the relationship between religious groups and the LGBTQ center by a recent article in the Washington Times (“College decrees welcome for gays,” January 8, 2009), which alleged that the University was specifically forcing Protestant Ministries to coordinate events with the Center. The article set off a flurry of criticism from religious blogs, which accused the University of being heavy-handed and overly secular.

However, Pino, LGBTQ Resource Center Director Sivagami Subbaraman, and Father Patrick Rogers, S.J., Director of Main Campus Ministry, all denied that such an order was given.

“Georgetown Protestant Ministries (including our Affiliated Ministry partners) has never been instructed to hold any event in particular with the LGBTQ Center,” Rogers wrote in an e-mail. “We were simply asked to engage in a conversation about how Protestant Ministries on Campus might engage the LGBTQ Center with respect to each ministry’s theological and religious traditions. This question is being asked of every chaplaincy in Campus Ministry, and the conversations are just beginning.”

According to Rogers, campus religious groups held a meeting on Tuesday, January 13 to discuss how they could support a “diverse student population” which includes LGBTQ students. Rogers admitted that many groups were wrestling with how to accomplish this while staying true to their religious beliefs regarding homosexuality and premarital sex.

“During our meeting … many ministers had concerns to not only homosexual activity, but all sexual activity outside the covenant of marriage,” he wrote in an email. “We live in a highly sexualized culture, and most people in the ministry see this trend as hurting young people in many ways. All of us in ministry on Campus seek to address this issue in a way that all students can hear and understand.”

Subbaraman said she has made several presentations to campus ministries. Her goal, she says, is not to challenge theological teachings, but rather to provide support for students.

“There are clearly those traditions where being gay isn’t alright,” she said. “My intention as someone in the LGBTQ community is I’m inviting everyone to come together to discuss this. … [Just] having the Center here has been a huge accomplishment because it does fly in the face of Catholic teachings. The very fact that the Center exists means people want to have a conversation.”