After months of investigation into the labor practices of Russell Athletic, a major producer of athletic gear for universities that has been accused of violating workers’ rights in Honduras, and under pressure from the Georgetown Solidarity Committee, Georgetown’s Licensing Oversight Committee decided on Tuesday that it will not renew the University’s contract with the company when it expires June 30. 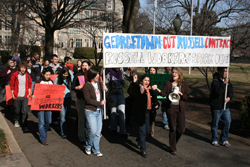 The company is accused of shutting down the Jerzees de Honduras factory in Choloma, Honduras, in response to an attempt by the workers to unionize. Russell has argued that the closure was a purely economic decision.

Closing a factory due, even in part, to workers’ efforts to unionize would violate Georgetown’s Code of Conduct for its licensees, which states in Part IV, Section D, that “licensees shall recognize and respect the right of employees to freedom of association and collective bargaining.”

On Monday, Solidarity hosted a protest demanding that the University cut its contract with Russell. At the rally in Red Square, Moises Alvardo and Norma Castellanos, workers at the factory who are also the President and Vice President, respectively, of the factory’s union, spoke about their experiences and asked for Georgetown’s support.

“The code of conduct that Georgetown has has not been respected,” Alvardo said. “We need universities to respect their code of conducts and our right to organize.”

Alvardo and Castellanos are conducting a speaking tour of universities that contract with Russell Athletic, sponsored by United Students Against Sweatshops.

According to Marley Moynahan (SFS ‘11), a member of both Solidarity and the Licensing Oversight Committee, a committee of students and administrators that monitors the companies with which Georgetown contracts, LOC has been monitoring the Russell case since the middle of last semester and wrote to the company three times expressing their concerns. One letter went unanswered, and the other two elicited, in her words, “very perfunctory” responses.

“Russell has behaved really shockingly badly in terms of not even trying [to work with universities,]” she said. “They’re a pretty bad company.”

Moynahan said LOC decided not to renew the contract, rather than terminate it immediately, for economic reasons. She said they will also be releasing a “strongly worded letter” criticizing Russell.

“It made a lot more sense to just let it run out because the process of terminating contracts is much more arduous and might even take longer,” she said.

The Workers Rights Consortium, an independent labor rights monitoring organization, investigated the Choloma factory closure and released a report concluding that, although there may have been economic concerns, anti-union hostility was also a factor.

“People can have multiple motives,” WRC Executive Director Scott Nova said in an interview. “We know that the desire to get rid of the union was a motive, even if it was accompanied by an economic motivation.”

However, the Fair Labor Association, a coalition of companies and universites that monitors workers rights, also investigated the situation and found that Russell Athletic’s assertion that the closure was not connected to unionization was credible.

“Given the rapidly declining orders for certain products, the overall global economic context, and the wave of factory closures throughout the apparel export sector in Honduras, including three Russell factories in the last year, the FLA finds the economic factors persuasive and accepts that Russell’s decision to close JDH was principally a business matter,” the FLA report states.

According to Moynahan, the LOC gave less weight to the FLA’s report because corporate executives are on the association’s board, something which the LOC felt might have affected their findings.

Representatives of the FLA and Russell Athletic did not respond to requests for comment.

By Joanna Li and Angelena Bougiamas