The Georgetown University Student Association Senate approved six out of the Student Commission for Unity’s eight proposals designed to address what the commission sees as the University’s diversity problem. 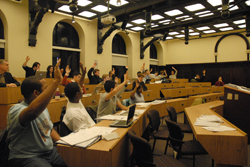 The yeas have it: The GUSA Senate votes on SCUnity's proposals

The proposals that GUSA voted against were the institution of a two-course “social justice-oriented” core curriculum requirement for all four schools and the allocation of SAC funds to encourage different clubs to find common ground through programming.

The core curriculum requirement proposal received 12 of the 13 votes needed to pass, with 10 Senators opposed and two abstaining. Several Senators spoke out against the proposal, including Matt Wagner (SFS ‘11), who thought the requirement would be a burden to students.

The other proposal that failed, which called for SAC to allocate funds in a manner that fosters collaboration between dissimilar clubs, was criticized by Senators for being “vague,” “not feasible,” and unnecessary, on the grounds that clubs often naturally decide to work together.

The most controversial of SCU’s proposals, which would mandate placing students in freshmen dorms according to a 4-to-1 white-to-minority ratio, will be officially rescinded by the SCU on Sunday, according to SCU’s chairman, Brian Kesten (COL ‘10), and was thus not voted on by GUSA. Kesten cited an “obvious legal problem” as the reason for the retraction.

Kesten said he felt the debate played out along racial lines.

Most Senators said they felt positive about the meeting’s outcome.

“The meeting was probably one of the most composed and respectable meetings GUSA has had,” GUSA Speaker of the Senate Reggie Greer (COL ’09) said. “I really appreciate the behavior of the Senate, especially because this is such a sensitive issue. This is the first student commission, and voting on these proposals shows how far the Senate has come.”

Some, however, expressed concern over the commission’s independence. They criticized Kesten for meeting with administrators before the report had been approved by GUSA. According to Kesten, members of the SCU have met with over 60 administrators and faculty over the past year.

“The SCU has been a part of GUSA since [SCU’s] formation,” Kesten said. “Putting the SCU in GUSA is a good example of what students can do for their university. It lends credibility and legitimacy to an organization that desperately needs something to brag about.”