Eight students are vying for the position of Georgetown University Student Association President this year. A primary will be held February 24 with a run-off between the top two tickets two days later.
Improving campus safety is a common thread throughout the campaign platforms, and many candidates have suggested improving the SafeRides program. 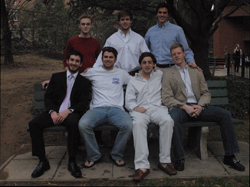 Jeff Lamb (MSB ‘10), who is running with Molly Breen (MSB ‘11), suggested a broad overhaul of the safety system, including a student walk-along within three to six blocks of campus. Lamb says he has lots of experience in organizing and planning as Chief Financial Officer of the Georgetown University Student Investment Fund.

Many presidential hopefuls have specific proposals for improving the University. Pete Dagher (MSB ‘10), who is running with Elias Ibrahim (MSB ‘10), focused on creating a book-sharing program.

“We would get [the registrar] to email students going into a class with a list of people who took the class last semester,” Dagher said. “That way, students could get their books for half price, instead of getting ripped off by the bookstore, and they’d be all set for the next semester.”

Cory Perkins (SFS ‘10), whose VP candidate is James O’Brien (MSB ‘10), wants to create a blog updated by administrators to increase transparency. Perkins also thinks every textbook should be available on reserve in the library.

Other candidates focused on broader on-campus themes. For Brock Magruder (COL ‘10) and his VP candidate Brian Litwak (MSB ‘10), the most critical issue is holding the administration accountable for serving all students.

“A lot of people feel like the administration is out of touch with the reality of being a modern college student,” Magruder said. “We’re trying to really have a complete overhaul of the alcohol policy and the discipline process associated with it.”

Joe McGroarty (COL ‘10) and Dimitrios Kaotsoukos (SFS ‘10) are more concerned with the responsiveness of GUSA than with school administrators. McGroarty thinks the solution is greater access to information in the form of an online resource with answers to basic student questions.

“What we need to do is institutionalize communication in that we need a body of knowledge that is passed from one GUSA President to the next,” he said. “Students feel like [they] don’t know why things happen and they feel like the administration doesn’t listen to them.”

“Running as a sophomore was great and I learned a ton, but you’re not ingrained in Georgetown until your junior year,” Hayes said.

This year’s election features two all-sophomore tickets. Of the eight duos in the race, the all-sophomore tickets are the only two that include candidates currently involved in GUSA.
Josh Mogil (SFS ‘11), whose Vice Presidential candidate is Lauren Klein (MSB ‘11), is a current GUSA Senator. According to Mogil, his GUSA experience gives him insight into the inner workings of the organization.

“GUSA can easily be more effective,” Mogil said. “One of our ideas is to reform the funding board and class committees, whose members are hand-picked by the President … There are so many boards that overlap between the GUSA Executive branch, the Senate, and the administration. GUSA has a tremendous budget, and overlapping and irresponsibility should not be tolerated.”

“They’ve initiated some great programs, but there are one or two things they had no time to follow through with, like the diversity issues and career services,” Angert said. “It would be nice to have some continuity, not in our platforms, but we see how the system works and we can hit the ground running.”