Angert at the wheel

Although the GUSA Senate only officially certified the results of the organization’s presidential election this Wednesday evening, newly elected GUSA President Calen Angert (MSB ‘11) says he’s “already getting the ball rolling.” He and his Vice President, Jason Kluger (MSB ’11), have already met with administrators, faculty members, and neighborhood groups to start working toward the goals they outlined in their campaign: mitigating 61D noise complaints, streamlining funding for student programs, and improving campus safety. 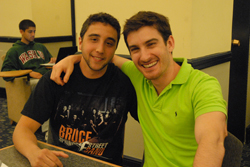 “We’ve already met with off-campus residents to figure out how to deal with the 61D noise complaints,” Angert said. “We’re trying to find a way to limit agitation on both sides, so students don’t get mercilessly drilled to the ground for a violation, and the community as a whole is happy with student conduct.”

Angert and Kluger also plan to create a “Georgetown Fund” which will co-sponsor student programs. They hope to raise $22,000 to supplement the $8,000 from the GUSA executive budget that they already plan on allocating to the project.

Angert acknowledged the number was “ambitious,” but hoped it would be achievable. He said he does not have a concrete plan for raising the money yet.

When the GUSA Senate discussed the plan at their Wednesday meeting, most Senators supported it.

“Setting aside money in the budget to co-sponsor clubs is something I have hoped GUSA would start doing for a long time,” GUSA Senate Speaker Reggie Greer (COL ’09) said.

Angert and Kluger said their experience working in the GUSA executive branch under Pat Dowd (SFS ’09) would be useful in retaining institutional knowledge and being able to follow through on the work Dowd started this year. As rising juniors, they could theoretically be President and VP for two years in a row. However, neither of them would say for certain whether they intend to run again.

“We’ll see how this year goes and how things work out,” Angert said. “Sitting in the driver’s seat is a different experience. We’re hoping to get as much done in the coming year as we can … You better believe we are working hard.”