In response to 10 instances of anti-Semitic or anarchist graffiti reported to DPS in the last week, students decided to hold a rally in Red Square on Monday to speak out against what they deemed “acts of hate” on campus. 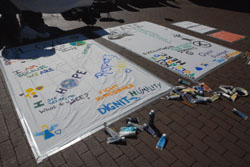 According to the DPS crime log, DPS was initially notified of the first incidence of vandalism—an SS symbol superimposed over a cross spray-painted onto an external wall of the Leavey Center—last Monday night.

Over the next week, more graffiti was found in Village A, Henle, Darnall, Copley, Gervase, and at the Georgetown Visitation Preparatory School, located on the corner of P and 35th Streets.

When Julia Shindel (COL ‘10) heard about the graffiti, she took matters into her own hands.

“I believe a collective decision should always be made regarding such issues, especially with such a hate symbol, so I just emailed students from a variety of groups for a meeting,” she said.

The invitation sparked a chain of over 40 emails between students from 14 campus organizations. The group decided a rally in Red Square would be the best way to take a stand against what they perceived as an anti-religious and hateful tone on campus.

The majority of the student body found out about the graffiti in a broadcast email that was sent out on Friday, March 27.

According to Kelsey Spitz (SFS ‘10), those who were planning the rally “were upset that [the news] took three days to get to the community.”

Dave Hammerman (MSB ‘11), Vice President of Religious Affairs for the Jewish Student Association, had another concern: the fact that Schindel and others didn’t contact the JSA until Friday.

Hammerman pointed out that Rabbi Harold White, Senior Jewish Chaplain, was unaware of the crimes until students from the JSA told him. Hammerman believed that Rabbi White, as a religious leader of the Jewish community, should have been given advanced warning.

According to Student Commission for Unity Chair Brian Kesten (COL ‘10), the way news spread about the graffiti sparked a larger discussion about the inadequate role that student groups play in the bias reporting process.

“We were trying to find the best way to be reactive and proactive, to react to incidents and educate students about how to express the social issues at hand,” he said.

Their solution—the rally in Red Square—drew a crowd of about 100 students, faculty, and administrators. Speakers included Rabbi White, as well as Father O’Brien, Director of Campus Ministries, and Farah El-Sharif (SFS ‘09), former president of the Muslim Student Association.

In her speech, Sharif quoted a passage from the Qu’ran. 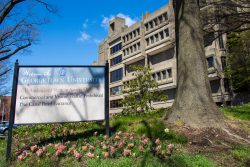