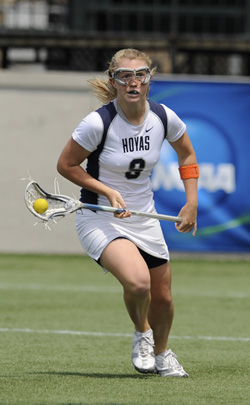 A 1-4 start in any sport usually marks the start of a futile season.  For the twentieth-ranked Georgetown women’s lacrosse team, however, it signals a confident beginning.

Georgetown’s poor record is the result of the gauntlet the Hoyas had to face at the start of the season: they fell to the second-, third-, fifth-, and 14th-ranked teams in the country.  Despite the lopsided results, seventh-year head coach Ricky Fried embraced the brutal stretch the Hoyas constructed to open the season.

“A lot of people say, ‘start off easier, get some more confidence,’” Fried said. “My view is that the harder you start off, no matter what the record is, it’s going to make you a little more battle-tested. We gain confidence from actually getting better as opposed to just the win-loss record.”

This season’s Hoyas are led by seniors Mary Beth Brophy and Logan McCraw.  Fried considers Brophy the team’s emotional leader, as the group responds positively to her energy.  McCraw meanwhile, leads a Hoya defense that has already shown dramatic improvement since giving up 24 goals to Northwestern in their first game.

“Jordy is the motor that makes our offense go,” Fried said.  “She’s taken over the mantle [and] jumped all in.  She has a good balance of pushing and supporting her teammates while definitely having their respect.”

One member of this freshman class is Barb Black, who has earned the starting goalie role.  In addition to Black, the Hoyas brought the country’s top recruit to the Hilltop, midfielder Kelyn Freedman. Unfortunately, Freedman has been battling an injury thus far this season and has not had a chance to make a true impact on the season.  Despite the hype this class has received, Fried remains reserved, not expecting huge results from his freshmen right out of the gate.

“Whatever we get from them is a bonus, in my opinion,” Fried said.  “It’s a learning year for them–but they’ve done a great job of looking past the fall and realizing they’re not truly freshmen anymore.”

This mix of veterans and underclassmen has the Hoyas looking forward to life after the season’s opening stretch, starting with Villanova and continuing with the rest of the Big East.

“Villanova’s big for us,” Fried  said. “They’re not necessarily a huge rival, but we have to continue to progress.  One of our goals is to go undefeated in the Big East again–obviously the only way to do that is to win the first game.”

With a history of success in the Big East, the Hoyas clearly have a great deal to be optimistic about.  The team is excited to play at home for the first time since falling to Duke, and is eager to put the early season struggles in the rear-view mirror.

“It’s been challenging from the start, but I feel that it’s making us stronger,” Kirr said.  “We’re about to head into Big East season and we’re really excited for that.”

The Hoyas begin Big East play on Friday at 6 p.m. at Multi-Sport Field.