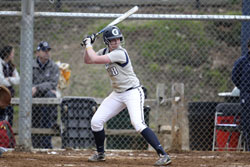 Mired in a season-long slump, the Georgetown women’s softball team (9-28, 3-2 Big East) decided to forget about the past and focus on the Big East grind that awaited them.

That philosophy paid dividends two weekends ago when they started on a run through the conference against Connecticut.  They took one of two games and got their confidence back in defeating quality opponent.  They parlayed the results into more success this past weekend, taking two of three from Villanova and narrowly missing a sweep in their final game.

For head coach Pat Conlan, different aspects of the team’s play have been promising, but only recently have the Hoyas strung together every facet of the game to produce wins consistently.  In the beginning of the season, if their offense was not off, then their defense or pitching suffered.

“We’ve done all of those things well at time,” Conlan said. “We just haven’t put it all together.”

The slow start has to be mostly attributed to the overhaul the Hoyas roster went through, losing six starters from last season.  They added eight freshmen, many of whom are starting.  Newcomers Jenna Stark, Alexandria Antilla, and Elyse Graziano have been regulars in the lineup. Conlan acknowledged that lack of experience has played a large role in her team’s performance this season.

“There is a huge adjustment from high school to the college game, and I think they’ve truly turned the corner in making that adjustment,” she said.  “I think the experience is helping as we’re more comfortable with each other.”

Certainly, some teams would fold and struggle to keep focused for the remainder of a season given such a devastating start.  However, the Hoyas rededicated themselves, seeking a fresh start in Big East play.  According to Stark and junior Mackensey Carter, they began practicing harder, spending extra time in the batting cages, and working on fundamentals.  Carter, in particular, recognized the same turning tide that her coach saw in the team.

“I think everyone is playing with more confidence,” Carter said.  “Once we start Big East, it’s a new season.  We came out with a new fire and passion.”

Throughout the season, Carter and sophomore Shikara Lowe have carried their team, waiting for the freshmen to make their impact.  Both have started all of the team’s games, and together have accounted for almost 30 percent of the team’s runs and RBIs.  During the beginning of the season, the Hoyas batted just .223 without producing many runs.  In the five Big East games since then, Georgetown has hit .319, scoring 27 runs and playing with the renewed spirit Carter and her freshman teammate, Stark, recognized.

“We all kind of snapped into gear and have been doing a lot extra,” Starks said.

As for the impact she and her younger teammates have, their footprint on the program is just beginning.

“I think we all came in wanting to make an impact as a group,” Stark said. “We can completely change this program is kind of our goal.”

Despite optimism for the remainder of the season as well as the future, the Hoyas have still been unable to string together an extended winning streak this season.  After their Tuesday night matchup with University of Maryland-Baltimore County was rained-out, Georgetown traveled to College Park only to lose both ends of a double-header to Maryland by scores of 10-0 and 1-0.  The lauded offense disappeared for a day, but these losses are not part of their Big East campaign, and won’t affect their chances of making the conference tournament.

The Hoyas’ youth movement may serve them well going down the stretch, but the results will become more tangible starting next season, when these freshmen have a full year of experience under their belts.  For now, the team is working hard to forget the beginning of their season and focus on the task at hand.

“Overall, our year may not look that great, but the Big East is all that matters right now,” Stark said.