Union Jack: Gun control is an incomplete solution at best

I count myself among the millions of Americans whose immediate reactions to the Sandy Hook massacre were horror, sadness, and then outrage that the nation’s laws regarding firearms ownership are so dreadfully inadequate. I was repulsed by White House Press Secretary Jay Carney’s deadpan declaration on the afternoon of the shooting that “today is not that day” to talk about gun control, and got into a heated argument the same day with a friend, berating him for his failures to see the plain connection between shooting deaths and the easy availability of guns in this country. And I’m still largely of that opinion: there is no question that there is a link between the stunning murder toll and lax laws.

Just over a month after the shooting, President Obama has formally laid out an extensive and impressive gun control proposal, including criminal background checks for all gun sales, reinstatement of the assault weapons ban, a federal gun trafficking statute, and an additional set of 23 executive orders.

“This is our first task as a society: keeping our children safe. This is how we will be judged,” Obama told reporters on Wednesday. “We can’t put this off any longer.”

Standing by itself, the administration’s swift action is commendable. Extensive gun violence, on a basic level, can be partly addressed by reasonable gun control. But it’s important not to fetishize modest technocratic remedies to deeper structural problems, as mainstream liberal discussions about violence unfortunately seem to do all too often. The notion that gun control alone will wipe away gun violence, is ultimately inadequate.

The administration’s recent proposal, like the demands of many of the most vocal pro-gun control advocates, are detached from the increasingly hierarchical and unequal society we live in. Inequality, poverty, and lack of opportunity all breed violence—but these issues receive scant attention from superstar gun control advocates like New York City Mayor Michael Bloomberg. During his more than 10 years at City Hall, the multi-billionaire Bloomberg has presided over a deepening of the income gap in New York City, which is, as the New York Times noted, now on par with Sub-Saharan African countries. It is doubtful that the mayor’s policies of closing public schools, his total lack of interest in affordable housing, or even his police department’s policy of stop-and-frisk that targets brown-skinned youth, are, as Obama urged, keeping children safe. The children that are part of the 21 percent of the city now living in poverty could be made safer by having affordable housing for their families or adequate education. Having less guns on the streets, whether it’s in New York or elsewhere, ultimately does far too little to actually improve the safety of the majority of the population.

The administration should be applauded for its recent proposal. But the discussion about gun violence—if it’s truly centered around the safety of young people—needs to be broadened far beyond gun control. As the debt-ceiling negotiations approach, with cuts to Social Security, Medicare, Medicaid, and other vital social programs apparently all on the table, we should keep that bigger picture in mind.

Take your best shot at Cole at cstangler@georgetownvoice.com 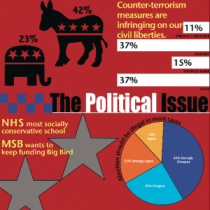 Out of left field: The Voice‘s 2013 politics survey

America will eventually realize how ineffective most gun control legislation truly is. The Assault Weapons Ban is a prime example of ineffective legislation that is tried time after time yet fails to meet its stated goals. The ban on extended clips is just more of the Left wing nonsense we have come to expect from this (so far) failed Obama presidency.

“And I’m still largely of that opinion: there is no question that there is a link between the stunning murder toll and lax laws.”

That’s probably because you know nothing about guns. Riddle me this, Genius, why does Vermont, a state with some of the most lax gun laws in the US, also have some of the lowest gun crime? What about Wyoming? Please explain how further gun control will stop another Sandy Hook which, by the way, occurred with a firearm purchased in New Jersey (one of the most strict gun states in the country).