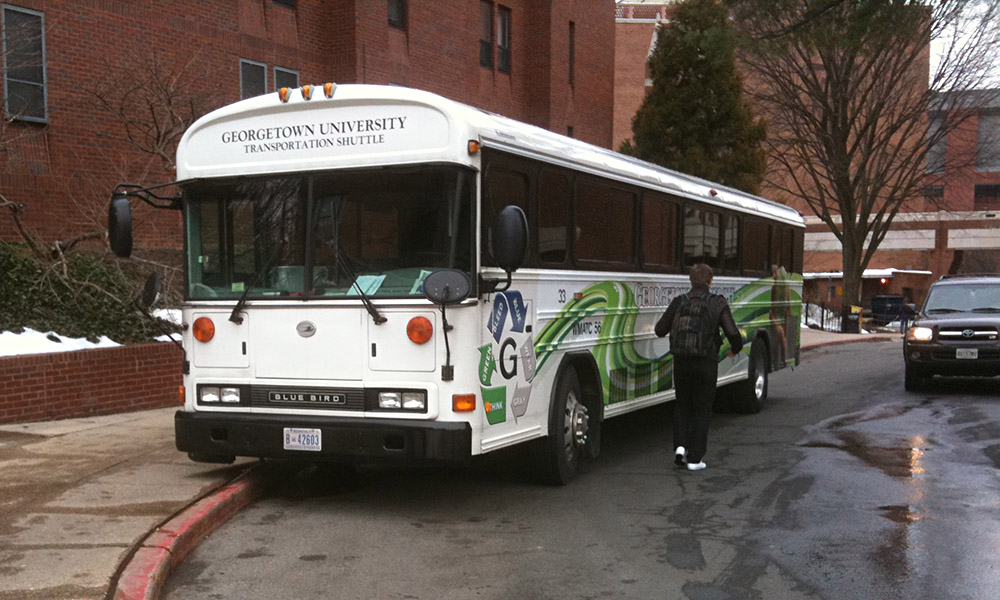 Pieter Fossel (SFS ‘14), Georgetown University Student Association Secretary of Neighborhood Relations, said the alternate GUTS bus routes would not inconvenience students, as changes are merely adjusting the driving route and will not change the on-campus bus stop locations or add any additional stops. “The change mostly affects the Dupont route and buses that go through Burleith,” Fossel said. “It just alleviates the stress on the community. The actual changes themselves maybe in the longer routes [as] a three to five minute longer commute.”

Another improvement to transportation designed to convenience students and improve neighborhood relations is the recent implementation of late night shuttles to and from M St., Adams Morgan, West Georgetown, and Burleith. Additionally, students will be able to track both the GUTS routes, as well as the routes of new late night shuttles through a new app, NextGUTS. Integrated with the app DoubleMap, NextGUS will go live on Monday, April 15.

“If you’re in West Georgetown or Burleith and contemplating walking down to M St., you can see where the shuttle is. The idea is to increase student use of the services and get people on the shuttles and off the streets,” Fossel said.

While definitive improvement has been made involving accessible student transportation, plans for new dorms are still in progress. As revealed in the Planning 102 session, the most likely location for a new on-campus living space is the northwest triangle area across from the Reiss building—raising concerns about space and pedestrian traffic. In terms of whether it will fit on the site, Vice President of Planning and Facilities Management Robin Morey is confident that the space is optimal for construction. “What we have is just some renderings and some diagrams that show a facility will fit on that site that will hold about 170 beds,” Morey said.

The entitlement process for construction on that site has already begun, which will be followed by a permitting process through the city before architectural drawings and construction can begin. “There will be impacts to pedestrian pathways through that site, and all of that is part of the detailed design as well,” Morey said. “Once we figure out what that footprint is going to be and we determine where our ‘laid out’ area, where you stage all of your equipment and materials and supplies [are], then we’ll determine what the pedestrian pathways through and around that site will be.”

The northwest triangle was selected from a total of seven sites due to its promising location. “By far, a majority of the population is in the south. We think that bringing more energy up to the north of campus will help us also energize the Leavey building. We think we can better recenter that for students,” Morey said.

However, Morey noted the Leavey Center itself needs to be reenergized, although after plans to construct dorm rooms were discarded, so was the potential for revamping the facility—both the main areas as well as the offices on the fourth floor. “There is nothing in the works to do anything with Leavey. When I say we’d like to reenergize Leavey, we think the common areas can be better utilized,” Morey said.

GUSA Senior Counselor and Director of Student Space Jack Appelbaum (COL ‘14) recognizes the need to improve Leavey. “The fourth floor definitely needs attention, the lower levels need attention, places like Hoya Court,” he said. “[New South Student Center] doesn’t solve all of the space problems on campus. It solves some specific space problems. It’s going to be great, but student organizations are still going to largely make their home in the Leavey Center and the space there needs to be improved.”

The construction of a dorm building in the northwest triangle was chosen over the Leavey option due to its potential to move more underclassmen into dorms and out of apartments. “By creating more living space on campus, those sophomores that are living in Village A might be living in this proposed dorm in the northwest triangle, for instance,” Fossel said. “Then it would be the seniors that are renting [and] living off-campus that would have spaces to live in on-campus options, such as Village A or Nevils.”

While Fossel noted that many seniors would choose to live on campus if given the chance due to convenience and assured quality, Appelbaum recognized the challenges associated with such a shift. “What’s going to happen is that the University is going to need to make living on campus more attractive because they need to get students back on campus,” Appelbaum said. “They’re just building the beds, it doesn’t mean students are going to come, so they need to make on campus living attractive. Building the beds is one step, but then making the beds desirable is a very important next step.”