The Bar Issue: Three Hoyas walked into a bar… 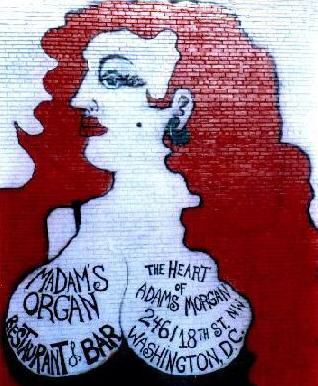 I thought I’d need to travel back to Madrid to have another ermitaño, but a similar Amaretto, ice cream, and coffee-based drink exists right in Dupont Circle. At Kramerbooks it’s called the Almond Eyes, and the only differing ingredient is crème de cacao. Like all the other coffee and ice cream based drinks at Kramer’s, it’s decadent—especially when paired with a good book.

These concoctions are sweeter than their Spanish counterparts, but nothing comes closer to drinking dessert than the Goober Pie Martini. With chocolate and vanilla vodkas drowning in peanut butter liqueur and Frangelico, it tastes just like the pie it’s named after. It’s a bit much, and the pie menu at Kramer’s is so good it doesn’t warrant kitschy alcoholic remakes.

Kramer’s bar has a solid beer menu as well, with a varied but well-curated mix of local and craft options. In fact, the first time I went to Kramer’s for the beer rather than the books was to meet with an old professor.

Located to the left of the sci-fi section and just beyond the poetry shelves, the bar at Kramerbooks offers the perfect mood for those who’d rather drink with Austen than rage with Miley.

Just two blocks away from the bustle of U St., beer lovers will find their next refuge for easing back with some fine lagers in Garden District. With its outside patio and exclusive selection of beer, this bar is a pleasant relief from the often crowded and loud U St. bar scene.

Right on the corner of 14th and S, this German-inspired beer garden’s fenced-in courtyard, occupied by long wooden picnic tables shaded by blue umbrellas, easily gives newcomers the feeling that they’re enjoying a beer in Munich.

Garden District’s beer menu does nothing but underscore this feeling. The limited but high-quality selection of American and German draft beers come in two sizes, served in liter or half-liter mugs. Though your instinct may be to order a Hofbrau original lager or any of the other great German beer offerings, don’t be afraid to try an American brew—Michigan’s smooth and refreshing Bell’s Amber Ale, for example, is sure to surprise.

However, beware that the popularity of this beer garden has dramatically increased in the past months. Finding a spot can be hard, so plan to arrive early for late afternoon drinks and dinner. They’re also famous for their pulled-pork sandwiches and barbecue. Or stop by for a beer once your body’s had its fill of U Street’s excitement. It’ll be sure to put a hopping end to your evening—Prost!

I was initially sketched out the first time I stepped into 18th Street Lounge. The narrow stairs and dark atmosphere made it seem like a place where dark, sexy things happen. But I have to admit, the night time haunt has quickly become one of my D.C. guilty pleasures.

The large building is filled with uniquely-themed rooms that have been transformed into bar and lounge areas with attitude. The first room you enter is the biggest and is split between a lounge and a scandalous dance floor. No other room ever seems as handsy as this part of ESL—I only ever dare enter when I’m at least five drinks deep and willing to get groped and grope in kind.

If you manage to get past this floor unscathed, you enter a deck area with another bar and a much larger dance floor. As a plus, this open-air space allows revelers to smoke, drink, and grind all at the same time. The music is generally faster, and, thankfully, it’s not difficult to find yourself in the middle of a dance-off. This is my favorite part of ESL, because it really doesn’t matter how terrible your moves are. Trust me, I’ve jumped into a dance-off and did the lightbulb, only to be cheered on by strangers.

And if neither of these spaces suits your dancing fancy, I bet you’ll find a dancefloor just for you in one of ESL’s many ambiances. Because if I know one thing from many an evening spent in ESL’s dimly lit rooms, it’s that whatever your scene, ESL can at least guarantee you a place to literally dance the night away.

In a rare attempt to leave my regular campus debauchery scene, I rolled into Science Club in Dupont Circle for the first time with a few friends late Saturday night. After passing through an inner courtyard, we climbed upstairs to find an incredibly empty, dark room with blaring but energetic electronic music and a strobe light on rampage.

We retreated and headed down to the basement where the lighting and music remained at more reasonable levels. The ambiance was enjoyable, though the only connections to the bar’s supposed theme were a few graduated cylinders and a periodic table. After looking through the menu we chose the cheapest beer, $3 PBRs, but there was a good selection of wines and vegan/vegetarian options. The service at the bar was slow, so we left one person to get the brews while we went outside to find a spot on the stoop, the only seats left in the packed courtyard.

We lit some cigarettes and took in the crowd, who were mostly in their late 20’s and early 30’s, professional looking, and pretty attractive. I don’t know if the bar is fake-friendly since we were all over 21, but I can tell you that the crowd is not fake-friendly. They are in fact quite blunt. One patron complemented my friend’s Yoshi shirt, and then his girlfriend called me a dork and laughed as they walked away. All in all it was a pleasant bar with danceable music, and not too pricey to boot. I’ll be heading back there, as soon as I pop this frothy Georgetown bubble.

Trust me when I say there exists a Georgetown bar that isn’t an hormone-raging freshman-meet-jock dance floor or a scene so hip that it justifies a $15+ vodka cocktail. As a lively yet affordable dive, Mr. Smith’s certainly steps out of the M Street ordinary.

Among Georgetown’s charming shops and eateries, you’ll find Mr. Smith’s, “The Friendliest Saloon in Town,” on M right before you hit Wisconsin. Though a mediocre restaurant by day, don’t let their blah-burgers deceive you—once happy-hour gets going, a hearty crowd sweeps in for good drinks and great vibes.

Proudly home to Georgetown’s only piano bar, Mr. Smith’s boasts a different charismatic pianist every night of the week. Grab their craft beer of the month at only $3 a pop, sit back, and take in the show tunes until next thing you know, you are belting out Bohemian Rhapsody with your new friends from across town. Sound a little hokey? Sure, but I dare you to give it a shot—or four. I assure you that you’ll be at the piano requesting the next song and maybe throwing a dollar or two the piano man’s way for such roaring entertainment. If you’re still convinced a piano bar isn’t your hot toddy, move on back to Mr. Smith’s delightful outdoor beer garden. Either way, it’s difficult not to just find a spot and enjoy the company at this cozy outside-inside bar.

And with a no cover charge policy, there’s nothing to lose in trying out this Georgetown gem.

Situated on 18th St. in colorful Adams Morgan, Madam’s Organ may be the bar where you have to put a napkin over your drink when you go to the bathroom, but it’s a raging good time. Some say it’s seedy, but the three-story bar is a perfect place to meet people with its quirky mix of young professionals, college kids, and townies—and rumor has it that BJ’s are liberally administered on the dance floor.

If live music is your thing, Mondays are jazz nights, Wednesdays are for open-stage bluegrass, and every Thursday night a jazzy latin band gets rowdy. From personal experience, I can tell you that it is perfectly acceptable to grab the tambourine and join the ensemble.

Up a grimy set of stairs, on the second level a District D.J. spins music at several decibels above a 747 engine. Make it all the way to the top floor for a nice view of the city, some conversation, and a smoke at the open-air bar. And if you need a reason to justify the naughty escapades that are sure to happen at Madam’s Organ, do know that on Thursdays some of the money you spend eventually makes it to a nonprofit.

City on a Hill: No more snow days for D.C.