The NFL draft is fast approaching and if you ever tune in to ESPN or a similar sports network you’ve surely seen the hype machines talking up or down certain prospects. One day Johnny Manziel’s stock is at an all time high and the next day he is the fourth best quarterback available. Teddy Bridgewater was a consensus first overall pick for a while, but recently I have heard talk about teams waiting until the second round to take him. There are ESPN analysts who talk about stocks going up and down more than any finance professor I’ve had. With so much conflicting data and rapidly changing evaluations it makes me feel bad for the people actually responsible for making these decisions.

The NFL is only like the NBA in terms of how quickly drafted players are expected to produce at a high level. The MLB is unique in that drafted players almost never see the field immediately, but rather end up in the complicated minor league system, that teams use to develop and prepare players. Meanwhile the NHL’s line system often limits how impactful a single player can be. Also, the fact that many NHL players are drafted while they are still in school and that many skilled players come from foreign countries, help limit the importance of the draft in the NHL. In the NBA, the draft can be extremely important, just look at Lebron James, the league would have been a different place if he ended up somewhere besides Cleveland. However, the frequency of major trades, the lottery system, and free agent signings–again look at Lebron James–diminish the value of the NBA draft to a point just below the NFL draft. The NFL draft is an extremely important event where teams can shape the future of their franchise. While not every NFL star was a top pick, nearly every single top pick is expected to make a major impact for their team.

All the importance adds up to a tremendous amount of pressure, unlike the NBA’s lottery, in the NFL the worst team is going to end up with the best pick, and executives have to decide what position and which player they need to draft. The fallout of failure can be great; if teams are unable to draft the right players they might find themselves at the bottom of the league over and over again. The Oakland Raiders can speak to this problem as they seem to have not been able to put together a solid draft in years, forgoing Pro-bowl staples like Aaron Rodgers, Larry Fitzgerald, and Calvin Johnson for players who are either out of the league like Jamarcus Russell, or out of favor like Darren McFadden. Of course if drafting the right players was so easy then no franchise would ever be stuck at the bottom of the league. It is hard to tell if your late round pick is going to be Tom Brady or if your top pick is going to be Jamarcus Russell. It is also very difficult to look at the past to predict the future; would Tom Brady still be as dominant if he was drafted by the Raiders? Would he have even seen the field?

These uncertainties make life brutal for executives whose jobs depend on making the right selection in the draft. Fortunately, my job does not depend on who I think is the best prospect in the draft, so I feel far more comfortable openly discussing what I think the best strategy is for any NFL draft. The NFL in this day and age is a quarterback driven league; if you have a top pick in the draft it is probably because you had a mess at quarterback during the season. The Texans, Browns, and Jaguars all went through a slew of struggling quarterbacks this past season, and that is one of the main reasons they now hold some of the best picks in this year’s draft. While there is talk about how Jadeveon Clowney is a can’t miss talent, I personally would be drafting a quarterback with several of the earliest picks in this year’s draft. There are enough quarterbacks that all have the potential to be game changing players that I think more of them should be going early in the first round than what is projected.

Quarterbacks can be the most impactful player in a football game because a team can’t prevent them from being involved in a play. Even if Clowney is a tremendous NFL player, teams could theoretically work to the opposite side of the field to limit his impact. I can’t understate the importance of the other positions which make quarterbacks look good or put them in positions to win games, but frankly even a good defensive end or wide receiver can’t win you a game, but a quarterback can. A quarterback can be the face of a franchise and fill once vacant stadiums. Sure there are big name wide receivers, but nobody would have heard of Calvin Johnson if he had Mark Sanchez one-hopping the ball to him every play. Therefore, in my not-so-professional opinion I would be drafting whichever of the quarterbacks that the Texans are highest on with the first overall pick. A failed quarterback can set a franchise back several years (see: NY Jets) but I’m not convinced that some of the worst teams in the NFL can improve significantly without address their quarterback issues.

Whether or not you agree with me in saying that the NFL draft might be the most important draft in major professional sports, it is hard to argue that there isn’t a lot of pressure in the draft for what is, ultimately, America’s most popular sport. Futures of franchises are at stake and therefore many people have their job on the line, especially for the worst of the worst. However, in my opinion there is a general rule to follow to minimize your risk and maximize your success: draft a quarterback. Frankly I just don’t see any other position player being good enough to pull a horrible team into contention if their quarterback is bad. Look at the Vikings, who have arguably one of the best running backs of all time in Adrian Peterson, yet they have been held back for years by poor quarterback play. So, if I’m the Texans, Raiders, Browns, Jaguars, or other struggling team with a bad quarterback, I’m drafting one of the many talented signal callers in this year’s draft. 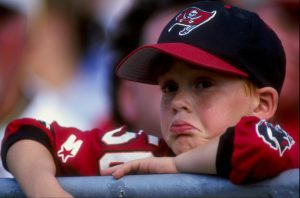