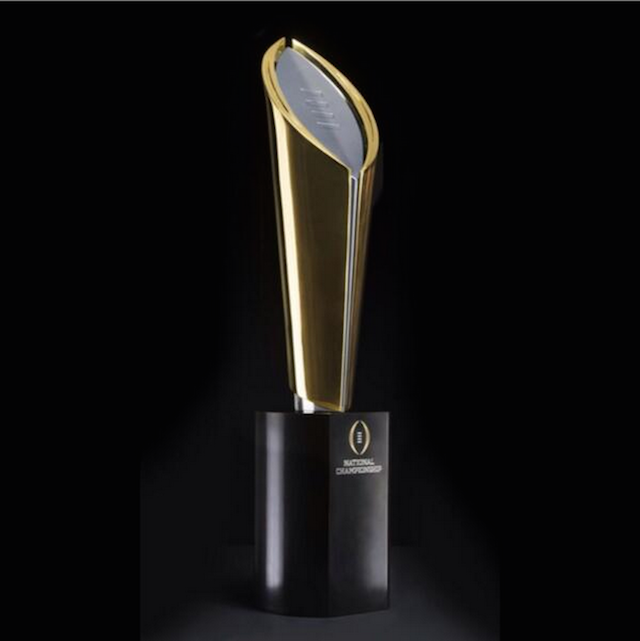 As multiple NCAA football conferences hold their title games later this weekend, one can only guess what teams will be participating in the second annual College Football Playoff. About eight to ten different schools are still in somewhat realistic contention for the four coveted spots in the CFB Playoff. Even though this system is a million times better than the former Bowl Championship Series, it’s already clear after only a year and a half that the CFB Playoff still needs some work. It won’t be perfect, and will never be perfect, but the playoff can certainly be improved from its current state. The four-team playoff must be expanded to at least eight teams. I would not be opposed to a sixteen team tournament, but eight seems more realistic, considering the NCAA’s hesitancy to implement a playoff system for its top football tier in the first place.

Just from a mathematical standpoint, expanding the playoff makes sense in comparison to other collegiate post-season systems. The Division 1 NCAA Basketball tournament offers 68/351 teams the opportunity to compete for a national championship (roughly 20% of the total number of D-1 universities). The FCS (Division 1-AA) NCAA football tournament offers 24/125 members a chance to compete for the title (again, roughly 20% of all teams). Division 1 Men’s Soccer offers 48/206 teams a postseason tournament berth (about 23%). Get the pattern? The NCAA seems to hover around giving 20% of the number of total teams in the league the opportunity to compete for a national championship. Except for the CFB Playoff. 4/128 teams is 3.1% of the league. Not good enough.

The four team system also eliminates the possibility of upsets. Who doesn’t love a good upset? Everyone roots for the underdog (unless its their team getting upset; fellow Georgetown fans understand the pain). Even from a Hoya’s standpoint, though, Florida Gulf Coast’s run in the 2013 NCAA Basketball tournament was admittedly a ton of fun. George Mason’s unlikely trip to the Final Four in 2006 was magical, and every upset every year is exciting to watch. Part of what makes the NCAA basketball tournament so special are fans’ tendencies to root for the underdog and support the underdog in the rest of the tourney. Sure, the underdogs usually don’t end up winning the title, but they constantly cause trouble in the bracket. In this four-team football playoff system, there is none of that. Last year’s CFB Playoff consisted of four blue-blood, elite football programs, none of which could possibly be considered an underdog: Alabama, Oregon, Florida State, and Ohio State. Even if a team from a mid-major conference went undefeated, I’m not sure that they’d be included in the four team playoff. Often, these mid-major teams can compete with the big boys, but do not have the strength of schedule or marquee wins to prove that they are a top four team based solely on their resumes. The 2006 Boise State Broncos are a great example, as are the 2004 and 2008 Utah Utes and the 2010 TCU Horned Frogs. All of these teams went undefeated and won a BCS bowl game versus a top power conference foe, proving that mid-major teams can compete at the highest level when given the opportunity, and should be given that opportunity. Expanding the playoff to eight or sixteen teams would give the selection committee the flexibility to allow one or two non-Power 5 conference teams to automatically qualify every year, giving these teams an annual shot at competing for the national championship.

Not only could underdogs from non-Power 5 conferences be included to spice up the tournament, but the committee could also include all realistic championship contenders if the playoff were expanded. Last year, the committee had a very difficult decision in choosing the fourth playoff team. Alabama, Oregon, and Florida State were deservingly considered locks for the first three seeds, but Ohio State, Baylor, and TCU were all in contention for that elusive fourth slot. Obviously, the committee made a good decision in choosing Ohio State since they ended up winning the national championship, but TCU or Baylor certainly could have been justified as well. In hindsight, however, TCU may have been able to compete for the national title as well, especially since they romped fellow top team Ole Miss 42-3 in the Chick-fil-A Peach Bowl after being left out of the national title hunt. That tells you something about the number of realistic contenders; the college football season is so short and there are so many good teams that there’s no way a clear distinction can be made between four out of the ten or so who are qualified to compete for the title. Last season, any of TCU (12-1), Baylor (11-2), Mississippi State (10-3), or even Michigan State (11-2) could have possibly made a run in the CFB Playoff. Limiting the playoff to four teams not only leaves out possible underdogs who could spice the competition up, but it also omits contenders who have the clear ability to compete for a title. The committee just doesn’t have slots to put them in.

This year has the same feeling as last year where real contenders could be excluded. Notre Dame (10-2), whose only two blemishes are by a combined four points to top ranked Clemson and seventh ranked Stanford, will certainly be left out. Two of Ohio State (10-1), Michigan State (10-1), and Iowa (11-0) most likely will not make the playoff. Stanford (10-2), barring complete chaos at the top, won’t make the playoff either. And then some fun potential underdogs from non-Power 5 conferences, like the American Athletic Conference’s Houston (11-1), Temple (10-2), and Navy (9-2), have absolutely no shot at being included. Even surprise teams from Power 5 conferences— Northwestern (10-2) and North Carolina (11-1)— have minimal shots at making the championship tournament.

The current College Football Playoff is lightyears ahead of the old bowl-based system, but it still should be improved and expanded to include more teams. There’s no way the committee can clearly distinguish four clear top teams out of the many possible contenders vying for playoff positions, whether it be last year, this year, or in the future. The playoff will be expanded eventually, but probably not as soon as it should be.

The playoff upsets you long for have already happened. Stanford is on the outside looking in because of their loss to Northwestern. Without that 2nd loss, they’d likely be taking the 4th spot from Oklahoma, who survived their own upset from Texas and came out on top of their bracket. USC was supposed to be a top team, too, but piled up too many losses, including an upset by Washington.

100% of FBS teams are eligible for the playoff, not 20%. While that may require some group of five schools to shuffle their scheduling to include a top team or two, it is doable by any FBS team. Navy is your George Mason. If they were undefeated, including an upset of Notre Dame, they’d be a top 4 champ and they’d be in the final four.

So keep it the way it is, please. I’d like to be able to sit back and enjoy the unique playoff that FBS has, but expansion advocates like yourself want to make the FBS playoff like all the others. AAUUUGGGGHHH!

Respectable opinion. I’ll preface this long response with the statement that I don’t think any mid-major team is talented enough to take a spot in the playoff this year. None are good enough now, but I’m worried about a real stud mid-major being omitted in the future. But, you implying that if a mid-major had been undefeated this year, they would have been top four, I disagree with. I do not think that at all. I don’t know if you read the linked article I had there in paragraph three, but look at it. It is pretty much impossible for a non-Power 5 team to make the top four.

I’ll use your suggestion, Navy, as an example. Assuming Navy won out and Clemson, OK, and AL win their title games (the most likely scenario)… how could it possibly be justified to include Navy over the B1G champion, either a one-loss Michigan State or an undefeated Iowa? Navy strength of schedule: 79, Iowa: 63, MSU: 53. Let’s compare marquee wins; NAVY: Notre Dame… Memphis? Houston?; IOWA: Northwestern, Wisconsin, Mich St.; MSU: Oregon, Michigan, Ohio St., Iowa. They don’t stack up. I think the B1G champ wins the resume battle fairly easily. Unless Navy was incredible as far as “eye test” and dominated all teams it played by 20+ (including Notre Dame), I don’t see any way it would have been included over the B1G champ, unless one of the other top three teams collapsed in its title game.

I know what you’re going to say: “well, why doesn’t Navy just increase its strength of schedule and play better teams non-conference, then?”. This will never be able to happen for mid majors, and here’s why. Mid majors aren’t consistent contenders. The way colleges schedule football games so far in advance (I mean, some are actually agreeing to games for the 2022 season already), a mid-major doesn’t know if 2022 will be an up year or a down year. Will they be undefeated looking to qualify for the playoff, or will they be 5-5 just trying to get in a bowl game? Not only is it hard to predict for the mid-major teams, but it’s hard for the good teams trying to schedule as well. You’re Nick Saban, and you get a call from Navy asking if you want to play them in 2022. If that call was from a top Power 5 team like Michigan, USC, Oregon, etc., maybe Saban entertains the offer. Navy? I doubt he considers it. When elite, blue-blood, annual contenders are trying to improve their OWN resumes for the playoff as well, why would they accept to play a Navy team who might stink that year and bring down their own SOS?

BEST case scenario for a non-Power 5’s schedule (taken from that article I linked): team is undefeated, dominated all games in conference (won by 15-20+), one marquee win over a top 15 team, rest of non conference schedule includes wins over decent Power-5 teams or mid-majors who often qualify for bowls. I think that’s the best realistic future resume possible for a very, very good mid-major team looking to make the tourney. Like I’m talking ’06 Boise, ’10 TCU good. They have that resume… I still don’t think they are a lock for the CFB Playoff. Obviously, that also depends on the rest of the contenders that year, but that’s still wrong. It’s just not possible for them to fill their schedule with enough meaningful games that can challenge the resume of a one-loss Power team (which is the likeliest competition for the 4th playoff slot).