Ed Sheeran’s performance this past Saturday at the Merriweather Post Pavilion stop on his Multiply tour was, in a word, faultless. From the crowd-pleasing sing-alongs, to the talented freestyle, to the acoustic melodies performed in typical Sheeran-esque fashion—the one-man band managed so much versatility in one show that even the reluctant fathers resembled their fanatic, screaming daughters by the end.

The event opened with a bang—literally—as the skies opened on unsuspecting fans in lawn chairs and flimsy concert attire. Only those well under the pavilion roof were spared from the thunderous downpour. By some concert-granting act of God, however, the storm cleared just as the opening act made their first appearance, allowing fans the chance to wring out their sopping clothes and settle in for the much-anticipated evening. Rudimental, the opening act hailing from Ed’s own motherland, commanded the stage with energy, charisma, and the most talented trumpet player I’ve seen in all my days. Totaling at seven people, their set was a dizzying collection of bass-driven, belting numbers that served to counterbalance the one-man-and-his-guitar main act that followed.

Sheeran’s casual entrance in a simple button-down with an acoustic guitar strapped across his chest was slightly offset by the gargantuan collection of screens that lined the backdrop of the stage. Opening with the ever-popular “Lego House,” the song’s simplicity was slightly lost in the overwhelming screen displays, with huge images of Legos bouncing across the stage. Still, Sheeran’s ability to connect with the audience and include them in his music was never lost to the overproduction – which was, for the most part, still enjoyable and complementary to the music.

For big hits, such as “Don’t” and “You Need Me”, Sheeran relished and even built off of audience participation to provide the background harmonies over which he could sing the chorus. For the softer melodies, Sheeran welcomed the soft, slightly off-key singing of the crowd and even briefly paused during “The A-Team” to take a picture of the sea of twinkly iPhone lights swaying back and forth with the melody. Only for “Afire Love” did Sheeran kindly request the audience to remain silent, as the screens faded to a single spotlight, leaving the audience to bask without distraction in the elegantly understated melody and melancholic text.

Finishing the set strong with his newest and arguably biggest hit, “Sing”, Sheeran left the audience with the final command, “I want you to wake up tomorrow and still be singing,” walking casually off-stage, leaving the crowd still singing for several measures in his absence. It was a concert that displayed his talent in only the best of ways and considering I’ve still got Sheeran playing through my headphones as I walk to and from classes, I’d say his request has been thoroughly fulfilled. 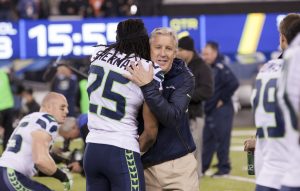