In lieu of a performance from its original cast members after they were denied visas to the U.S., Georgetown will host Voices Unheard: Syria: The Trojan Women Summit this weekend. The Laboratory for Global Performance and Politics is presenting the political event on Friday, Sept. 19 at 7:30 p.m. in the Gonda Theatre at Georgetown’s Davis Performing Arts Center.

Their original performance, Syria:  The Trojan Women, weaved the personal experiences of the 12 female cast members who fled their homes to live as refugees in a 21st-century conflict into Euripides’ 2,500 year-old script about the women of Troy post-Trojan War.  After premiering in December 2013 in Amman, Jordan, Georgetown invited the cast to perform in Washington, D.C., on Sept. 18 for its first North American performance.

“It’s really an extraordinary thing that this play written by Euripides about the devastating impact of the Trojan war applies so directly for these women about their own experiences in Syria,” said Cynthia Schneider, Professor in the Practice of Diplomacy and Co-Director of the Lab.

The summit that will take the place of the performance includes excerpts of the play, behind-the-scene documentary footages, and live discussion with the Syrian refugee women of the cast via live-stream from Amman, originators of the project, and the leading Syrian director Omar Abu Saada.

Policy experts and artists will also discuss the political realities of the region and the role of art as a humanizing force, including Honey Al Sayed, producer and co-founder of SouriaLi Radio; Faisal Al-Juburi, executive director of Bridges of Understanding; Dale Gavlak, BBC and CNN correspondent in Amman; Faysal Itani, resident fellow in the Rafik Hariri Center for the Middle East; and Hind Kabawat, Senior Program Officer in United States Institutes of Peace, Syria.

Despite months of efforts and communication on the women’s behalf from top officials, ambassadors, and lawyers, the U.S. Bureau of Consular Affairs in Amman denied the visa applications of the actresses under section 214b of the Immigrant and Nationality Act: “failure to demonstrate non-immigrant intent.”

“We had one comment that this confirms their worst fears about the United States that their story doesn’t matter here,” said Professor Derek Goldman, artistic director of the Davis Performing Arts Center and co-director of the Lab. “At the same time, we’ve experienced this outpouring of  support for the project, so those emotions are all entwined.”

Goldman also commented on the negative response in the U.S. regarding the efforts of bringing the Syrian performance group. “If you read the thread of comments for the NPR or the Washington Post piece, there are comments about why would we let terrorists into the country, and other unbelievably ignorant, prejudiced comments,” said Goldman. “The best antidote to those kinds of sentiments is an artwork like which exposes and combat these stereotypes about the Muslim community.”

Schneider further emphasized the reality of the conflicts that the Syrian performance group faces. “It’s really easy to talk about this conflict in terms of geopolitics with the division of sides—Russian Iran siding with Assad, United States building its own coalition against them—so it’s so easy to lose track of the human impact.” she said. “There are three million Syrian refugees out of the country now, and these women are just a small fraction of that.”

After joining the summit at Georgetown, the Syria Trojan Women project will continue with various works, including a performance funded by the Talberg Institute at the European Organization for Nuclear Research, known as CERN, in Geneva, Switzerland, in November of this year.

Voices Unheard: Syria: The Trojan Women Summit is the first anchoring event of the Myriad Voices Festival, a two-year project where artists share their work about issues in the Middle East with scholars, policymakers, faculty, and students at Georgetown.

Schneider’s hopes for student engagement with the event are threefold.  “I hope that the students have a deeper understanding of the human consequences of this conflict. I hope that they come away with this awareness of the very important role that culture and creative expressions play in emerging from conflicts,” she said. “Finally, I hope everyone will come away with a deeper understanding of the complexity of foreign policies and decision making in these situations.”

Online tickets for the summit have sold out, but students can contact the Georgetown University Department of Performing Arts Box for information on additional ticket availability. 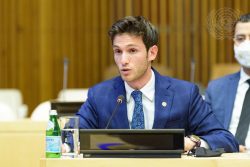