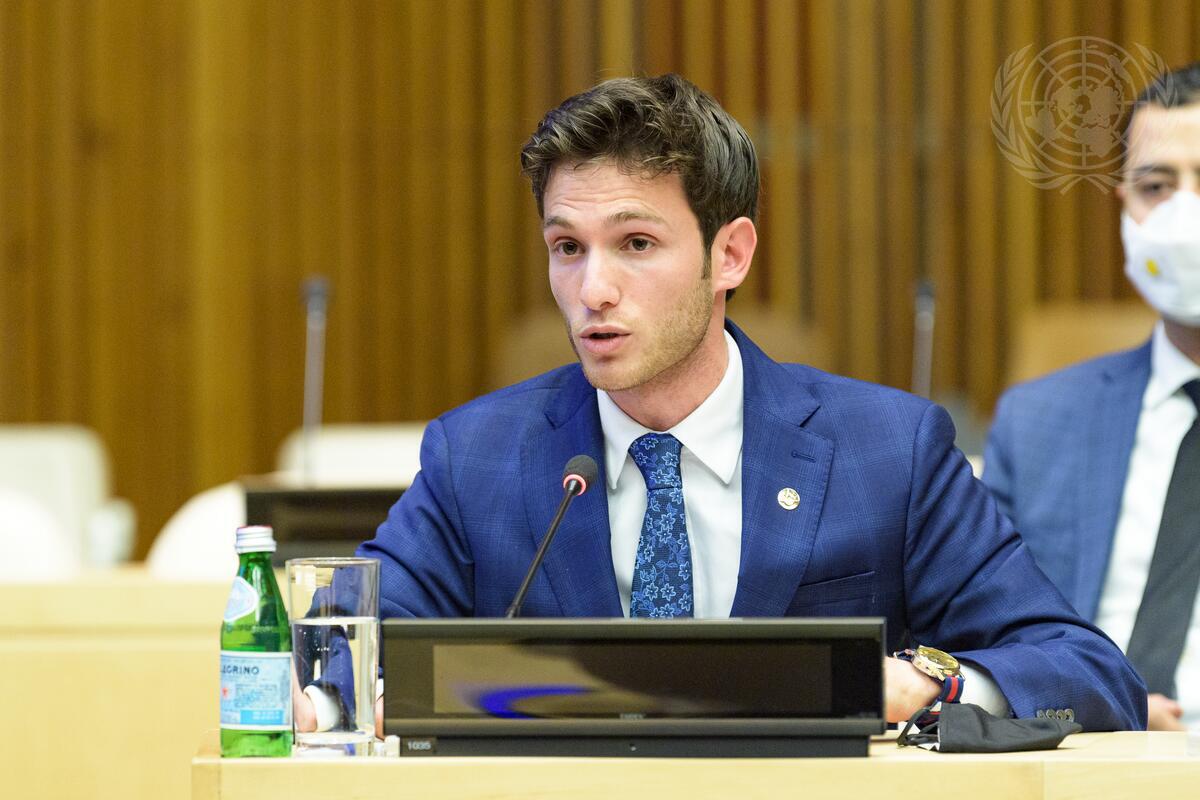 Omar Alshogre (COL ’24) spoke at the recent UN Security Council (UNSC) Arria-formula meeting, urging the Council to support accountability and justice efforts for victims of the international crimes committed by the Syrian regime since the beginning of the country’s now decade-long conflict.

At the age of 15, Alshogre was arrested by Bashar al-Assad’s forces for participating in anti-government protests and spent three years in prison. In a powerful and passionate personal testimony, he spoke about his own experiences inside Assad’s prisons and the family members killed by order of the regime. Alshogre expressed his frustration with the international community’s inaction to stop the ongoing human rights violations in Syria.

“I could have been one of those 350,000 people [killed in Syria]. As a child, I was detained by the Syrian regime. For three years, I was starved and tortured within an inch of my life. Instead, I’m standing before you today as an example of an innocent life saved,” Alshogre said before the Council.

This informal gathering enabled members of the UNSC to hear guest testimonies related to the Council’s failure to refer Syria to the International Criminal Court (ICC) despite a large body of evidence and support from dozens of countries.

The ICC can only prosecute states that are signatories of the Rome Statute, an international treaty that established the Court in 1988. The 2014 Security Council resolution aimed at granting the ICC jurisdiction to investigate and prosecute war crimes or crimes against humanity in Syria failed after a veto from Russia and China, two permanent UNSC members and allies of the Syrian regime.

The two allies have repeatedly used their veto power to block the implementation of any accountability process for crimes committed by the Assad regime and other actors, including the Islamic State or ISIS. Russia vetoed the renewal of the Joint-Investigative Mechanism in Nov. 2017 after it concluded that the Syrian regime was responsible for the Khan Sheikhoun chemical attack, in which the nerve agent sarin killed dozens of people, including children. Since 2011, Russia has used its veto power 16 times to block resolutions on Syria—with nine backed by China.

In response to the gridlock in the UNSC, the UN General Assembly established the ​​International, Impartial and Independent Mechanism (IIIM) through a 105-15 vote in 2016. The IIIM’s mandate to “collect, consolidate, preserve and analyze” evidence of international crimes in Syria for use in criminal proceedings aims to further the process of accountability and justice. Originally voluntarily funded, the Mechanism was included in the 2019 budget and passed against the objections of Syria and its main allies: Russia, China, and Iran.

“Obviously, they’re frustrated because in the Security Council they’ve been able to block anything in regard to the crisis in Syria. Every resolution it’s been offered, even the most minor criticism of the horrible crimes committed by the Assad regime, the Russians have threatened to veto,” Stephen Rapp, former United States Ambassador for War Crimes Issues, said in a phone interview.

Since its creation, Russia and China have repeatedly expressed their opposition to the IIIM, arguing that it is illegitimate and violates the principles of sovereignty enshrined in the UN Charter. The General Assembly, however, has the power to establish subsidiary organs under Article 22 and act on matters where the UNSC ends up in stalemate in order to maintain “international peace and security.” IIIM does not have any prosecutorial powers and can only collect and analyze evidence without entering Syria’s sovereignty.

“It may be very difficult for the IIIM to gather information within Syria and the UN generally doesn’t cross borders without the country’s permission, but that doesn’t keep civil society groups, and people from Syria, like Omar Alshogre, from providing evidence to it,” Rapp added.

In August 2013, a former Syrian military photographer and key whistleblower known by the alias “Caesar” revealed a large body of evidence incriminating Assad of crimes against humanity. Caesar smuggled out of Syria over 53,000 highly graphic photographs (CW) documenting acts of torture, rape, and extrajudicial killings committed by the Syrian regime in its prisons in only two years. The Federal Bureau of Investigation (FBI) authenticated the files, and human rights organizations investigated further.

Rapp, who has served as the Chief Prosecutor of the Special Court for Sierra Leone and Chief of Prosecutions at the International Criminal Tribunal for Rwanda, stressed the strength of the evidence implicating Assad, saying it is more directly incriminating than what was used to prosecute the Nazis during the Nuremberg Trials.

“Hitler’s signature doesn’t appear on any page [presented at the Nuremberg trials], unlike the fact that Assad’s signature appears on many of the pages that we have in the Caesar files that are now at the IIIM. So we’ve got more direct implications of the hands of Assad than we do with Hitler,” Rapp said. “We’re able to connect the crime from the top to the bottom, from the beginning to the end, right to the victim.”

The crimes shown in the Caesar photos were not abstract for Alshogre. During his time at Branch 215, commonly referred to as the “Branch of Death” by former detainees, he was tasked with numbering piles of dead bodies—including those of his friends and family—before they were photographed.

“During my horrible years in Assad’s prison, there was a single month where it was different. There was less torture, more food, I was even numbering fewer dead human beings,” Alshogre said in his testimony.

After he was released, Alshogre found the minor improvements in prison conditions during that one month followed the public release of the Ceasar files.

“The guards feared that they would actually be held accountable but unfortunately, the world turned away and the machinery of death continued. It was only one month,” Alshogre said.

In the absence of an international court, some countries such as Germany are taking national efforts using the principle of “universal jurisdiction” to promote justice. In April 2020, a German Court in Koblenz put two former members of the Syrian intelligence services, Eyad Al-Gharib and Anwar Raslan, on trial under German Codes of Crime against International Law. Earlier this year, in a landmark ruling, the court sentenced Al-Gharib to four and half years in prison for aiding and abetting crimes against humanity. Raslan, a more senior ex-official, is charged with directly overseeing the systematic torture of at least 4,000 people and 55 cases of murder in Syria’s Al-Khatib Detention Center. As his trial reaches an end, German prosecutors are asking for life imprisonment, and a verdict is expected in the coming weeks.

“In my view, the Court’s finding that as from April 2011 the Assad regime has been orchestrating a criminal campaign of killing arbitrary detention and torture against its own civilian population constitutes the most important element of the Koblenz’s judgment,” Claus Kress, a professor of criminal and international law at the University of Cologne, said during the Arria-formula meeting.

While the Al-Gharib case has set an important precedent for future and ongoing national criminal trials in other countries, national courts often fall short of prosecuting those most responsible for the egregious and systematic human rights violations against the Syrian population. Only the ICC can investigate and prosecute the top-ranking culprits within the Assad regime.

“As I mentioned during the meeting, empty statements are never helpful. And that’s exactly what we could see in Denmark’s statement. They condemned the brutality of the Assad regime, but their current treatment of Syrian refugees says the opposite. Actions speak louder than words,” Alshogre said in a phone interview.

Despite expressing concern over abuses of humanitarian law in Syria, the Danish Immigration Service’s country of origin (COI) report on Syria deemed Damascus and the government-controlled areas “safe.” Earlier this year, Denmark became the first European country to revoke the residency status of hundreds of Syrian refugees utilizing this argument.

Reports from human rights agencies suggested the decision was premature. Amnesty International released a report detailing cases in which Syrian refugees who returned to Syria were subject to detention, forced disappearance, torture, and even death by the regime. Human Rights Watch also put out a report detailing instances of human rights abuses and persecution against returnees from Lebanon and Jordan in the last four years.

“Despite the psychological trauma that they experienced in Syria, refugees had to start from scratch and build a new home for themselves in difficult conditions,” Setareh Soroush, women’s rights coordinator at the Middle East Matters Organization, said. “Many Syrians who fled the country no longer have a home to return to, as their homes were demolished during the war.”

The majority of those interviewed by the Human Rights Watch also expressed frustration over living conditions considering Syria’s economy has shrunk by around 60 percent since 2011, according to the World Bank. Both reports concluded that Syria is not safe for return and violates the UN Refugee Convention, which Denmark was the first to join in 1951.

Since 2011, over 350,000 people have been killed in Syria. Tens of thousands of people have been forcefully detained and disappeared. Over half the county’s population has been displaced, creating the largest refugee crisis in the world.

“My family—my father and my brothers—were massacred; they are gone. it is too late to save them.” Alshogre said to the UNSC. “But there are millions that can still be saved, and this is my biggest ask: that you save them. That you stop the ongoing crimes; that you stop the killing in Syria.”