This weekend has the potential to be a sensational one in the Premier League, with two major derbies on Saturday. First comes the always fiery Merseyside derby, in which Liverpool and Everton battle for superiority in the city of Liverpool. Then Arsenal will meet Tottenham, where two of the biggest English sides will challenge each other for dominance in North London. None of these teams have gotten off to a quick start so far, but you can bet your life savings that all four of them will come out with guns blazing tomorrow. Let’s break down these two promising matches.

This matchup is ill-tempered, passionate and almost always guarantees some cards for both sides.  Last season produced two great Merseyside derbies, with the two teams playing out a 3-3 draw at Goodison before Liverpool shellacked Everton 4-0 at Anfield.

The season has started slowly for both of these teams. Liverpool have taken just six points from their first five games, with a lack of clinical finishing up top and mistakes at the back largely to blame. In their last two matches, Liverpool have succumbed to early defensive lapses and then been unable to break down their opponents. Two weeks ago, Aston Villa came out to an early lead and held on for the full 90 minutes.  Last week West Ham followed the same formula, putting two past Simon Mignolet in the first 10 minutes and not allowing the Reds to recover.

After last season’s strong showing, Everton fans had high hopes, but the side have also struggled, with just one win in their first five games. The club had signed two of its top performers to long-term deals in Romelu Lukaku and Gareth Barry, and brought in both Muhamed Besic and Christian Atsu (both of whom impressed at the World Cup), as well as Samuel Eto’o. But Everton’s strong squad has failed to live up to expectations so far. While they are powerful and exciting going forward, their defensive performances have been woeful. Take last week’s match against Crystal Palace, where they drew first blood before throwing away the game with costly errors at the back.

Tomorrow is likely to be a gritty but exciting day in Liverpool. Everton’s attack has firepower to get them some goals, but their affinity for mistakes will likely cost them tomorrow against a Liverpool side that will be looking for a big win at home. Liverpool must be careful against Everton’s counter, with Leighton Baines and Seamus Coleman providing plenty of pace and support to Kevin Mirallas and Aidan McGeady. Liverpool’s own attack, while far below the level it showed a year ago, should be enough to score, although the Reds’ own defensive lapses could hurt them.

For the late kickoff, Spurs will be traveling to Emirates Stadium for the North London derby. While not usually as chippy as the Merseyside derby, this game is always action-packed, with plenty of attacking and bucket-loads of goals for each team.

Arsenal has been the least disappointing of these four derby participants. They are currently undefeated (the only other team that is undefeated is Chelsea), but none of their performances have been inspiring. They needed a 90th minute winner from Aaron Ramsey against Crystal Palace and then played out three draws. As the season has gone on, they have shown signs of improvement.  They battled hard and would have beaten City had Martin Demichelis not salvaged a point for City with a late header, and then easily handled a weak Aston Villa side. With Giroud out until October, Arsenal can’t offer a threatening option at striker. Danny Welbeck fits well into Arsene Wenger’s pass-and-move style of play but his finishing leaves a lot to be desired, especially facing a fairly tough Spurs defense. But if Mesut Ozil shows the superior form he displayed against Villa, Arsenal should be able to put the ball into the net.

When Spurs sold Gareth Bale for an amount of money I don’t even want to type out because it was so much, I thought they would be able to use that money to buy some quality players. And they did. They brought in Christian Eriksen, who was sensational at Ajax and continues to be impress at Spurs. But they also bought guys like Nacer Chadli and Roberto Soldado, who haven’t been so sensational. They failed to get back into the top four last year and had to settle for a Europa League spot. But with Mauricio Pochettino and his fluid attacking style now reigning at White Hart Lane, I expect more from Spurs this season.

However, two concerns for Spurs fans remain. One is their lack of quality up top (which seems to be a concern for a surprising number of clubs these days). Emmanuel Adebayor is well past his prime, and Roberto Soldado…well, just watch this again. The other is their defense. The combination of a new manager and so many recently added players has led to an adjustment period. No one has any idea how long the players will take to adapt to a new system (if they adapt at all). But their back line is young and exciting, and guys like Eric Dier will fit in very well at White Hart Lane.

Spurs desperately need their attack to come through for them in the final third. An early goal will take off some of the pressure and allow their back line to relax and push up. But Arsenal look like they will be the stronger side tomorrow. If Mesut Ozil can get Danny Welbeck good looks, he’ll put some away eventually, and with Aaron Ramsey continuing his goal-scoring form from last season and Alexis Sanchez loving the free reign Wenger has given him down the wings, I think Arsenal will ultimately come away with a comfortable win. 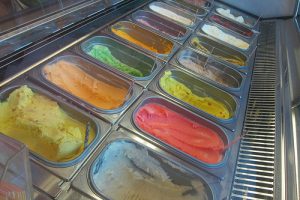 The Ice Cream Flavor You Deserve