There was barely a minute left in the first half of the Super Bowl when Jake Delhomme threw a bomb downfield, Carolina fans were hoping with all they had that their star receiver could tie up the game before the half. Sure enough, on the other end of the pass, Steve Smith eluded his defender and scored a touchdown for the Panthers, something he had done many times before and would do frequently in the future. Smith would finish that game with four catches for eighty yards and a touchdown, as the Panthers came just short of what would have been the franchise’s first Super Bowl victory.

Over the next nine years, Smith would become the undisputed best player in franchise history, ending his time with the Panthers with seven 1000-yard seasons and over 12,000 total yards in thirteen seasons. The receiver represented Carolina in the pro bowl five times, and was selected to the NFL’s all-pro first team twice, in 2001 and 2005. He would see the franchise at its highest and lowest points, from their Super Bowl appearance in 2004 to their 2-14 season in 2010. All the way, Smith was the heart of the team that had taken a chance on him in the third round of the 2001 NFL draft, reviving the Panthers’ spirit with energized touchdown celebrations and equally animated taunts and trash talk. Yet, when reports of team dissent between Smith and quarterback Cam Newton arose, the Panthers seemed to forget the past. When they let Smith walk after the 2013 season, the Panthers sent a message loud and clear: the locker room was Cam’s. It was his team; and he was their future, while Smith was their past.

Bitter and forgotten, Smith was picked up by the Baltimore Ravens, where he issued a blood-curdling warning to the former team that had shunned him, proclaiming, “If you f—- think I can’t play? You gonna find out week 4.” He promised “blood and guts” for the matchup against the quarterback that had taken his team away. It was textbook Steve Smith; tough, feisty, and angry. And for the first three weeks, it seemed like he had every right to be, averaging ten targets a game and twice gaining over a hundred yards. He had the look of a top wide receiver and Joe Flacco’s favorite target.

Then came game day. Gone were the trash talk and cheap outbursts. Gone was the petty bitterness and childish resentment. In its place was determination. Donning an “I Love Haters” hat when he arrived at the stadium for game day, Steve Smith had the look of his younger self: focused and ruthless. Where we had become so used to seeing arrogance and trash talk, we saw absolute determination instead. It showed when Smith broke a tackle behind the line of scrimmage on his first reception and scrambled for a first down. It showed when he capitalized on a tipped ball and turned it into a 60-yard touchdown reception. And it showed when he flew past his defender to grab his second touchdown pass for the day to put his Ravens up 21-7 before the half. All in all, Smith finished with two touchdowns and over 130 total yards of production, leading the Ravens to an absolute rout of Cam’s Panthers.

He didn’t have to say anything. We knew. The Panthers knew. They had disgraced the best player to ever don the Panther uniform, a legend in his own right. Worse, they had pissed him off. Now, Smith is on pace for over 1,700 yards on the season, something he’s never done in his storied career. When it was all said and done, Smith could hold it in no longer, declaring, “That film is a coaching session. I’m 35 years old and I ran around those boys like they were schoolyard kids.” And he was right. Jerricho Cotchery, Kelvin Benjamin, and the rest of the Panthers’ young receiving corps that was supposed to replace Smith looked like a band of children compared to the season veteran that was on his way to a career year. Seeing Smith in a Ravens uniform is about as strange as seeing Devin Hester in a Falcons uniform, but no matter where he is playing, Steve Smith Sr. is a legend, as he kindly reminded the world last Sunday. 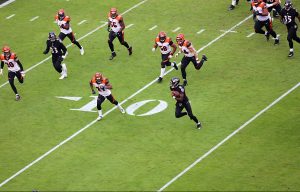 What’s in Store for Lamar Jackson? Looking Back at the Greatest Dual-Threat QBs in History