On October 31, 2010, a 21 year-old Madison Bumgarner took the hill for the Giants in Game 4 of the World Series against the Texas Rangers. The 6’5 left hander would throw eight shutout innings, becoming the youngest starter ever to make a World Series start of six or more scoreless innings. Since that day, the youngster was often overshadowed in his development by the incumbents in the always-impressive Giants rotation. With two-time Cy Young Award winner Tim Lincecum and fellow ace Matt Cain occupying the forefront of the staff, Bumgarner was sometimes the forgotten man as he worked towards living up to his top-prospect past. However, just four years later, the Giants are once again well into another deep playoff run. And who is anchoring the staff this time around? Not Lincecum, not Cain, but the brilliant Madison Bumgarner.

An 18-game winner, the tall lefty posted a 2.98 ERA, striking out over 200 batters during the 2014 regular season. However, none of his regular season numbers were particularly dominant or Kershaw-esque when viewed in comparison to the league. He finished no higher than fourth in any notable pitching category-he was fourth in the league in innings pitched and fourth in strikeouts. Of course, 18-8 with a sub-3 ERA is nothing to sneeze at, but it seems as though Bumgarner may have made the type of switch into postseason overdrive that so many legendary pitchers over the years have. In fact, Bumgarner’s performance in the postseason thus far has rendered his regular season stats the stuff of #5 starters.

In three postseason starts in 2014, Bumgarner has a microscopic 0.76 ERA. First, he kicked off the National League playoffs with a start in Pittsburgh in the Wild Card game. In a do-or-die situation, Bumgarner hurled a three-hit shutout over the Pirates, propelling the Giants to a series against the NL-best Nationals. Next, he allowed two earned runs over 7 innings, taking a hard-luck loss at home against the Nationals in Game 3 of the NLDS with the Giants looking for a sweep. After the Giants defeated Washington in Game 4, they earned a showdown against their fellow National League powerhouse St. Louis Cardinals. For the Cardinals, the series marked their fourth straight National League Championship Series appearance. The Giants handed the ball to Bumgarner for Game 1 to oppose Cardinals’ postseason hero Adam Wainwright- a daunting task for any 25 year-old.  In what was perhaps the best performance of his career, Bumgarner not only matched Wainwright, but out-duelled him, eventually pitching into the 8th inning while allowing nothing but zeroes across the board.  Thanks to Bumgarner, the Giants took a vital 1-0 series lead against a perennial World Series team and its biggest postseason asset.

Now, the Giants are set up nicely for the remainder of the series. With young 2013 playoff star Michael Wacha injured for the remainder of the year, the Cardinals do not have a clear stopper behind Wainwright. While Lance Lynn and John Lackey are proven, they certainly do not match the presence nor the electricity of Wainwright or Wacha. Yet again, Bumgarner has given the Giants another huge lift.

For Bumgarner and his legacy, this postseason holds significant meaning. While he has certainly already constructed a tremendous postseason resume at his young age, Bumgarner has the chance to become one of the all-time playoff greats. If he continues to throw lights-out baseball well into future Octoboers, Bumgarner will soon be included in the conversation with the Wainwrights of the game.  In fact, if the Giants complete this playoff run as World Champions, Bumgarner will have won three World Series rings before the age of 26- and his three rings will have surpassed Wainwright’s two. Quietly, while Lincecum and Cain have experienced their respective ups and downs across the years, the constant has been Bumgarner. And don’t look now-but he may be remembered as the best of that trio. 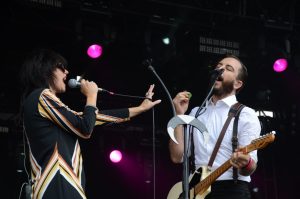